The logo represents both the company and its noise reduction system

dbx is a family of noise reduction systems developed by the company of the same name. The most common implementations are dbx Type I and dbx Type II for analog tape recording and, less commonly, vinyl LPs. A separate implementation, known as dbx-TV, is part of the MTS system used to provide stereo sound to North American and certain other TV systems. The company – dbx, Inc. – was also involved with Dynamic Noise Reduction (DNR) systems. 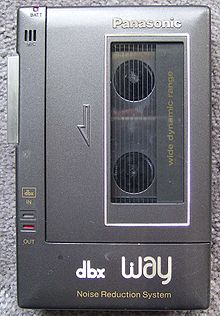 The original dbx Type I and Type II systems were based on so-called "linear decibel companding" - compressing the signal on recording and expanding it on playback. It was invented by David E. Blackmer of dbx, Inc. in 1971.

A miniature dbx Type II decoder on an integrated circuit was created in 1982 for use in portable and car audio, although only a few devices took advantage of it, such as certain Panasonic portable cassette players and Sanyo car stereos.[1] dbx marketed the PPA-1 Silencer, a decoder that could be used with non-dbx players such as the Sony Walkman.[2] A version of this chip also contained a Dolby B-compatible noise reduction decoder, described as dbx Type B noise reduction; this was possible after the Dolby patent (but not the trademark) had expired.

Because dbx Type I and Type II are broadband (single-band) companders (unlike Dolby-A's four bands), they are susceptible to audible noise modulation and other artifacts. To deal with this, both Type I and II use very strong high-frequency pre-emphasis of the audio signal in both the recording path and the control signal path. This causes the compander to 'back off' the gain in certain circumstances and reduce the audibility of noise modulation – even with this pre-emphasis, noise modulation can become audible when using very noisy media to begin with, such as the Compact Cassette format. In the control signal path, the dbx Type II process rolls off the high and low frequency response to desensitize the system to frequency response errors – since the roll-off is only in the control path, it does not affect the audible sound.

The dbx Type-II "disc" setting on consumer dbx decoders adds an additional 1–3 dB of low-frequency roll-off in both the audio path and control path. This protects the system from audible mistracking due to record warps and low-frequency rumble.

The dbx Type I system is meant to be used with recording media that have a S/N, before noise reduction, of at least 60 db and a -3 db frequency response of at least 30 Hz to 15 kHz. dbx Type-II is for more noisy media that have a lower S/N and much more restricted frequency response. Both systems use 2:1 companding and provide exactly the same amount of NR and dynamic range improvement – in other words, they provide the same end results, but are not at all compatible with each other.

A sometimes noticeable artifact of dbx was "breathing", as its compander rapidly increased and decreased the volume level of the background noise along with the music, which was most noticeable in quiet musical passages; this was a greater issue with dbx than with Dolby because its compander was more aggressive and worked across the frequency spectrum.[1]

Lack of DBX acceptance in marketplace

Although it brought extraordinary dynamic range to the lowly cassette tape, dbx noise reduction did not achieve widespread popularity in the consumer marketplace, as compressed recordings did not sound acceptable when played back on non-dbx equipment; Dolby B was already widely used when dbx was introduced. Although Dolby noise reduction also used some companding, the level of compression and expansion was very mild, so that the sound of Dolby-encoded tapes was acceptable to consumers when played back on non-Dolby equipment.

While dbx Type-II NR was eventually designed into a self-contained LSI chip, it was never cheap due to the extremely high precision required of the dbx VCAs and the RMS signal analysis, leading to further reluctance of manufacturers to use the dbx chips in their products.

dbx was also used on vinyl records, from 1973 until around 1982, and over 1100 albums were released with dbx encoding, which were known as dbx discs. When employed on LPs, the dbx Type-II system reduced the audibility of dust and scratches, reducing them to tiny pops and clicks (if they were audible at all) and also completely eliminated record surface noise. dbx encoded LPs had, in theory, a dynamic range of up to 120db.[3] In addition, dbx LPs were produced from only the original master tapes, with no copies being used, and pressed only on heavy, virgin vinyl. Most were released in limited quantities with premium pricing.

the dbx k9 noise reduction card was designed to fit into the pro dolby-A series A-361 frames, already in wide use in pro reel-to-reel recording studios of the time.

dbx-TV noise reduction, while having elements in common with Type I and Type II, is different in fundamental ways, and was developed by Mark Davis (then of dbx, now of Dolby Labs) in the early 1980s.

dbx-TV is included in multichannel television sound (MTS), the U.S. standard for stereo analog television transmission. Every TV device that decoded MTS originally required the payment of royalties, first to dbx, Inc., then to THAT Corporation which was spun off from dbx in 1989 and acquired its MTS patents in 1994; however, those patents expired worldwide in 2004.[2]

A modified version of dbx was also used in the Colortek stereo film system. In addition, dbx Type-II noise reduction was used in the Model-II and Model-III variants of MCA's Sensurround Special Effects System on the optical audio track and was a cornerstone of the entire system. MCA's Sensurround+Plus, used on the film Zoot Suit, employed dbx Type-II with the 4-track magnetic sound format on 35mm film prints, providing the motion picture with a stereo soundtrack capable of wide dynamic range and freedom from noise.

The first generation PRSS was a single channel per carrier system that had about 40dB of analog (recovered) signal to noise. dbx modules that were set for 3:1 were used to increase the dynamic range of the system. Typically this worked well but for some low frequencies the distortion exceeded 10 percent THD. Also the dbx modules varied in how they tracked the compressed audio so the expanded audio was not an exact representation of what was compressed at the uplink. Many of these problems were resolved when the PRSS moved to a digital delivery system.