The disability-adjusted life year (DALY) is a measure of overall disease burden, expressed as the number of years lost due to ill-health, disability or early death. Originally developed by Harvard University for the World Bank in 1990, the World Health Organization subsequently adopted the method in 2000. The DALY is becoming increasingly common in the field of public health and health impact assessment (HIA). It "extends the concept of potential years of life lost due to premature death...to include equivalent years of ‘healthy’ life lost by virtue of being in states of poor health or disability."[2] In so doing, mortality and morbidity are combined into a single, common metric.

Traditionally, health liabilities were expressed using one measure: (expected or average number of) Years of Life Lost (YLL). This measure does not take the impact of disability into account, which can be expressed by: Years Lived with Disability (YLD). DALYs are calculated by taking the sum of these two components. In a formula:

The DALY relies on an acceptance that the most appropriate measure of the effects of chronic illness is time, both time lost due to premature death and time spent disabled by disease. One DALY, therefore, is equal to one year of healthy life lost. Japanese life expectancy statistics are used as the standard for measuring premature death, as the Japanese have the longest life expectancies.[4]

Looking at the burden of disease via DALYs can reveal surprising things about a population's health. For example, the 1990 WHO report indicated that 5 of the 10 leading causes of disability were psychiatric conditions. Psychiatric and neurologic conditions account for 28% of all years lived with disability, but only 1.4% of all deaths and 1.1% of years of life lost. Thus, psychiatric disorders, while traditionally not regarded as a major epidemiological problem, are shown by consideration of disability years to have a huge impact on populations. 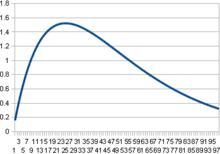 Some studies use DALYs calculated to place greater value on a year lived as a young adult. This formula produces average values around age 10 and age 55, a peak around age 25, and lowest values among very young children and very old people.

A crucial distinction among DALY studies is the use of "social weighting", in which the value of each year of life depends on age. Commonly, years lived as a young adult are valued more highly than years spent as a young child or older adult. This weighting system reflects society's interest in productivity and receiving a return on its investment in educating children. Society has invested relatively little in very young children, and it has already received a substantial return on its investment in older people. Young adults, however, have received the maximum amount of investment and, at the beginning of their working life, have had the least opportunity for society to benefit from its investment.

Where Y is the age at which the year is lived and W is the value assigned to it relative to an average value of 1.

The effects of the interplay between life expectancy and years lost, discounting, and social weighting are complex, depending on the severity and duration of illness. For example, the parameters used in the GBD 1990 study generally give greater weight to deaths at any year prior to age 39 than afterward, with the death of a newborn weighted at 33 DALYs and the death of someone aged 5–20 weighted at approximately 36 DALYs.[7]

PTSD rates for the 25 most populous countries

A table comparing the PTSD DALY rates for the world's 25 most populous countries may be found in the Epidemiology section of the Wikipedia Posttraumatic stress disorder (PTSD) article. Comparison of this rate across these countries makes clear that the region of the world most impacted by PTSD is Asia.