D. J. Williams (David John Williams) (26 June 1885 – 4 January 1970) was one of the foremost Welsh-language writers of the twentieth century and a prominent Welsh nationalist. 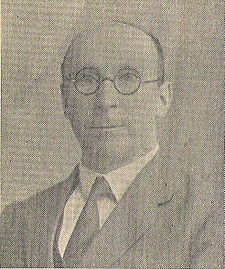 Williams was born in Rhydcymerau, Carmarthenshire. He studied English at the University College of Wales, Aberystwyth and Jesus College, Oxford. For most of his life he taught English at the grammar school in Fishguard, Pembrokeshire.

A socialist, he was one of the founders of Plaid Cymru, the Welsh National Party, in 1925. He took part, with Saunders Lewis and Lewis Valentine, in the symbolic burning of a bombing school at Penyberth in north-west Wales in 1936. As a result he spent nine months in Wormwood Scrubs prison.

Williams was a short story writer of renown and also the author of two volumes of autobiography. All his work is inspired by his vision of his native locality, of a close-knit community where common values give worth to all.

He died in 1970 at Rhydcymerau, Carmarthenshire.