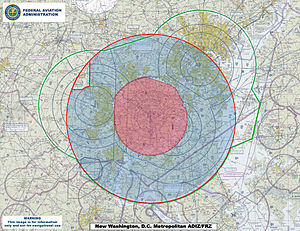 An Air Defense Identification Zone (ADIZ) has existed since February 10, 2003,[1] around the Baltimore-Washington Metropolitan Area to restrict air traffic near Washington, D.C.

The ADIZ was established after the September 11 attacks as a temporary measure to prevent further attacks. It was made permanent in 2008.[2]

Despite efforts by the Federal Aviation Administration to inform pilots of the ADIZ, there are still many unauthorized incursions by unsuspecting pilots. A pilot who violates the boundaries may be intercepted by military aircraft and escorted to the nearest airport, followed by suspension or revocation of the pilot's certificates.[3][4][5]

The ADIZ (now known collectively as a Flight Restricted Zone and Special Flight Rules Area) was created by the FAA in response to demands by a working group that became formalized as the National Capital Region Coordination Center. The U.S. Congress has never legitimized these restrictions, and any consideration of opposing the Executive Branch's actions became politically unpalatable in the wake of two mishaps that led to the evacuation of the Capitol[citation needed]. One involved a plane carrying Ernie Fletcher, the Governor of Kentucky. The other, almost a year later, involved a Cessna 150 flown by a student pilot accompanied by a pilot who was not familiar with the ADIZ rules, using an outdated chart.

Within the ADIZ is an even more sensitive zone designated the Washington, D.C. Metropolitan Area Flight Restricted Zone (DC FRZ). The DC FRZ extends approximately 13-15 nautical miles (15-17 statute miles) around the VOR/DME located at the Ronald Reagan Washington National Airport. Flight within the FRZ is restricted to governmental, certain scheduled commercial and a limited set of waivered flights. Three general aviation airports (known as the "Maryland 3" or the "DC 3") are located inside the DC FRZ. The "Maryland 3" are College Park Airport (CGS), Washington Executive/Hyde Field (W32), and Potomac Airport (VKX)[citation needed]. 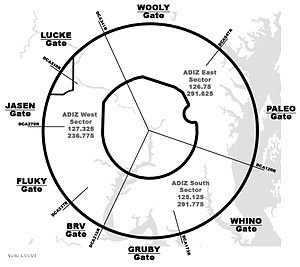 Pilots' groups, led by the Aircraft Owners and Pilots Association (AOPA), have argued that the ADIZ is unnecessary and has a harmful effect on the economy of small airports and aviation-related businesses in and near the ADIZ.[6] Pilots involved in law enforcement have described the ADIZ as a "major, unnecessary burden on pilots and air traffic controllers with almost no increased security benefit."[7] AOPA and other groups are hoping to persuade Congress to lift or ease the ADIZ restrictions from Washington airspace [1] -- or at the very least to dramatically improve its operational aspects.

In 2006 the FAA issued a Notice of Proposed Rulemaking (NPRM) docket number 17005 concerning making the temporary rules permanent. Over 20,000 responses were received the vast majority of them in opposition to making the temporary rules permanent. There were two public hearings held by the FAA in the Washington D.C. area on the NPRM. All speakers were opposed to making the NPRM permanent.[citation needed] The FAA published transcripts of the public hearings. The transcripts were later withdrawn from the public as they were alleged to contain Sensitive Security Information, but were returned following review.[8]

On February 9, 2009, any pilots flying VFR within a 60 nautical miles (110 km) radius centered on the ADIZ will be required to complete training about the ADIZ. This training can be completed online through a course called "Navigating the New DC ADIZ". Pilots may also complete the required training by attending a seminar offered at a Flight Standards District Office. Pilots must obtain a certificate which proves that the training has been completed. This certificate is not required to be carried with the pilot, but must be produced when requested from law enforcement or other agencies. Pilots flying IFR are not subject to this requirement.[9]

On February 17, 2009, the status of the ADIZ was scheduled to change from a Temporary Flight Restriction to a permanent Special Flight Rules Area.[8] On February 6, 2009, White House officials declined a request to postpone the implementation.[10]

The original Washington ADIZ was somewhat larger and was roughly co-extensive with the Airspace class airspace around Washington. On August 30, 2007, the ADIZ was changed to a circle surrounding Washington, D.C., with a radius of 30 nautical miles (60 km), with a small triangular cutout for Leesburg Executive Airport. This change reduced the size of the ADIZ by 1,800 square miles (4,700 km2) and removed 33 airports from its coverage. 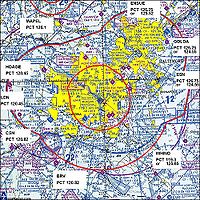 The old official entry and exit reference points for the ADIZ.