For a modern nation surrounded by potentially hostile neighbors, without access to the ocean, the Czechoslovak leadership needed to build a capable air force. So was born the motto "Air is our sea".

The Czechoslovak government between the wars balanced a home-grown aviation industry with licensing engine and aircraft designs from allied nations. Several major aircraft companies, and a few engine companies, thrived in Czechoslovakia during the 1930s. One well-known engine manufacturer was A. S. Walter located in Prague.

The Aero Company (Aero továrna letadel), was located in the Vysočany quarter of Prague. Its mixed construction (wood, metal and fabric covering) and all-metal aircraft were competitive in the early 1930s; however, by 1938, only its MB.200 (a licensed Bloch design) was not totally obsolete.

The Avia Company (Avia akciová společnost pro průmysl letecký Škoda), a branch of the enormous Škoda Works (Škodovy závody) for heavy machinery and defence industrial organization, was different. Founded in 1919 in an old sugar factory in the eastern Prague suburbs of Letňany and Čakovice, Avia made entire airplanes, including motors, which were usually licensed Hispano-Suiza designs. The standard Czechoslovak pursuit plane of the late 1930s, the B-534 reached a total production of 514 units. It was one of the last biplane fighters in operational use, and also one of the best ever produced.

The state-controlled Letov (Vojenská továrna na letadla Letov) was also situated in Letňany. It employed about 1,200 workers in the late 1930s, and it manufactured the Š-328 biplane, of which over 450 were produced. The entire airframe was welded together, not bolted or riveted. The Letov factory was the only Czechoslovak plant that manufactured metal propellers.

During this time, Czechoslovakia was divided into the "Protektorat Böhmen und Mähren" (Protectorate of Bohemia and Moravia) – a rump state directly controlled by Nazi Germany – and the Slovak Republic – a German puppet state.

Many Czechoslovak pilots successfully escaped to Poland and France, where they helped to fight against the Nazi "blitzkrieg" in the first period of the war, and later in Britain where they formed fighter and bomber squadrons within the Royal Air Force,[1] which were a constituent of the Czechoslovak army in exile on the British Isles. Czech fighter ace Josef František became arguably the best top scoring allied fighter pilot of the Battle of Britain. Other Czech and Slovak pilots continued to fight against the Germans in the Soviet Union. 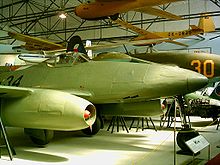 Under German rule all Czechoslovak aircraft where absorbed into the Luftwaffe – and the huge Czechoslovak manufacturing base was converted to produce German aircraft and engines.

After the end of the war in late 1945 four Czech RAF squadrons, Numbers 310, 311, 312, and 313 were all despatched to Czechoslovakia and became part of the Czech armed forces.

After the division of Czechoslovakia by Nazi Germany in 1939, Slovakia was left with a small air force composed primarily of Czechoslovakian combat aircraft. This force defended Slovakia against Hungary in 1939, and took part in the invasion of Poland in support of Germany. During the Second World War, the Slovak Air force was charged with the defence of Slovak airspace, and, after the invasion of Russia, provided air cover for Slovak forces fighting against the Soviet Union on the Eastern Front.[2] While engaged on the Eastern Front, Slovakia’s obsolete biplanes were replaced with German combat aircraft, including the Messerschmitt Bf 109. The air force was sent back to Slovakia after combat fatigue and desertion had reduced the pilots' effectiveness. Slovak air units took part in the Slovak National Uprising against Germany from late August 1944.

During this time Czechoslovakia was member of the Eastern Bloc, allied with the Soviet Union, and from 1955 a member of the Warsaw Pact. Because of this, the Czechoslovak Air Force used Soviet aircraft, doctrines and tactics. The types of aircraft were mostly MiGs. Fighters MiG-15, MiG-19 and MiG-21F was produced in licence; in 1970s, MiG-23MF were bought, accompanied by −23MLs and MiG-29s in 1980s.

In May 1987, two Czech Air Force jets were scrambled to try to bring down a Czechoslovak engineer attempting to escape his home country via a home-built ultralight aircraft. After flying about 10 miles to the West German border, the refugee's aircraft ran out of fuel, and he landed safely in a Bavarian forest, just before the Czech fighters could intercept him.[3]

In November 1989 the communist leaders and guidelines fell across Czechoslovakia. The two parliaments of the two new states the Czech republic and Slovakia, dissolved their union on 1 January 1993. The assets of the former air force were divided 2:1 in the Czech favour, and thus the Slovak Air Force was (re)formed. The 18 MiG 29s were shared equally between the two countries.