Cystopteris tenuis is sometimes known as Mackay's bladder fern or Mackay's fragile fern. It was long considered to be a part of the superspecies for fragile ferns, as Cystopteris fragilis (L.) Bernh. var. mackayi Lawson. 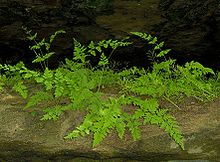 This species is an allotetraploid of hybrid origin (see Cystopteris hybrid complex. The parent diploid species are Cystopteris protrusa and the hypothesized Cystopteris hemifragilis, believed to be an extinct species.

Mackay's fragile fern grows on rock or in scree, generally in sheltered spots, in the northeastern United States.