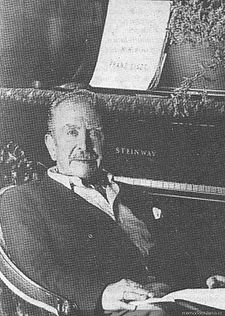 Claudio Arrau León (February 6, 1903 – June 9, 1991) was a Chilean pianist known for his interpretations of a vast repertoire spanning from the baroque to 20th-century composers, especially Beethoven, Schubert, Chopin, Schumann, Liszt, Brahms and Debussy. He is widely considered one of the greatest pianists of the twentieth century.

Arrau was born in Chillán, Chile, the son of Carlos Arrau, an ophthalmologist who died when Claudio was only a year old, and Lucrecia León Bravo de Villalba, a piano teacher. He belonged to an old, prominent family of Southern Chile. His ancestor Lorenzo de Arrau, a Spanish engineer, was sent to Chile by King Carlos III of Spain. Through his great-grandmother, María del Carmen Daroch del Solar, Arrau was a descendant of the Campbells of Glenorchy, a Scottish noble family.[citation needed]

Arrau was a child prodigy, giving his first concert at age five. When he was 6 he auditioned in front of several congressmen and President Pedro Montt, who became so impressed as to start arrangements for his future education. At age 8 he was sent on a 10-year long grant from the Chilean government to study in Germany, travelling in the company of his mother and sister Lucrecia. He was admitted at the Stern Conservatory of Berlin where he eventually became a pupil of Martin Krause, who had studied under Franz Liszt. At the age of 11 he could play Liszt's Transcendental Etudes, considered to be one of the most difficult sets of works ever written for the piano, and also Brahms's Paganini Variations. Arrau's first recordings were made on Aeolian Duo-Art player piano music rolls. Krause died after 5 years of teaching Arrau, who at 15 was desolate at the loss of his mentor.

In 1937, Arrau married the mezzo-soprano Ruth Schneider, a German national, and they had three children: Carmen (1938–2006), Mario (1940–1988) and Christopher (1959). In 1941 the Arrau family left Germany and migrated to the United States, where they spent their remaining years. He settled in New York City and adopted dual U.S./Chilean citizenship later on, in 1979.

Arrau was born and raised as a Roman Catholic. By his own admission, he was especially devout in his teenage years, having been encouraged by a French Catholic priest that he liked. He later became an agnostic, having become disgusted with the idea of transubstantiation, which he compared to cannibalism.[citation needed]

Tone and approach to music

Many claim that his rich, weighty tone lent his interpretations an authoritative, distinctive voice, some saying it sounded thick and muddy and others praising its rounded tone, saying it sounded as though Arrau were almost playing the organ or "plowing" his "paws" into the "flexible" keyboard. According to American critic Harold C. Schonberg, Arrau always put "a decidedly romantic piano tone in his interpretations".[1]

Arrau was an intellectual and a deeply reflective interpreter. He read widely while travelling, and despite the lack of any formal education outside of his musical training, he learned English, Italian, German, and French in addition to his native Spanish. He became familiar with Jung's psychology in his twenties.[2]

Arrau's attitude toward music was very serious. He preached fidelity to the score. Although he often played with slower and more deliberate tempi from his middle age, Arrau had a reputation for being a fabulous virtuoso early in his career. According to Joseph Horowitz in his book Conversations With Arrau (1982), many critics felt that his overall approach became less spontaneous and more reserved and introspective after the death of his mother, whom he was extremely close to. Arrau had isolated himself for two weeks after his mother's death, refusing to perform or to receive comfort from friends.

Arrau recorded the comprehensive piano music of Schumann. He edited Beethoven's piano sonatas for the Peters Urtext edition and recorded all of them on the Philips label in 1962-1966. He recorded almost all of them once again after 1984. He is also famous for his recordings of Schubert, Chopin, Liszt, Brahms and Debussy, among others.

At the time of his death at age 88 in Mürzzuschlag, Austria in the midst of a European concert tour, Arrau was working on a recording of the complete works of Bach for keyboard, and had Haydn, Mendelssohn, Reger, Busoni and Boulez's 3rd Sonata in preparation. His remains were interred in his native city of Chillán, Chile.

The Robert Schumann Society established the Arrau Medal in 1991. It has been awarded to András Schiff, Martha Argerich and Murray Perahia.

An interpreter must give his blood to the work interpreted. — Claudio Arrau

Since in music we deal with notes, not words, with chords, with transitions, with color and expression, the musical meaning always based on those notes as written and nothing else - has to be divined. Therefore any musician, no matter how great an instrumentalist, who is not also an interpreter of a divinatory order, the way Furtwängler was, or Fischer-Dieskau is, is somehow one-sided, somehow without spiritual grandeur. — Claudio Arrau