Cyrus the Great in the Bible

Cyrus the Great in the Bible 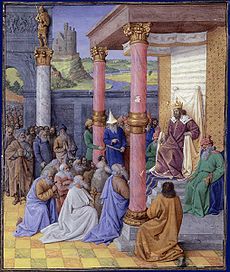 The Cylinder confirms that Cyrus allowed captives in Babylon to return to their native lands, earning him an honored place in Judaism.

Cyrus the Great figures in the Hebrew Bible (Old Testament) as the patron and deliverer of the Jews. He is mentioned twenty-three times by name and alluded to several times more. [1] From these statements it appears that Cyrus the Great, king of Persia, was the monarch under whom the captivity of the Jews ended, for in the first year of his reign he was prompted by God to make a decree that the Temple in Jerusalem should be rebuilt and that such Jews as cared to might return to their land for this purpose. Moreover, he showed his interest in the project by sending back with them the sacred vessels which had been taken from the First Temple and a considerable sum of money with which to buy building materials.

Cyrus in Babylon and the Jewish connection

The personage of Cyrus the Great is unconditionally praised in the Jewish sources. It is likely that, after the Persian conquest of Babylon, Cyrus had commenced his relationship with the Jewish leaders in exile,[2] and that he later was considered as a messiah sent by God.[3] Daniel was in the favor of Cyrus, and it was in the third year of Cyrus that he had the vision recorded in his tenth chapter.

Cyrus issued the decree of liberation to the Jews,[4] concerning which Daniel had prayed and prophesied.[5] The edict of Cyrus for the rebuilding of the Temple in Jerusalem marked a great epoch in the history of the Jewish people. However, some of the non-Jewish peoples of Samaria hired counselors to frustrate the Jews from completing the rebuilding throughout the reign of Cyrus, Xerxes ('Ahasuerus'), and Artaxerxes, until the reign of Darius. The work recommenced under the exhortations of the prophets, and when the authorities asked the Jews what right they had to build a temple, they referred to the decree of Cyrus. Darius, who was then reigning, caused a search for this alleged decree to be made, and it was found in the archives at Ecbatana,[6] whereupon Darius reaffirmed the decree and the work proceeded to its triumphant close.

A chronicle drawn up just after the conquest of Babylonia by Cyrus, gives the history of the reign of Nabonidus ('Nabuna'id'), the last king of Babylon, and of the fall of the Babylonian empire. In 538 BC there was a revolt in Southern Babylonia, while the army of Cyrus entered the country from the north. In June the Babylonian army was completely defeated at Opis, and immediately afterwards Sippara opened its gates to the conqueror. Gobryas (Ugbaru), the governor of Media, was then sent to Babylon, which surrendered "without fighting," and the daily services in the temples continued without a break. In October, Cyrus himself arrived, and proclaimed a general amnesty, which was communicated by Gobryas to "all the province of Babylon," of which he had been made governor. Meanwhile, Nabonidus, who had concealed himself, was captured, but treated honourably; and when his wife died, Cambyses II, the son of Cyrus, conducted the funeral. Cyrus now assumed the title of "king of Babylon," claimed to be the descendant of the ancient kings, and made rich offerings to the temples. At the same time he allowed the foreign populations who had been deported to Babylonia to return to their old homes, carrying with them the images of their gods. Among these populations were the Jews, who, as they had no images, took with them the sacred vessels of the temple.

Speculation abounds to the reasoning for Cyrus' release of the Jews from Babylon. One argument being that Cyrus was a follower of Zoroaster, the monotheistic prophet: Zoroastrianism played a dominant religious role in Persia throughout its history until the Islamic conquest. As such, he would feel a kindred spirit with the monotheistic Jews. Another possibility is the magnanimous respect he is ascribed to have shown to the diverse beliefs and customs of the peoples within his extended kingdom. As one example, upon the conquest of Babylon itself, it's recorded that he paid homage at the temple of the Babylonian god Marduk - thereby gaining the support of the Babylonian people and minimizing further bloodshed. While Jewish tradition, as described previously in Ezra1:1-8, indicates "the Lord inspired King Cyrus of Persia to issue this proclamation", in the Cyrus Cylinder he pays homage to Marduk. This Babylonian document has been interpreted as referring to the return to their homelands of several displaced cultural groups, one of which could have been the Jews:

From [Babylon] to Aššur and (from) Susa, Agade, Ešnunna, Zamban, Me-Turnu, Der, as far as the region of Gutium, the sacred centers on the other side of the Tigris, whose sanctuaries had been abandoned for a long time, I returned the images of the gods, who had resided there [i.e., in Babylon], to their places and I let them dwell in eternal abodes. I gathered all their inhabitants and returned to them their dwellings. In addition, at the command of Marduk, the great lord, I settled in their habitations, in pleasing abodes, the gods of Sumer and Akkad, whom Nabonidus, to the anger of the lord of the gods, had brought into Babylon. (lines 30-33)[7]

However, it has been argued that it must be referring to people associated to the image's cult instead of deportees.[8] Diana Edelman has pointed at the serious chronological difficulties that arise when we accept that the Jews returned during the reign of Cyrus.[9]

The terms used by the author of Deutero-Isaiah are reminiscent of certain passages in the Cyrus Cylinder:[2] Traditionally, these passages in Isaiah were believed to predate the rule of Cyrus by about 100 years, however, most modern scholars date Isaiah 40-55(often referred to as Deutero-Isaiah), toward the end of the Babylonian exile(ca. 536 BCE).[10] Whereas Isaiah 1-39 (referred to as Proto-Isaiah) saw the destruction of Israel as imminent, and the restoration in the future, Deutero-Isaiah speaks of the destruction in the past (Isa 42:24-25), and the restoration as imminent (Isa 42:1-9). Notice, for example, the change in temporal perspective from (Isa 39:6-7), where the Babylonian Captivity is cast far in the future, to (Isa 43:14), where the Israelites are spoken of as already in Babylon.[11] According to scholar R. N. Whybray, the author of Deutero-Isaiah(chapters 40-55) was mistaken for he thought that Cyrus would destroy Babylon but he did not. Cyrus made it more splendor than ever. But he did allow the Jewish exiles to return home, though not in the triumphant manner which Deutero-Isaiah expected.[12]

Who roused from the east him that victory hails at every step? Who presents him with nations, subdues kings to him? His sword makes dust of them and his bow scatters them like straw. He pursues them and advances unhindered, his feet scarcely touching the road. Who is the author of this deed if not he who calls the generations from the beginning? I, the Lord, who am the first and shall be with the last. (Isaiah 41:2-4)

Then the alliance between Cyrus and God is made explicit:

Thus says the Lord to his anointed, to Cyrus, whom he has taken by his right hand to subdue nations before him and strip the loins of kings, to force gateways before him that their gates be closed no more: I will go before you levelling the heights. I will shatter the bronze gateways, smash the iron bars. I will give you the hidden treasures, the secret hoards, that you may know that I am the Lord. (Isaiah 45:1-3)

Among the classical Jewish sources, besides the Bible, Josephus (1st century A.D.) mentions that Cyrus freed the Jews from captivity and helped rebuild the temple. He also wrote to the rulers and governors that they should contribute to the rebuilding of the temple and assisted them in rebuilding the temple. A letter from Cyrus to the Jews is described by Josephus.[13]: