Kirill I of Moscow

Kirill I of Moscow

Kirill, or Cyril (Russian: Кирилл, secular name Vladimir Mikhailovich Gundyayev (Russian: Владимир Михайлович Гундяев; born 20 November 1946) is a Russian Orthodox bishop who has been Patriarch of Moscow and all Rus' and Primate of the Russian Orthodox Church since 1 February 2009.

Prior to becoming Patriarch, Kirill was Archbishop (later Metropolitan) of Smolensk and Kaliningrad beginning on 26 December 1984; and also Chairman of the Orthodox Church's Department for External Church Relations and a permanent member of the Holy Synod beginning in November 1989.

Kirill was born in Leningrad; his father Mikhail and grandfather Vasiliy were Russian Orthodox priests. As a young man he was active in the Komsomol (League of Communist Youth) and was a talented basketball player. In 1969, he took monastic vows on April 3 and was ordained Hierodeacon on April 7 and Hieromonk on June 1. In 1970, Kirill I completed a degree from the Leningrad Theological Academy where he was retained as a professor of dogmatic theology and aide to the Academy’s Inspector. He was made a personal secretary to Nikodim (Rotov), Metropolitan of Leningrad on August 30, 1970.

On 12 September 1971, Kirill became an archimandrite and was posted as a representative of the Russian Orthodox Church to the World Council of Churches (WCC) in Geneva. On 26 December 1974, he was appointed rector of the Leningrad Academy and Seminary. Since December 1975, he has been a member of the WCC Central Committee and Executive Committee. 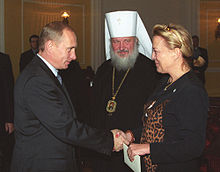 From 1974 to 1984 he was the rector of the Leningrad Spiritual Academy and Seminary.

In 1971 he was appointed representative of the Moscow Patriarchate at the World Council of Churches and has been actively involved in the ecumenical activity of the Russian Orthodox Church since then.

In 1978, Kirill was appointed deputy chairman and, in November 1989, he was appointed chairman of the External Church Relations Department of the Moscow Patriarchate and permanent member of the Holy Synod.

He was criticised by some for the ROC's failures in the Diocese of Sourozh and Ukraine.[1][2][3]

On 27 January 2006, Kirill was given the Order of St. Alexander Nevsky by Grand Duchess Maria Vladimirovna of Russia.

On 6 December 2008, the day after the death of Patriarch Alexy II, the Holy Synod elected him locum tenens of the Patriarchal throne. On 9 December, during the funeral service for Alexy II in Christ the Saviour Cathedral (which was broadcast live by Russia’s state TV channels), he was seen and reported to have fainted at one point.[4][5] On December 29, when talking to journalists, he said he was opposed to any reforms of a liturgical or doctrinal nature in the Church.[6]

Kirill was elected Patriarch on January 27, 2009, at the ROC Local Council, and enthroned during a liturgy at the Cathedral of Christ the Saviour, Moscow on February 1, 2009. The service was attended, among others, by President of Russia Dmitry Medvedev and Prime Minister Vladimir Putin.[7]

The following day, Russia President Dmitry Medvedev hosted a reception (a formal banquet[8][9]) for the ROC bishops in the Grand Kremlin Palace, whereat Patriarch Kirill held forth about the Byzantine concept of symphonia as his vision of the ideal of church-state relations, though acknowledging that it was not possible to fully attain to it in Russia today.[10][11][12]

Kirill being presented with the patriarchal koukoulion during his enthronement.

The conservative wing in the Russian Orthodox Church criticized Kirill of practicing ecumenism throughout the 1990s. In 2008, breakaway Bishop Diomid of Anadyr and Chukotka criticized him for associating himself with the Catholic Church.[13] However, in a recent statement, Kirill stated that there could be no doctrinal compromise with the Catholic Church, and that discussions with them did not have the goal of seeking unification.[14]

On October 20, 2008, while on a tour of Latin America, he had a meeting with First Secretary of the Communist Party of Cuba Fidel Castro. Castro commended Metropolitan Kirill as his ally in combating "American imperialism".[15][16][17] Kirill awarded Fidel Castro and his brother Raúl Castro on behalf of Patriarch Alexy II in recognition of their decision to build the first Russian Orthodox Church in Havana, to serve the Russian expatriates living there.[18]

Since 1994 Kirill has hosted a weekly Orthodox television program "Слово пастыря" on ORT/Channel One.

Links with the KGB 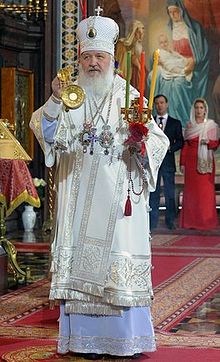 In the early 1990s and later on, Kirill was accused of having links to the KGB during much of the Soviet period, as were many members of the Russian Orthodox Church hierarchy, and of pursuing the state’s interests before those of the Church.[19][20][21][22][23][24] His alleged KGB agent’s codename was "Mikhailov".[25]

Journalists of the newspapers Kommersant and Moskovskij Komsomolets accused Kirill of profiteering and abuse of the privilege of duty-free importation of cigarettes granted to the Church in the mid-1990s and dubbed him "Tobacco Metropolitan".[26] The Department for External Church Relations was alleged to have acted as the largest supplier of foreign cigarettes in Russia.[27] Kirill’s personal wealth was estimated to be $1.5 billion by sociologist Nikolai Mitrokhin in 2004, and at $4 billion by The Moscow News in 2006.[24][28] However, Nathaniel Davis noted that "...There is no evidence that Metropolitan Kirill has actually embezzled funds. What is more likely is that profits from the importation of tobacco and cigarettes have been used for urgent, pressing Church expenses."[27] The duty-free importation of cigarettes ended in 1997.[27] In his 2002 interview with Izvestia, Metropolitan Kirill called the allegations about his profiteering a political campaign against him.[29]

Kirill "heartily congratulated" [30]Alexander Lukashenko for winning the Belarusian presidency in 2010 [31] by an apparent 80% majority, in elections marred by violence[32] and accusations of intimidation and vote rigging.[33]