The Cyranides (also Kyranides or Kiranides) is a compilation of Hermetic magico-medical works in Greek first put together in the 4th century.[1] A Latin translation also exists. It has been described as a "farrago" and a texte vivant,[2] owing to the complexities of its transmission: it has been abridged, rearranged, and supplemented. The resulting compilation covers the magical properties and practical uses of gemstones, plants, and animals, and is a virtual encyclopedia of amulets;[3] it also contains material pertinent to the history of western alchemy,[4] and to New Testament studies, particularly in illuminating meanings of words and magico-religious practices.[5] As a medical text, the Cyranides was held in relatively low esteem even in antiquity and the Middle Ages because of its use of vernacular language and reliance on lore rather than Hippocratic or Galenic medical theory.[6]

In the Pseudodoxia Epidemica, Thomas Browne described the Cyranides as "a collection out of Harpocration the Greek and sundry Arabick writers delivering not only the Naturall but Magicall propriety of things."[7] Although the Cyranides was considered "dangerous and disreputable" in the Middle Ages, it was translated into Latin by Pascalis Romanus, a clergyman with medical expertise who was the Latin interpreter for Emperor Manuel I Komnenos. The 14th-century cleric Demetrios Chloros was put on trial because he transcribed magical texts, including what was referred to as the Coeranis.[8]

The original 4th-century Cyranides comprised three books, to which a redactor added a fourth. The original first book of the Cyranides, the Κυρανίς (Kuranis), was the second component of a two-part work, the first part of which was the Ἀρχαϊκἠ (Archaikê). Books 2–4 are a bestiary. The edition of Kaimakis (see below) contains a fifth and sixth book which were not transmitted under the name Cyranides but which were included with the work in a limited number of manuscripts. A medieval Arabic translation of the first book exists, and portions of it are "reflected" in the Old French work Le livre des secrez de nature (The Book of Nature's Secrets).

The Cyranides begins by instructing the reader to keep its contents secret, and with a fictional narrative of how the work was discovered.[9] In one 15th-century manuscript, the author of the work is said to be Kyranos (Κοίρανος), king of Persia.[10]

The Cyranides devotes a chapter to the healing powers of the water snake; its bezoar is used to cure dropsy.[11] Fish gall is recommended for healing white spots in the eye; fish liver is supposed to cure blindness.[12] For a "large and pleasurable" erection, a mixture of arugula, spices, and honey is recommended, as is carrying the tail of a lizard or the right molar of a skink.[13] The fumigation or wearing of bear hair turns away evil spirits and fever.[14]

Daniel Ogden, a specialist in magic and the supernatural in antiquity, has gathered several references from the Cyranides on the use of gemstones and amulets.[15] The collection offers spells to avert the child-harming demon Gello, who was blamed for miscarriages and infant mortality, and says that aetite can be worn as an amulet against miscarriage.[16]

Olympidorus provides a summary of a passage from the work, not part of the abridged version now extant, that has cosmological as well as alchemical implications: 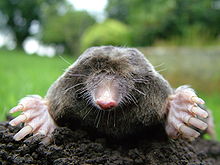 The mole: once a man, and cursed for revealing the secrets of the sun, according to the Cyranides

In the extant version, the Cyranides contains a description of the heliodromus, a phoenix-like bird from India which, upon hatching, flies to the rising sun and then goes west when the sun passes the zenith. It lives only a year, and leaves behind a single androgynous progeny.[19]