The Cyprus Port & Marine Police (Greek Λιμενική και Ναυτική Αστυνομία) are the civilian Coast Guard wing of the Cyprus Police, and are tasked with the primary mission of law enforcement of the waters around, and control of the sea borders of the Republic of Cyprus. Main roles are reported to include law enforcement of illicit activities such as smuggling, terrorism, piracy and illegal fishing. The Cyprus Port and Marine Police also serve a role as a search and rescue (SAR) force. This force is equipped with patrol boats and radars.

Cyprus Marine Police boats are notable by the "PV-" (Patrol Vessel) and "PL-" (Patrol Launch) prefixes on their pennant numbers, painted on the side of the hull.

In 1956 a special committee, set up by the then British Colonial Government for the re-organisation of Cyprus Police, included in its report a proposal for the establishment of a Port and Marine Police in Cyprus. The new Service was set up the following year equipped with seven boats. It operated as an independent Police Division with its headquarters at Famagusta and 2 permanent stations in Limassol and Larnaca. It also had a sub-station in Kyrenia which operated during the summer. In 1960, with the establishment of the independent Republic of Cyprus, the Port and Marine Police became a branch of the Police and the Gendarmerie.

The Turkish invasion of 1974 was a great blow for the Port and Marine Police as its installations at Famagusta Port were destroyed and five out of its seven boats were seized by the Turkish Army. After this great loss it continued to operate but only with two boats at its stations in Larnaca and Limassol. Its headquarters were transferred from Famagusta to the old port of Limassol.

In 1992, five SAB-12 launches were transferred from Germany to Cyprus, without armament.[3]

Headquartered in Limassol the Port and Marine Police is administered by its Commander and Assistant Commanders.

The Commander has both administrative and operational responsibility and is accountable to the Chief of Police through the Assistant Chief of Support.

The Port and Marine Police is made up of the following stations: 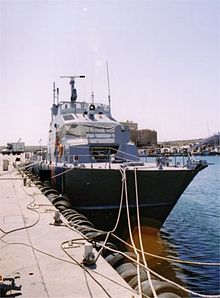