The Real World: Miami is the fifth season of MTV's reality television series The Real World, which focuses on a group of diverse strangers living together for several months in a different city each season, as cameras follow and document their lives and interpersonal relationships. The season was filmed in Miami Beach, Florida, and first aired in 1996.

The Real World: Miami was the first season filmed in the United States outside of New York and California, and the first of two seasons to be filmed in South Florida, the second of which was The Real World: Key West, which followed in 2006.

SallyAnn Salsano, a finalist for this season's cast, went on to become a successful producer and director, best known as the creator the MTV reality television program Jersey Shore.[2]

This was the first season in which the housemates were given a season-long assignment or task, an aspect of the series that would continue in almost all subsequent seasons (the Brooklyn season dispensed with it). This season the cast was given $50,000 startup money to begin a business of their choosing. The cast's efforts were marked by much disorganization and conflict, and while ideas such as a dessert delivery service and a fashion line were floated about, they were ultimately not able to start the business. 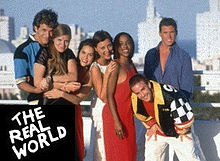 When Sarah and her friends join Melissa and Flora for dinner at a restaurant, Melissa questions if Sarah's friends could be able to afford dinner there, offending Sarah, who points out that her friends all have jobs, while Melissa does not. Sarah's friends, make a statement to Melissa by paying for the entire dinner and an embarrassed Melissa thanks them for the gesture. She later gets into a fight with Dan after she opens his mail, during which they exchange heated epithets. The next day they talk, and Melissa tearfully admits that her anger comes from a verbally abusive father, and she hated seeing her father in herself. They both apologize for their actions and come to an accord.[13]

Episode 20. "Everyone Gets the Jackson"

Sarah is visited at the house by her friends from Kenosha, Wisconsin, one of whom, Hank, makes a home movie about life in the house. While filming, Flora repeatedly flashes the camera. When the movie is produced, Flora says she does not want the movie distributed to anyone. She claims she was on heavy medication and tries to convince Sarah's friend to sign a contract that the movie won't be released.[16]

In 1998, Joe Patane published his memoirs about his experiences on the show, Livin' in Joe's World: Unauthorized, Uncut, and Unreal: The Memoirs of Joe Patane from the Miami Cast of MTV's The Real World.[17]

During the The Real World Reunion 2000, the first reunion show that involved the Miami cast, Flora revealed that she and Mitchell got married. Joe revealed that he and Nicole broke up, to which Mike expressed relief, because, as he told Joe, Nicole was a "bitch".[25]

Cynthia Roberts appeared in "Floating Deck", a 2008 episode of the DIY Network show Yard Crashers, which depicted the renovation of her back yard.[26]

After enjoying a career in runway and print fashion modeling, Dan Renzi became a model scout for a Chicago agency, a field researcher with the Los Angeles Department of Epidemiology and director of AIDS/HIV program at the Kansas City Gay and Lesbian Center. He has made appearances at celebrity Spring Break parties in the Bahamas.[27]

^* The contestant was a finalist on the Challenge, but lost in the Final Race.