The historic range of the black-tailed prairie dog was from southern Saskatchewan to Chihuahua, Mexico,[2] and included portions of Montana, North Dakota, South Dakota, Wyoming, Colorado, Nebraska, Kansas, Oklahoma, Texas, Arizona, and New Mexico.[3] As of 2007, black-tailed prairie dogs occur across most of their historic range, excluding Arizona;[4][5] however, occupied acreage and populations are well below historic levels.[6] 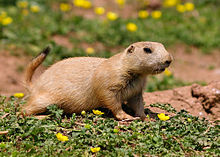 Black-tailed prairie dogs inhabit grasslands including short- and mixed-grass prairie, sagebrush steppe, and desert grasslands. Shortgrass prairies dominated by buffalo grass (Buchloe dactyloides), blue grama (Bouteloua gracilis), and western wheatgrass (Pascopyron smithii),[9][18][19][21] and mixed-grass prairies [5][9][10][11][12][13] that have been grazed by native and nonnative herbivores are preferred habitat.[14][19] Slopes of 2% to 5% and vegetation heights between 3 and 5 inches (7–13 cm) are optimal for detecting predators and facilitating communication.[9][18][19] 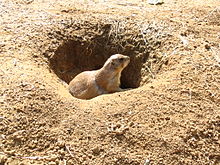 At the Smithsonian National Zoological Park, US

The home range and territorial boundaries of black-tailed prairie dogs are determined by the area occupied by an individual coterie. Coteries typically occupy about 1.0 acre (0.4 ha).[19]

Population density and growth are influenced by habitat quality [18] and are restricted by topographic barriers, soil structure, tall vegetation, and social conditions.[18][19] Urbanization and other types of human development may restrict colony size and spatial distribution. Most plains habitats support at least 13 black-tailed prairie dogs/ha.[19]

There are three types of burrow entrances- dome mounds, rimmed crater mounds, and entrances without structures around them. Entrance features may prevent flooding and/or aid in ventilation.[4][18][19] Dome mounds consist of loosely packed subterranean soil spread widely around the entrance of the burrow and tend to be vegetated by prostrate forbs. Rimmed crater mounds are cone-shaped mounds constructed of humus, litter, uprooted vegetation, and mineral soil. Black-tailed prairie dogs compact the soil of these mounds with their noses, creating poor sites for seedling establishment.[11] Rimmed crater mounds may be used as wallowing sites for American bison. Burrow entrances without structures around them are usually located on slopes >10°.[18] The density of black-tailed prairie dog burrow openings depends on both substrate and duration of occupation of an area.[19]

Minimum breeding age for the black-tailed prairie dog is usually 2 years,[4][18][19] but yearlings may breed if space and food are abundant.[18][19] In Wind Cave National Park, South Dakota, 40% (213 individuals) of yearling females copulated and 9% successfully weaned a litter.[27]

The mating season occurs from late February through April, but varies with latitude and site location of a black-tailed prairie dog colony.[18][19] Estrus occurs for only 1 day during the breeding season.[27]

In Wind Cave National Park, the mean percentage of adult females that weaned a litter each year was 47% ± 14%.[28] Reproductive success and survival may be greater in young black-tailed prairie dog colonies that have space for expansion. In a young colony (5 years) with space for expansion in Wind Cave National Park, 88% females were pregnant and 81% of young weaned, compared to an old colony (30 years) with no room for expansion, where 90% of females were pregnant and 41% of young were weaned.[12] 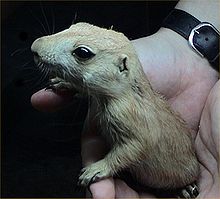 In captivity, black-tailed prairie dog pups open their eyes at 30 days old.[18] Pups are altricial and remain below ground for up to 7 weeks to nurse.[18][19][27] Maturity is complete at 15 months old.[18] Lifespan of the black-tailed prairie dog in the wild is unknown, but males >3 years old experience high mortality. Females may live longer than males.[18] According to Hoogland and others,[28] lifespan is about 5 years for males and 7 years for females.

Black-tailed prairie dogs live in colonies. Colony size may range from 5 to thousands of individuals. Colonies are subdivided into 2 or more wards, based on topographic features, such as hills. Wards are usually subdivided into 2 or more coteries, which are composed of aggregates of highly territorial, harem-polygynous social groups.[18][19] Individuals within coteries are amicable with each other and hostile towards non-coterie individuals. At the beginning of the breeding season, a coterie is typically composed of 1 adult male, 3 to 4 adult females, and several yearlings and juveniles of both sexes. After the breeding season and prior to dispersal of juveniles, coterie size increases.[18]

Reasons for dispersal include new vegetative growth at colony peripheries, shortage of unrelated females in a coterie, harassment of females by juveniles, and probably an innate genetic mechanism responding to increased density within a colony. Males typically leave the natal territory 12 to 14 months after weaning, during May and June,[28] but dispersal may occur throughout the year. Females generally remain in their natal coterie territories for their lifetime. Intercolony dispersers moved an average distance of 1.5 miles (2.4 km) from their natal site.[28] Roads and trails may facilitate black-tailed prairie dog dispersal.[19]

Major mortality factors include predation (see Predators), disease, infanticide, habitat loss, poisoning, trapping, and shooting.[4][7][27][28] Survivorship for the first year was 54% for females and <50% for males in Wind Cave National Park. Primary causes of death were predation and infanticide.[27] Infanticide partially or totally eliminated 39% (361 individuals) of all litters. Lactating females were the most common killers.[27] Mortality of young was highest due to heavy predation during the winter and early spring following birth.[18] Mortality increases with dispersal from a colony or coterie.[19] 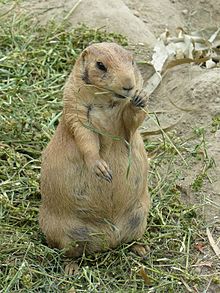 Black-tailed prairie dogs are selective opportunists, preferring certain phenological stages or types of vegetation according to their needs.[9][18][30] When forage is stressed by grazing, drought, or herbicides, black-tailed prairie dogs change their diet quickly. Grasses are preferred over forbs.[19][21] Diet may consist of ≥75% grasses, especially during summer.[21][30] Western wheatgrass, buffalo grass, blue grama [18][19][30] and sedges (Carex spp.) are preferred during spring and summer. Scarlet globemallow (Sphaeralcea coccinea) [10][18][21][30] and Russian-thistle (Salsola kali) [31] are preferred during late summer and fall, but are sought out during every season.[10][19][21] During winter, plains prickly pear (Opuntia polyacantha), Russian thistle, and underground roots are preferred.[18][30] Shrubs such as rabbitbrush (Chrysothamnus spp.), winterfat (Krascheninnikovia lanata), saltbush (Atriplex spp.), and sagebrush (Artemisia spp.) are also commonly eaten.[31] Water, which is generally not available on the short-grass prairie, is obtained from vegetation such as plains prickly pear.[30] Koford [19] estimated that 1 black-tailed prairie dog eats approximately 7 lbs (3 kg) of herbage per month during summer.[31] Cutworms,[31] grasshoppers,[19] and old or fresh American bison scat are occasionally eaten.[4] For a detailed list of foods eaten by black-tailed prairie dogs by month, and ratings of those foods' forage value to cattle and sheep, see.[31] For a complete list of vegetation preferred by the black-tailed prairie dog, see.[32] 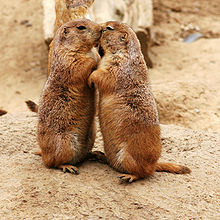 Black-tailed prairie dogs were the most common prairie dog species collected in the wild for sale as exotic pets, until this trade was banned in 2003 by the United States federal government. Prairie dogs in captivity at the time of the ban are allowed to be possessed under a grandfather clause, but no more may be caught, traded, or sold, and transport is only permitted to and from a veterinarian under proper quarantine procedures. The ban was officially lifted on September 8, 2008.[36] 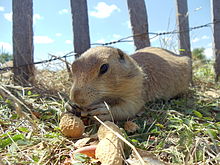