Severe Tropical Cyclone Xavier (RSMC Nadi Designation: 01F, JTWC Designation: 01P) was a strong pre-season cyclone, that formed on October 20 to the north of the Santa Cruz Islands. During the next day it rapidly developed and was designated as Tropical Depression 01F later that day, before being designated as Tropical Cyclone Xavier while over Santa Cruz early on October 22. Later on October 22, Xavier intensified into a category 3 severe tropical cyclone on the Australian Tropical Cyclone Intensity Scale, before passing over Tikopia early the next day. Xavier then reached its peak wind speeds of 175 km/h (110 mph 10-min), which made it a Category 4 cyclone early on October 24. Xavier stayed at its peak wind speeds until early the next day when it started to rapidly weaken, becoming a depression early on October 26. The remnants of Xavier persisted until October 28 before dissipating. There were no casualties reported as a result of the storm and little impact reported in the Solomon Islands and Vanuatu.

On October 20, 2006, both the Regional Specialized Meteorological Center in Nadi, Fiji (RSMC Nadi) and the Joint Typhoon Warning Center (JTWC) reported that a tropical disturbance had formed to the north of the Santa Cruz Islands.[1][2] The disturbance at this time contained a developing low level circulation center with convective banding over the eastern side of the disturbance.[2] The centre of the disturbance was located within an active South Pacific Convergence Zone which had a favorable environment for the disturbance to develop with good outflow and low vertical wind shear.[2][3]

During the next day the disturbance gradually developed with it being designated as Tropical Depression 01F by RSMC Nadi at 2100 UTC, with a Tropical Cyclone Formation Alert issued an hour later by the JTWC as the low level circulation center had become well defined with flaring convection wrapping into the center.[4][5] At 0000 UTC on October 22, RSMC Nadi declared that Tropical Depression 01F had intensified into Tropical Cyclone Xavier and was a Category 1 tropical cyclone on the Australian tropical cyclone intensity scale while it was located over Santa Cruz.[4][6] However it was discovered during post-season analysis that Xavier a Category 1 cyclone six hours earlier than operationally reported.[3] Later that morning the JTWC initiated warnings on Xavier designating it as Cyclone 01P.[5]

During October 22, Xavier moved slowly over Santa Cruz and became more organized with an eye developing before later that day being upgraded to a Category 3 severe tropical cyclone as a clear eye feature had developed in a tightly-wrapped central core.[7] During the next day Xavier passed over Tikopia as a severe tropical cyclone.[8] After passing through Tikopia it was predicted that Xavier would start moving towards the west or southwest, which would have taken it through the main islands of Vanuatu.[9] Early on October 24 it was reported by both RSMC Nadi and the JTWC that Cyclone Xavier had reached its peak intensity with wind speeds of 175 km/h (110 mph 10-min) and 215 km/h (130 mph 1-min) respectively, classifying it a Category 4 cyclone on both the Australian tropical cyclone intensity scale and the Saffir Simpson Hurricane Scale.[5][10][11]

The cyclone remained at its peak intensity throughout much of October 24, though by 1800 UTC, Xavier had started to show signs of rapid weakening.[10] As a result, Xavier was downgraded to a Category 2 tropical cyclone early the next morning.[12] Xavier then rapidly weakened further to Category 1 tropical cyclone status in response to increasing vertical wind shear. Early on October 26 the cyclone was downgraded to a tropical depression, and had attained characteristics of an extratropical cyclone.[12][13][14] Later that morning both the JTWC and RSMC Nadi issued their final advisories on the depression as the low level circulation center became separated from the area of convection.[5][9][13] A high pressure system caused the storm's remnants back to the northwest at a rapid pace, and they fully dissipated on October 28.[9] 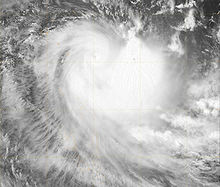 Early on October 22, both RSMC Nadi and TCWC Brisbane started to issue special advisories to support the meteorological services of Vanuatu and the Solomon Islands in tracking the cyclone. As Xavier was over the islands of Santa Cruz the whole of Temotu Province was placed under a tropical cyclone gale warning, while cyclone watches were declared for Rennel, Bellona, and Vanuatu.[17] During the next 24 hours, the Torres and Banks Islands, as well as Espirito Santo, Maewo, Ambae, were placed under a cyclone warning.[18] The warnings for the Solomon Islands were then cancelled early the next day, while the warnings for Vanuatu were maintained until late on October 25, when RSMC Nadi discontinued them.[19][20]

There were no casualties as a result of Xavier.[3] In the Solomon Islands, communications to the Temotu province were lost.[21] When communications were restored on October 24, it was reported that there was only minor tree damage on the islands of Utupua and Vanikolo.[9] On Tikopia, crops sustained damage, though the effects were considered light given the circumstances.[3][9][22] As Cyclone Xavier passed the eastern islands of Vanuatu, it produced rough seas with moderate to heavy swells, beach erosion, and strong gusty wind; however, no serious damage was reported.[3][9]