The Chicago blues is a form of blues music that developed in Chicago, Illinois, by taking the basic acoustic guitar and harmonica-based Delta blues, making the harmonica louder with a microphone and an instrument amplifier, and adding electrically amplified guitar, amplified bass guitar, drums, piano and sometimes saxophone and trumpet. The music developed in the first half of the twentieth century due to the Great Migration (African American) when Black workers moved from the South into the industrial cities of the North such as Chicago.

Originally, the Chicago Blues was street-corner based music. But after the music quickly gained popularity, it became a giant commercial enterprise. Soon the new style of music reached out and touched Europe, which led to many famous English rock n' roll bands to get their inspiration from the Chicago Blues.

At first, the Blues clubs in Chicago were filled with black performers, and the music itself was aimed for black audiences. Most of the Blues clubs were on the far south side of Chicago, so white people did not visit them. Later, however, more and more white audiences visited the clubs and listened to the music. This caused clubs to open up on the north side. In addition, more white men started playing the Blues after it became popular.

Chicago Blues has a more extended palette of notes than the standard six-note blues scale; often, notes from the major scale and dominant 9th chords are added, which gives the music a more of a "jazz feel" while remaining in the confines of the blues genre. Chicago blues is also known for its heavy rolling bass. Like Delta Blues, Chicago Blues often uses a harmonica and occasionally saxophones. 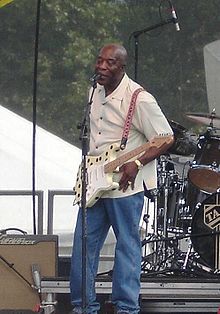 Bluebird was an important Chicago Blues label, notably due to the work of A&R/producer Lester Melrose, who created what is known as the "Bluebird Sound."[1]. Many blues artists recorded for Bluebird, if only briefly, while Arthur Crudup, Lil Green and Tommy McClennan spent virtually their entire career with the label.

Chess Records, run by brothers Leonard and Phil Chess, was probably the most famous of the Chicago record labels to feature or promote the blues. Musician and critic Cub Koda even described Chess Records as "America's greatest blues label."[2] It was active from 1950–1969 when the brothers sold the company. Most solo artists also did double duty as session musicians on the records of others.

Cobra Records (together with its Artistic subsidiary) was an independent record label that operated from 1956 to 1959. The label was important for launching the recording careers of Chicago blues artists Otis Rush, Magic Sam, and Buddy Guy. It signaled the emergence of a distinctive West Side Sound.

Cobra Records was started on Chicago's West Side in 1956 by Eli Toscano (a record store and television-repair shop owner) and Howard Bedno. When his previous record label, Abco Records, failed to generate much interest, Toscano approached Willie Dixon about working for Cobra. Dissatisfied with his arrangement with Chess Records, Dixon joined Cobra. There he served in many capacities, including talent scout, producer, arranger, songwriter, and bassist, as well as guiding its artistic vision.

Delmark was formed when Bob Koester moved his Delmar label from St. Louis to Chicago in 1958 and remains active today. They are still known for Jazz and Blues. Artist recorded by the label includes Roscoe Mitchell, Junior Wells, Robert Lockwood Jr. and Sonny Boy Williamson II.

Twinight Records was a minor American recording label, founded in Chicago in 1967 by Howard Bedno and Peter Wright, who later added E. Rodney Jones as a partner. Specializing in R&B and soul music, for a few months the label was called Twilight Records until it was discovered that another company already owned the Twilight name. Over five years, the label released (or at least recorded) 55 singles and charted seven times. The label’s star was Syl Johnson, an established R&B performer who had had a number of hits for King Records and who would have his biggest hits for Hi Records in the 1970s. Johnson’s hits at Twinight included "Come on Sock it to Me" (1967), "Sorry ‘Bout Dat", "Different Strokes", "Is It Because I'm Black" (1969), and "Concrete Reservation". Testament records