Bicycle use in Portland, Oregon has been growing rapidly, having nearly tripled since 2001; for example, bicycle traffic on four of the Willamette River bridges has increased from 2,855 before 1992 to over 16,000 in 2008, partly due to improved facilities.[1] Approximately 8% of commuters bike to work in Portland, the highest proportion of any major U.S. city and about 10 times the national average.[2]

Due to its urban bicycling efforts, Portland has earned multiple "bicycle-friendly city" awards,[3][4][5] including being awarded platinum status by the League of American Bicyclists,[6][7] and it ranks highly among the most bicycle friendly cities in the world.[8]

Portland's reputation as a bike-friendly City was enhanced by The Yellow Bike Project, a 1994 civic engagement action and the brainchild of Portland, Oregon activist Tom O'Keefe. After watching the documentary "Sex Drugs & Democracy", O'Keefe proposed painting donated bikes – repaired by at-risk-youth served by the Portland based Community Cycling Center – bright yellow, and deploying them for free use around Portland. "Gratis Pedalis Feralvus" was a tongue-in-cheek slogan for the quirky eco-transportation project.

O'Keefe enrolled fellow environmental activists Joe Keating and Steve Gunther along with the Community Cycling Center (led then by Brian Lacy) into promoting and supporting the project. Project launch: On a weekday in East Portland, in front of a local radio station, a press conference was arranged by United Community Action Network (UCAN) Directors O'Keefe & Keating. They presented about a dozen bright yellow bicycles for free distribution. Local media showed up and that night's evening news featured what looked like scores of bright yellow bikes ridden by a variety of Portland characters. All of the Bikes were affixed with labels that read: "FREE COMMUNITY BIKE - For Pickup or Repair Call (503)....A local Earl Scheib franchise painted the bikes at no charge. The bikes' tires, spokes, pedals, chains, and even the handlebars were all painted mustard yellow.

The project was one of the first community bicycle programs in the United States. The Yellow Bike Project was reported in The New York Times,[9] received editorial condemnation from the Wall Street Journal[citation needed] (an affront to private property rights) and culminated in a nationally broadcast Yellow Bike story on the CBS News magazine 48 Hours.[citation needed] The Yellow Bike Project provided nearly 400 free bicycles available for unrestricted use in downtown Portland in its first six months.

Interest in city transportation planning began in the early 1970s after the state of Oregon passed comprehensive state land use laws with the city of Portland drafting its first 'Bicycle Master Plan' in 1973.[10]

The city's first bike plan that was adopted in 1973, titled the '1973 Portland Bike Plan', called for nearly 190 miles of bicycle infrastructure to be built in the city and created a citizen's Bicycle Advisory Committee along with a Bicycle Program within the city’s Transportation Bureau.[11] 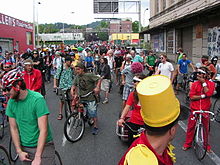 Portland is developing a network of bicycle boulevards to make cycling easier and safer. The east side of Portland is particularly well-suited for this technique due to its consistent grid of north/south and east/west streets. The boulevards are defined with a combination of street markings, signs, and better signals for crossing busy intersections.[13]

Another route is the Vera Katz Eastbank Esplanade.

In order to try to prevent car-bike crashes the city has painted sections of hazardous bike lanes blue.[14]

More recently, the city has installed experimental bike boxes that allow bicyclists to wait ahead of motorized traffic at red lights.[15]

An important milestone in Portland's utility cycling infrastructure was the expansion of the sidewalks of Hawthorne Bridge in 1997, which significantly improved the safety and ease of bicycle commuting across the Willamette River.

In 2004, a bike path along the Sunset Highway between Sylvan and Cedar Hills was completed, helping to link Beaverton and downtown Portland.

The Bicycle Transportation Alliance sponsors an annual Bike Commute Challenge, in which thousands of commuters compete for prizes and recognition based on the length and frequency of their commutes.[20]

Pedicabs are also used for special events and weddings.