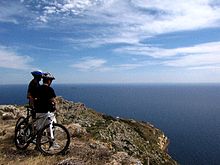 Bike Adventure in the North of Malta with Malta By Bike

The popularity of Cycling in Malta as a sport, a means of commuting and of exploring the island of Malta is on the increase. In recent years, the Maltese authorities, most notably the Malta Transport Authority, have worked hard to make this activity more accessible and safer[citation needed]. Thanks also to some pioneering enterprises in this area,[1] cycling is becoming a viable alternative to private cars for travel in the island.

Cycling is firmly ingrained in Maltese cultural heritage[citation needed]. As you would expect in an island whose official religion is Roman Catholic and where an estimated 95 percent profess to belong to this religion,[2]cycling also features prominently in religious celebrations.

Most notably, the village feast of Zabbar, which is held annually on the first Sunday after the 8 September, features a motorcycle and bicycle pilgrimage each starting from Mosta and Rabat respectively. This is because the Zabbar church is dedicated to “Our Lady of Grace,” (Madonna tal-Grazzja) who is also the patron of cyclists.[3]

Indeed, an increasing number of areas in the capital, Valletta, and elsewhere are being pedestrianized, making cycling the ideal means of visiting them. Despite its size, however, Malta’s topography is quite hilly and cycling may be quite challenging in some areas.

In 2006, the Malta Transport Authority introduced bicycle lanes to promote and encourage more people to use bicycles as a greener alternative to private car use.[5]although cyclists do not normally use the lanes due to unsafe surfaces mainly attributed to poor planning. Although initially motorists did not always respect these lanes, the situation has improved significantly. Cyclists are also allowed to use bus lanes. However cycling is not allowed in tunnels [6]. The few cycle lanes tend to end and start abruptly. They rarely follow regular commuting routes and do not seem to be maintained very regularly. Sliema local council allows slow cycling along its promenade that does not hinder pedestrians, however this does not extend into Bisazza street, a main shopping precinct, at the end of the promenade [7]. However despite citing the support of sustainable and non-polluting modes of transport, there is no cohesive and specific national programme aimed at encouraging cycling [8].

On the road conditions

Conditions for cyclists on the road are improving, although cyclists should remain wary as to which routes to use and which to avoid. Cycling on main roads may at times be dangerous. Due to Malta's party scene and poor drink driving record this is particularly true of early morning rides over the weekend. Cyclists are legally required to wear cycling helmets [9].

Road conditions themselves are improving, although potholes and lack of proper tarmacing, especially in smaller towns, remains an issue.

The Malta Transport Authority has installed a number of bicycle parking bays in various spots around the island, particularly, in tourist areas.

While bicycle theft in Malta is not high, the usual precautions of locking the bike should be taken.

With no trains and no underground, the traditional yellow/orange public busses are the main means of public transport in Malta. Currently, the Maltese Government is privatizing the public bus system and is in negotiations with the Arriva (Malta) Consortium to this end.[10] It is currently not possible to transport bicycles on public buses. However, it is possible to schedule the transportation of bicycles to any locations in Malta.[11]