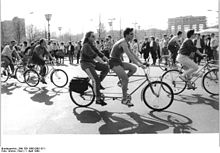 Cycling in Berlin is a significant form of transport in the German capital where around 500,000 daily bike riders accounted for 13% of total traffic in 2009.[1] The city has a highly developed bike (cycle) lane system[2] and it is estimated that Berlin has 710 bicycles per 1000 residents.

A section of the Berlin Wall Trail

In addition to a variety of cycling paths and bicycle lanes there are also Fahrradstrassen, bicycle streets where bikes have priority and vehicles are limited to 30kmh.

Signage for the Berlin Wall Trail

On the Berlin to Usedom trail

There are a number of regional and long-distance bike paths that run through Berlin. These include the Berlin-Copenhagen trail, Berlin-Usedom Cycle Route and the European Cycle Route R1.

Riders are allowed to carry their bicycles on Berlin's S-Bahn and U-Bahn trains, on trams, and on night buses.[4]

A Call a Bike in Berlin

Berlin's bicycle hire system, Call a Bike, is run by the Deutsche Bahn.