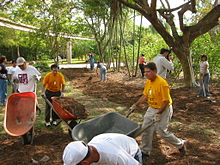 Volunteers with Hands On Miami help out at Zoo Miami.

Volunteering is generally considered an altruistic activity, intended to promote good or improve human quality of life, but people also volunteer for their own skill development, to meet others, to make contacts for possible employment, to have fun, and a variety of other reasons that could be considered self-serving. Volunteerism is the act of selflessly giving your life to something you believe free of pay.

Volunteering takes many forms and is performed by a wide range of people. Many volunteers are specifically trained in the areas they work in, such as medicine, education, or emergency rescue. Other volunteers serve on an as-needed basis, such as in response to a natural disaster or for a beach-cleanup.

In a military context, a volunteer army is an army whose soldiers chose to enter service, as opposed to having been conscripted. Such volunteers do not work for free and are given regular pay.

Some files for helping people in a volunteers station in Shenzhen, People's Republic of China.It's said there were more than 250000 volunteers in Shenzhen, one of the most developed cities in China in 2010.[1]

Based on a case study in China, Xu and Ngai (2011) revealed that the developing grassroots volunteerism can be an enclave among various organizations and may be able to work toward the development of civil society in the developing countries. The researchers developed a “Moral Resources and Political Capital” approach to examine the contributions of volunteerism in promoting the civil society. Moral resource means the available morals could be chosen by NGOs. Political capital means the capital that will improve or enhance the NGOs’ status, possession or access in the existing political system.[2] Moreover, Xu and Ngai (2011) distinguished two types of Moral Resources: Moral Resource-I and Moral Resource-II (ibid). ① Moral Resource I: Inspired by Immanuel Kant’s (1998 [1787]) argument of “What ought I to do,” Moral Resource-I will encourage the NGOs’ confidence and then have the courage to act and conquer difficulties by way of answering and confirming the question of “What ought I to do.”[3] ② Moral Resource II: given that Adorno (2000) recognizes that moral or immoral tropes are socially determined, Moral Resource-II refers to the morals that are well accepted by the given society.[4] Thanks to the intellectual heritage of Blau and Duncan (1967), two types of political capital were identified: ① Political Capital-I refers to the political capital mainly ascribed to the status that the NGO inherited throughout history (e.g., the CYL). ② Political Capital-II refers to the Political Capital that the NGOs earned through their hard efforts.[5] Obviously, “Moral resource-I itself contains the self-determination that gives participants confidence in the ethical beliefs they have chosen”,[6] almost any organizations may has Moral Resource-I, while not all of them have the societal recognized Moral Resource-II. However, the voluntary service organizations predominantly occupy Moral Resource-II because a sense of moral superiority makes it possible that for parties with different values, goals and cultures to work together in promoting the promotion of volunteering. Thus the voluntary service organizations are likely to win the trust and support of the masses as well as the government more easily than will the organizations whose morals are not accepted by mainstream society. In other words, Moral Resource II helps the grassroots organizations with little Political Capital I to win Political Capital-II, which is a crucial factor for their survival and growth in developing countries such as China. Therefore, the voluntary service realm could be an enclave of the development of civil society in the developing nations.[7]

Micro-volunteering, is a term that describes an un-paid task that can be done via an internet-connected device and in small increments of time. It is distinct from virtual volunteering in that it typically does not require an application process or training period.[9][10][11] Micro-volunteering via smart-phone was pioneered by a San Francisco-based social enterprise called The Extraordinaries in 2008.[12][13][14]

Environmental volunteering refers to volunteers who contribute towards environmental management. Volunteers conduct a range of activities including environmental monitoring, ecological restoration such as re-vegetation and weed removal, and educating others about the natural environment. 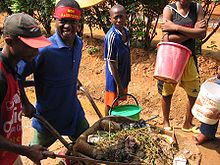 Children cart dirt and debris away during a community clean-up day in Yaoundé, Cameroon.

School systems around the world rely heavily on volunteers and donations in order to run effectively.[citation needed] In some countries, whenever the economy is down, the need for volunteers and resources increases greatly.[15] There are many opportunities available in the school system for volunteers to take advantage of, especially if you have a special skill or trade. There are not many requirements in order to become a volunteer in the school system. Whether you are a parent, grandparent or just a community member most schools just require a volunteer form be completed. Much like the benefits of any type of volunteering there are great rewards for the volunteer, student, and school.

These benefits include but are not limited to:[citation needed]

School Benefits – Provided with additional service without having to have added costs; teachers are given extra time for educational purposes and planning; a positive relationship between the community and the school.

Volunteer Benefits – Parents become involved in their child’s school and education; new talents that one never knew they had are discovered; participants experience a sense of personal satisfaction; individuals meet new people and develop new friendships.

A majority of the companies at the Fortune 500 allow their employees to volunteer during work hours. These formalized Employee Volunteering Programs (EVPs), also called Employer Supported Volunteering, are regarded as a part of the companies' sustainability efforts and their social responsibility activities.[16] According to information from VolunteerMatch, a service that provides Employee Volunteering Program solutions, the key drivers for companies that produce and manage EVPs is that it builds brand awareness and affinity, strengthens trust and loyalty among consumers, enhances corporate image and reputation, improves employee retention, increases employee productivity and loyalty and provides an effective vehicle to reach strategic goals.[17]

Community volunteering refers to volunteers who work to improve community enhancement efforts in the area in which they live. Neighborhood, church, and community groups play a key role in building strong cities from the neighborhoods up. Supporting these understaffed groups can enable them to succeed in a variety of areas, which connect social, environmental, and economic boundaries. Volunteers can conduct a wide range of activities. Some choose to support a variety of groups as a "volunteer broker."

In almost all modern societies, the most basic of all values is people helping people and, in the process, helping themselves.[citation needed] However, a tension can arise between volunteering and the state-provided services, so most countries develop policies and enact legislation to clarify the roles and relationships among stakeholders and identify and allocate the necessary legal, social, administrative, and financial support. This is particularly necessary when some voluntary activities are seen as a challenge to the authority of the state, e.g. on 29 January 2001, President Bush cautioned that volunteer groups should supplement, not replace, the work of government agencies.[18] Volunteering that benefits the state but challenges paid counterparts raises the ire of labor unions representing the paid counterparts as in the case of volunteer fire departments, particularly in combination departments. 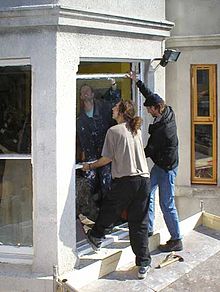 Difficulties in this model of volunteering can arise when this is applied across national borders. A state sending volunteers to another state can be viewed as a breach of sovereignty and a lack of respect towards the national government of the proposed recipients. Thus, when states negotiate the offer and acceptance of aid, motivations become important, particularly if donors may postpone assistance or stop it altogether. Three types of conditionality have evolved:

Some international volunteer organisations define their primary mission altruistically as fighting poverty and improving the living standards of people in the developing world, e.g. Voluntary Services Overseas has almost 2,000 skilled professionals working as volunteers to pass on their expertise to local people so that, when they return home, their skills remain. When these organisations work in partnership with governments, the results can be impressive. However, when other organisations or individual First World governments support the work of volunteer groups, there can be questions as to whether their real motives are poverty alleviation or wealth creation for some of the poor or policies intended to benefit the donor states. This confusion exists because experience shows[who?] that what is volunteered can distort the foreign and economic policy of the country receiving the aid[further explanation needed]. The economies of many low-income countries suffer from "industrialisation without prosperity" and "investment without growth". This arises because "development assistance" guides many Third World governments to pursue "development" policies that have been wasteful, ill-conceived, unproductive or even so positively destructive that they could not have been sustained without outside support.[19]

Indeed, some of the offers of aid have distorted the general spirit of volunteering, treating local voluntary action as "contributions in kind", i.e. as conditions requiring local people to earn the right to donor "largesse" by modifying their behaviour. This can be seen as patronising and offensive to the recipients because the aid expressly serves the policy aims of the donors rather than the needs of the recipients.

The track record shows that making any aid conditional on policy reforms is often ineffective.[citation needed] Conditionality only works when there is a strong domestic commitment to reform and the recipient governments are democratic, i.e. they are accountable to their own electorates.[citation needed] Volunteer organizations and their funding donors should respect the governments of the countries they wish to help and build on the deep-rooted traditions of people to help one another, and thereby provide an important ingredient for social and democratic development.[citation needed]

In the 1960s, Ivan Illich offered an analysis of the role of American volunteers in Mexico in his speech entitled, "To Hell With Good Intentions". His concerns, along with critics such as Paulo Freire and Edward Said, revolve around the notion of altruism as an extension of Christian missionary ideology and the sense of responsibility/obligation driving the concept of noblesse oblige, first developed by the French aristocracy as a moral duty derived from their wealth. Simply stated, these both propose the extension of power and authority over indigenous cultures around the world.

The field of medical tourism (referring to volunteers traveling overseas to deliver care) has recently attracted negative criticism vis-a-vis the alternative notion of sustainable capacities (working in the context of long-term, locally-run but foreign-supported infrastructures). A preponderance of this criticism has appeared largely in the scientific and peer-reviewed literature.[20][21][22] Recently, media outlets with more general readerships have published such criticisms, as well.