Rock N' Roll Racing is a battle-racing video game developed by Silicon & Synapse (now known as Blizzard Entertainment) and published by Interplay for the Sega Mega Drive/Genesis and the Super Nintendo Entertainment System in 1993.[1] The background music consists of instrumental versions of several heavy metal and rock n' roll songs, hence the game's title. The game was ported to the Game Boy Advance in 2003.

Rock N' Roll Racing was initially developed as "RPMII", a sequel to the company's SNES game RPM Racing. At the end of the project, Interplay marketing added licensed music and changed the name to Rock N' Roll Racing. It is also similar in gameplay to Racing Destruction Set where it got its logic/AIi engine and the NES game R.C. Pro-Am developed by Rare in 1988.

The game pits four racers against each other, with up to two of them being player-controlled and the rest being AI opponents. Each race consists of four laps around tracks viewed from an isometric perspective, which enables players to discern the presence of frequent sloping sections spread throughout the game's various tracks. In addition to navigating the turns, racers must also maneuver hills and dips without falling or jumping over the guard rail at the track's edge.

A race on the SNES version.

While it is a racing game, there is heavy emphasis on attacking competitor's vehicles; since the cars always reappear with full health just a few seconds after blowing up, the only "harm" done is falling behind in the race. Players are rewarded with a monetary "attack bonus" each time they provide the finishing blow against another car using their projectile weapons (and a similar "lapping bonus" when they gain a full one-lap lead on an opponent during the race). In accordance with the continual destruction and restoration of the racing vehicles, the tracks are littered with mines and health power-ups, as well as money power-ups. Other hazards include oil slicks, snow drifts, and lava, depending on the planet hosting the race.

Players are updated on the race by commentator "Loudmouth Larry" (Larry "Supermouth" Huffman), who makes comments like "The stage is set, the green flag drops!" (or "Let the carnage begin!"), and "Rip: is about to blow!" in an enthusiastic tone at appropriate moments during the race. (There is a slight pause between a character's name and any given phrase, as each name and each phrase is its own sound effect, which can be heard in the F/X screen.)

Between races, players can spend the money they've earned on more advanced equipment for their vehicle (engines, tires, shocks, and shielding) or on increasing their capacity for the frontal weapon (energy blasts or missiles), rear weapon (slip sauce or mines), and turbo boost (jump jets or nitro boosts), each of which can max out at seven. Despite their limited capacity, every vehicle will have its weapon and boost charges replenished at the completion of each lap in a race. Racers can also buy more advanced car models, and any upgrades already acquired are disregarded when purchasing a new vehicle.

The first three drivers to complete a race are awarded both money and points according to the final standings. Points are required for advancement to the next racing division or the next planet, with two divisions on each planet. A player who has not obtained enough points during a division's racing season must repeat the division, again starting with zero points, but all changes to the player's money and car remain in effect. In two-player mode, when only one player has sufficient points, the character in charge of advancement asks "Leave your loser friend behind?", allowing the leading player to continue alone by removing the other player from the game. The dropped player can continue from that point later by using their most recent password, once the game is reset.

Passwords are given out at the beginning of each new "racing season" (each planet has its own definition of how many races make up a season, but early advancement will automatically start a new season), and they are located at the bottom of the F/X screen (accessible from the menu between races). These passwords are a complex code, consisting of three 4-digit sections, and they dictate everything about the players' progress: the character used, the vehicle type and color, weapons and parts upgrades, racing planet and division, difficulty setting, and money. The Game Boy Advance version of the game uses an EEPROM chip to save the player's progress in lieu of the password system.

The password codes only allow the player to save a maximum of $999,990 (six digits); if there are more than six figures in the bank account, the password truncates the leftmost digits over six (e.g. if there's $1,002,000 when the player quits, there will be only $2,000 when using the password to continue later). Due to the two-player password function, it's possible to "cheat" by entering the same password for both players or by entering passwords for players who were at entirely different points in the game. The password with the lowest difficulty setting and on the earliest planet and racing division will be used as the basis for play from then on, which allows for a Warrior-skill character with a maxed-out vehicle to race against Rookie-class AIs in the Rookie skill mode.

Though a password generator QBASIC program exists, the passwords it creates often result in a glitch, causing the player to race on glitchy planets—that exist only as a bug and can crash the game—after racing on Inferno. In the Rookie skill mode, however, they work perfectly, as long as one doesn't try to take the character beyond the third planet using the password.[2]

The heroes of Rock N' Roll Racing are the player-selectable characters, who each originate from a different planet.

There are six characters that are readily selectable, each of which has a +1 enhancement for two of the four skills that are related to how well their vehicle handles: acceleration, top speed, cornering, and jumping. Olaf, from The Lost Vikings, another Silicon & Synapse game that was in development at the same time, is a hidden character, requiring a code to access him, and instead of two skills, Olaf has three. At the character selection screen (with Tarquinn showing on the screen), while holding down L, R, and Select, press left then right on the d-pad, and Olaf will appear. There is an eighth character, also hidden, who has no picture or name but has the +1 bonus for all four of the available skills. This character is sometimes called the "Phantom", and he/she/it is only accessible using specially-crafted passwords.

Many of the characters, location names, etc. take their name or likeness from hard rock music. Snake Sanders is based on Whitesnake vocalist David Coverdale, Jake Badlands is named for Jake E. Lee, guitarist for a band called Badlands, and Cyberhawk is most likely a reference to the cover art for the Judas Priest album Screaming for Vengeance.

The villains are the AI-controlled opponents. Each planet has its own dominant local racer.

Rip and Shred appear on every planet in 1 player mode. Rip is also in every race in 2 player mode, while the second player displaces Shred as the fourth racer. 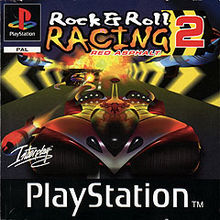 A sequel to the original Rock N' Roll Racing was made for the 32-bit PlayStation console by Interplay. The game was sold in Europe as Rock & Roll Racing 2: Red Asphalt and in the United States as just Red Asphalt.

It featured an Underground comix style in the character's profiles & ending-videos, a system to upgrading each character's driving/combat skills similar to RPG games and also contained new Hi-Quality soundtracks of Experimental, Electro-Industrial tendencies.

The game didn't become as popular as the first, most likely due to Interplay's closure near the time of the game's release. Also, it retained little of the gameplay that had made the first game so unique and popular.