The peso is the currency of Chile. The current peso has circulated since 1975, with a previous version circulating between 1817 and 1960. The symbol used locally for it is $. The ISO 4217 code for the present peso is CLP. It is subdivided into 100 centavos, although no centavo denominated coins remain in circulation. The average exchange rate of the Chilean Peso to the U.S Dollar was 1 U.S. Dollar to 510.38 Chilean Pesos in 2010.[1]

The first Chilean peso was introduced in 1817, at a value of 8 Spanish colonial reales. Until 1851, the peso was subdivided into 8 reales, with the escudo worth 2 pesos. In 1835, copper coins denominated in centavos were introduced but it was not until 1851 that the real and escudo denominations ceased to be issued and further issues in centavos and décimos (worth 10 centavos) commenced. Also in 1851, the peso was set equal 5 French francs on the silver standard, 22.5 grams pure silver. However, gold coins were issued to a different standard to that of France, with 1 peso = 1.37 grams gold (5 francs equalled 1.45 grams gold). In 1885, a gold standard was adopted, pegging the peso to the British pound at a rate of 13⅓ pesos = 1 pound (1 peso = 1 shilling 6 pence). This was reduced in 1926 to 40 pesos = 1 pound (1 peso = 6 pence). From 1925, coins and banknotes were issued denominated in cóndores, worth 10 pesos. The gold standard was suspended in 1932 and the peso's value fell further. The escudo replaced the peso on January 1, 1960 at a rate 1 escudo = 1000 pesos.

Right after the Military Government in Chile (1973–1990), the obverse designs of the 5 and 10 peso coins were changed. Those coins bore the image of a winged female figure wearing a classical robe. She was portrayed as if she had just broken a chain tying her two hands together, since from both of her wrists a piece of chain can be seen hanging. To her side, in small Roman numerals, the date of the coup d'état is marked, and underneath the word Libertad (Spanish for freedom) is written in capitals. After the return of democracy, a design with the portrait of Bernardo O'Higgins was used. In 2001 a newly redesigned 100 peso coin bearing the image of a Mapuche woman began to circulate.

In February 2010 it was discovered that on the 2008 series of the 50 peso coins the country name "CHILE" had been misspelled as "CHIIE". The national mint said that it did not plan to recall the coins. The coins, worth about 9 cents (US) at the time, subsequently became collectors' items.[2]

The 2000 pesos note has been issued as a polymer banknote since September 2004, the 5000 pesos note switched to polymer on September 2009, and the 1000 will at some point. As of January 2011[update], the 1000, 10000, and 20000 pesos notes are the values still issued on cotton paper, but the 1000 will switch to polymer at some point further ahead. All notes have the same 70mm height, while their length varies on 7mm steps according to their value: the shortest is the 1000 pesos note and the longest is the 20,000 pesos.[4] This was the first time that a whole new family of banknotes were put into circulation not because of the effects of inflation. The new notes are substantially more difficult to falsify because of new security measures.

Colloquial Chilean Spanish has informal names for some banknotes and coins. These include luca for a thousand pesos, quina for five hundred pesos (quinientos is Spanish for "five hundred"), and gamba for one hundred pesos. These names are old: for example gamba and luca applied to 100 and 1000 escudos before 1975.

Value of the peso 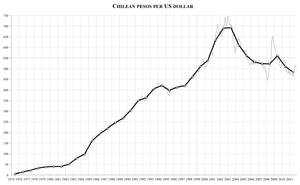 Current Chilean pesos per US dollar (1975–2010). Note: The chart shows averages for the year. Since the peso is free floating, there is much more intra-annual variation than what the chart shows.