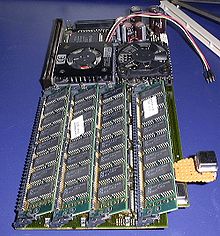 In 1995 Amiga Technologies GmbH announced they were going to port AmigaOS to PowerPC. As part of their Power Amiga plan, Amiga Technologies was going to launch new Power Amiga models using the PowerPC 604e RISC CPU and in co-operation with Amiga Technologies Phase5 would release AmigaOS 4-compatible PowerPC accelerator boards for old Amiga 1200, Amiga 3000 and Amiga 4000 models.[1][2] However, in 1996 Amiga Technologies' parent company ESCOM entered into deep financial problems and could not support Amiga development. Due to a lack of resources, the PowerPC project at Amiga Technologies stalled and Phase5 had to launch accelerators without a PowerPC-native AmigaOS. As a stopgap solution, a new PowerUP kernel was created allowing new PPC-native software run parallel with 68k Amiga OS.[3] To complicate things even further, former Commodore International chief engineer Dave Haynie questioned Phase5's plans to develop PowerPC boards without Amiga Technologies: "Their approach on the software front is kind of a hack, and on the hardware front it's just too much like the old Commodore; at best, they'll wind up with interesting, non-standard, and overpriced machines that can't keep up with the rapid changes in the industry."[4]

Nevertheless Phase5 had decided to go their own way and develop a PowerPC-based AmigaOS-compatible computer without Amiga Technologies. They also announced plans to write a new Amiga OS-compatible operating system.[5] Wolf Dietrich (managing director of phase5) earlier commented that "we found that Amiga Technologies offers us no sort of outlook or basis for developing into the future".[6]

PowerUP kernel is a multitasking kernel developed by Ralph Schmidt for Phase5 PowerPC accelerator boards.[9] The kernel ran alongside the AmigaOS where PPC and 68k native software could run parallel.[10]

The PowerUP kernel used ELF as the executable format and supported runtime linking, relocations and custom sections; it used GCC as its default compiler.[11] This caused controversy in the Amiga community when developers thought that phase5 was bringing "too Unixish stuff" to Amiga.[12] [13] It was feared that PowerUP kernel introducing shared objects and dynamic linking would replace the original shared library model and shared objects were indeed adapted into AmigaOS.[14][15]

Another controversy was caused by different designs and purposes of Blizzard PPC and Cyberstorm PPC boards. The Blizzard PPC was designed to fit Amiga 1200 as a standalone device which would not need installing additional software but utilised Amiga's unique AutoConfig feature. This caused problems to some 3rd party developers who developed their own PPC kernels for PowerUP cards since they could not work on Amiga 1200 without removing the PowerUP kernel first.[16]

On May 12, 1997, Phase5 announced PowerUP accelerator board for Amiga 2000 computers. The card never got past the prototype stage and hence never released to the public.

This accelerator board was designed for Amiga 1200 and plugged into the trapdoor slot. It used a low cost, low end PowerPC 603e processor designed for portable and embedded use.