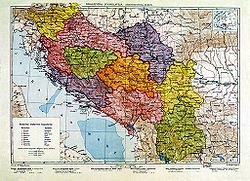 Map showing Yugoslav banovinas in 1929 prior to the agreement.

The Cvetković-Maček Agreement (Croatian: Sporazum Cvetković-Maček; Serbian: Споразум Цветковић-Мачек/Sporazum Cvetković-Maček) was a political agreement on the internal divisions in the Kingdom of Yugoslavia which was settled on August 23, 1939 by Yugoslav prime minister Dragiša Cvetković and Vladko Maček, a Croat politician. The agreement set up the Banovina of Croatia which was specifically intended to include as many ethnic Croats as possible, effectively creating a Croatian sub-state in Yugoslavia which Croat politicians lobbied for since the country was founded in 1918. The agreement intended to divide the territory of Bosnia and Herzegovina between Serbs and Croats.

The agreement became obsolete when in April 1941 Germany invaded Yugoslavia and established the marionette Independent State of Croatia as a de jure independent Croatian state. On November 25, 1943 a meeting of the anti-fascist liberation movement of Bosnia and Herzegovina (ZAVNOBiH) was held in Mrkonjić Grad and presided over by Josip Broz Tito. The meeting produced a plan for the post- liberation Yugoslavia's internal divisions which were to consist of 6 republics, thereby ending any prewar compromises and establishing non-ethnically based republics. Due to this, November 25 is celebrated as statehood day in Bosnia and Herzegovina.