Cut the Rope is an award-winning physics-based puzzle video game for handheld gaming platforms. It was developed in 2010 by Russian developers ZeptoLab and is published by Chillingo.[1] On iOS, it uses the Crystal and Game Center social networking services. On Android, it uses Scoreloop social networking services. In 2011, it was followed by a sequel, Cut the Rope: Experiments, published by ZeptoLab themselves.

On 4 October 2010 "Cut the Rope" for iOS was made available through the App Store. A native (HD) version for the iPad[2] was released on 6 October 2010. This was followed by the release of a free version with fewer levels for each device on the next day, called Cut the Rope Lite and Cut the Rope HD Lite respectively.

On 4 August 2011, ZeptoLab published Cut the Rope: Experiments, the sequel to Cut the Rope.[6] While its gameplay and presentation closely matches that of Cut the Rope, it introduces some new gameplay elements. 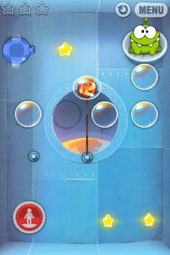 A level of Cut the Rope. The candy floats in a bubble, which can be popped with a touch or blown to the right with the blue bellows. The red button reverses the direction of gravity.

The object of each level is to manoeuver a piece of candy into the mouth of a green cartoon frog called "Om Nom". The candy hangs by one or several of the titular ropes which the player can cut with a swipe of their finger, and can also be manipulated through other objects including bellows and floating bubbles.[2] Each level pack introduces new objects.

The other objectives are to pick up up to three stars per level by touching them with the candy, to keep the candy within the box, and to avoid spike and electricity hazards. Levels are scored with zero to three stars, according to how many the player picked up, and also with a point score depending on the number of stars collected and the time required for the completion of the level.

Cut the Rope groups content in "boxes" containing 25 levels each, which are occasionally added through updates. These include:

The sequel, Cut the Rope: Experiments, groups 25 levels each into "experiments". These include:

In addition to its commercial success, Cut the Rope was very well received by critics. As of July 2011, the aggregator website Metacritic lists an aggregated score of 93 based on 14 reviews, which it rates as "universal acclaim".[7] IGN praised the game for having "the addictive qualities of Angry Birds – great puzzles, near-perfect use of touch controls, and cute personality".[10] Gamespot described it as "fresh, challenging, gorgeous, and highly entertaining", while noting that the game's elements are occasionally difficult to control precisely.[9]

At WWDC 2011, Cut the Rope won an Apple Design Award for the iOS platform.[14] In March 2011, it won the 7th British Academy Video Games Awards in the "Handheld" category, the first iOS game to do so.[15]

In July 2011, Zepto Lab and comics publisher Ape Entertainment announced that a comic book series will be published as a stand-alone app. The comics will tell the backstory of the candy-eating monster, Om Nom, and introduce new characters.[15]