Nicholas of Kues (1401 – August 11, 1464), also referred to as Nicolaus Cusanus and Nicholas of Cusa, was a cardinal of the Catholic Church from Germany (Holy Roman Empire), a philosopher, theologian, jurist, mathematician, and an astronomer. He is widely considered one of the great geniuses and polymaths of the 15th century. He is today recognized for significant spiritual, scientific and political contributions in European history, notable examples of which include his mystical or spiritual writings on 'learned ignorance' (and mathematical ideas expressed in related essays), as well as his participation in power struggles between Rome and the German states of the Holy Roman Empire.

Nicholas of Cusa or Kues (Latinized as "Cusa") was the second of four children of Johan Krebs (or Cryfftz) and Katherina Roemer. His father was "a prosperous boat owner and ferryman."[1] He entered the University of Heidelberg in 1416 as "a cleric of the diocese of Trier" studying the liberal arts. He then received his doctorate in Canon law from the University of Padua in 1423. Afterwards, he entered the University of Cologne in 1425 as "a doctor of canon law" which it appears he both taught and practiced there. Following this brief period in Cologne, he became secretary to Otto of Ziegenhain, the Archbishop of Trier, and represented him in Rome in 1427. After the death of Otto, during the period when the archbishopric of Trier was contested by opposing parties, he attended the Council of Basel (1431–49), representing Ulrich von Manderscheid, one of the claimants.[2]

While present at the council, Nicholas wrote De concordantia catholica, a synthesis of ideas on church and empire balancing hierarchy with consent. This work remained useful to critics of the papacy long after Nicholas left Basel.[3] Nicholas was close to Cardinal Giuliano Cesarini, who had tried to reconcile pope and council, combining reform and hierarchic order. Nicholas supported transfer of the council to Italy to meet with the Greeks, who needed aid against the Ottoman Turks. He supported Pope Eugenius IV in his effort to bring the Eastern churches into union with the Western at such a "council of union." While returning from a mission to Constantinople to persuade the Greeks to attend the Council of Florence, Nicholas had a shipboard experience that led to his writing thereafter on metaphysical topics. Nicholas then represented the pope in Germany, becoming known as the Hercules of the Eugenian cause.[4]

After a successful career as a papal envoy, he was made a theologian by Pope Nicholas V in 1448 or 1449, and was named Bishop of Brixen in 1450. His role as papal legate to the German lands included wide travels. His local councils enacted reforms, many of which were not successful. Pope Nicholas canceled some of Nicholas' decrees, and the effort to discourage pilgrimages to venerate the bleeding hosts of Wilsnack (the so-called Holy Blood of Wilsnack) was unsuccessful. His work as bishop – trying to impose reforms and reclaim lost diocesan revenues – was opposed by Duke Sigismund of Austria. The duke imprisoned Nicholas in 1460, for which Pope Pius II excommunicated Sigismund and laid an interdict on his lands. Nicholas of Cusa was never able to return to his bishopric, however. Sigmund's capitulation in 1464 came a few days after Nicholas's death at Todi in Umbria.[5] 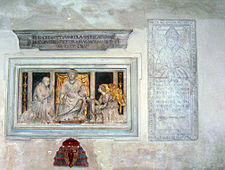 Tomb in S.Pietro in Vincoli, Rome, with the relief "Cardinal Nicholas before St Peter" by Andrea Bregno

Upon his death, his body was interred in the church of San Pietro in Vincoli in Rome, but was later lost. His monument, with a sculpted image of the cardinal, remains. In accordance with his wishes, his heart rests within the chapel altar at the Cusanusstift in Kues. To this charitable institution that he had founded he bequeathed his entire inheritance: it still stands, and serves the purpose Nicholas intended for it, as a home for the aged. The Cusanusstift houses also many of his manuscripts.[1]

Nicholas of Cusa was noted for his deeply mystical writings about Christianity, particularly on the possibility of knowing God with the divine human mind — not possible through mere human means — via "learned ignorance". Cusanus wrote of the enfolding of creation in God and their unfolding in creation. He was suspected by some of holding pantheistic beliefs, but his writings were never accused of being heretical.[6] Nicholas also wrote in De coniecturis about using conjectures or surmises to rise to better understanding of the truth. The individual might rise above mere reason to the vision of the intellect, but the same person might fall back from such vision.

Most of his mathematical ideas can be found in his essays, De Docta Ignorantia (Of Learned Ignorance), De Visione Dei (On the Vision of God) and On Conjectures. He also wrote on squaring the circle in his mathematical treatises.

Theologically, Nicholas anticipated the profound implications of Reformed teaching on the harrowing of Hell (Sermon on Psalm 30:11), followed by Pico della Mirandola, who similarly explained the descensus in terms of Christ’s agony.

Nicholas was widely read, and his works were published in the sixteenth century in both Paris and Basel. Sixteenth century French scholars, including Jacques Lefèvre d'Étaples and Charles de Bovelles cited him. Lefèvre even edited the Paris 1514 Opera.[7] Nonetheless, there was no Cusan school. In later centuries, Giordano Bruno quoted him; and some thinkers, like Gottfried Leibniz, were thought to have been influenced by him.[8] Neo-Kantian scholars began studying Nicholas in the nineteenth century, and new editions were begun by the Heidelberger Akademie der Wissenschaften in the 1930s and published by Felix Meiner Verlag [2].[9] Societies and centers dedicated to Cusanus can be found in Argentina, Japan, Germany, Italy and the United States.

Nicholas is also considered by many to be a genius ahead of his time in the field of science. Nicolaus Copernicus, Galileo Galilei and Giordano Bruno were all aware of the writings of Cusanus as was Johannes Kepler (who called Cusanus 'divinely inspired' in the first paragraph of his first published work). Predating Kepler, Cusanus said that no perfect circle can exist in the universe (opposing the Aristotelean model, and also Copernicus' later assumption of circular orbits), thus opening the possibility for Kepler's model featuring elliptical orbits of the planets around the Sun. He also influenced Giordano Bruno by denying the finiteness of the universe and the Earth's exceptional position in it (being not the center of the universe, and in that regard equal in rank with the other stars). He was not, however, describing a scientifically verifiable theory of the universe: his beliefs (which proved uncannily accurate) were based almost entirely on his own personal numerological calculations and metaphysics.[10]

Cusanus made important contributions to the field of mathematics by developing the concepts of the infinitesimal and of relative motion. He was the first to use concave lenses to correct myopia. His writings were essential for Leibniz's discovery of calculus (see Law of Continuity) as well as Cantor's later work on infinity[citation needed].

From the Catholic Encyclopedia (1913 edition):

The astronomical views of the cardinal are scattered through his philosophical treatises. They evince complete independence of traditional doctrines, though they are based on symbolism of numbers, on combinations of letters, and on abstract speculations rather than observation. The earth is a star like other stars, is not the centre of the universe, is not at rest, nor are its poles fixed. The celestial bodies are not strictly spherical, nor are their orbits circular. The difference between theory and appearance is explained by relative motion. Had Copernicus been aware of these assertions he would probably have been encouraged by them to publish his own monumental work.[11]

In 1433, Nicholas proposed reform of the Holy Roman Empire and a method to elect Holy Roman Emperors. Although it was not adopted by the Church, his method was essentially the same one known today as the Borda count, which is used in many academic institutions, competitions, and even some political jurisdictions, in original form and a number of variations. His proposal preceded Borda's work by over three centuries.[12]

Nicholas' opinions on the Empire, which he hoped to reform and strengthen, were cited against papal claims of temporal power in the sixteenth and seventeenth centuries. Protestant writers were happy to cite a cardinal against Rome's pretensions. Protestants, however, found his writings against the Hussites wrong. Nicholas seemed to give the church too much power to interpret Scripture, instead of treating it as self interpreting and self-sufficient for salvation, the principle of sola scriptura.[13]

Nicholas' own thought on the church changed with his departure from Basel. He tried arguing that the Basel assembly lacked the consent of the church throughout the world, especially the princes. Then he tried arguing that the church was unfolded from Peter (explicatio Petri).[14] This allowed him to support the pope without abandoning ideas of reform. Thus he was able to propose to Pius II reform of the church, beginning with the pope himself. Then it was to spread through the Roman curia and outward throughout Christendom.[15]

Nicholas and other Religions

Nicholas supported the campaign of Pope Pius II for a crusade against the Turks, but this is not the limit of his thought on interreligious issues. Shortly after the Fall of Constantinople in 1453, Nicholas wrote De pace fidei, On the Peace of Faith. This visionary work imagined a summit meeting in Heaven of representatives of all nations and religions. Islam and the Hussite movement in Bohemia are represented. The conference agrees that there can be una religio in varietate rituum, a single faith manifested in different rites, as manifested in the eastern and western rites of the Catholic Church. The dialog presupposes the greater accuracy of Christianity but gives respect to other religions.[16] Less irenic but not virulent, is Cusanus' Cribratio Alchorani, Sifting the Koran, a detailed review of the Koran in Latin translation. While the arguments for the superiority of Christianity are still shown in this book, it also credits Judaism and Islam with sharing in the truth at least partially.[17]

Cusanus' attitude toward the Jews was not always mild, in 1451 he ordered that Jews of Arnhem were to wear a Jew-badge. The De pace fidei mentions the possibility that the Jews might not embrace the larger union of una religio in varietate rituum, but it dismisses them as politically insignificant. This matches the decrees from Cusanus' legation restricting Jewish activities, restrictions later canceled by Pope Nicholas V.[18]