Curva (plural: curve) is an Italian term or name for curved stands of seating located at sports stadiums, particularly in Italy; so named, originally, due to their curved or bending shape. The curva plays an integral part in the culture of Ultras and European football. 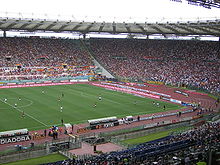 The majority of stands referred to as a "curva" are located behind the goals in their respective stadiums and contain the most vocal supporters within them, often known as Ultras. They are usually curved in shape, in some form whether minor or major, often due to the presence of a running track around the pitch.[1] The Stadio Giuseppe Meazza provides an example of two prominent stands referred to as "curva", "Curva Nord" and "Curva Sud", which contain only minor curves at their corners, while the Stadio Olimpico provides an example of two completely curved stands. A curva may extend from one corner flag to another or be located centrally behind the goal, bordered by two separate corner sections for ticketing or organizational purposes.[2] 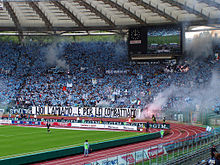 Being home to the most openly passionate supporters in a stadium, the curva is usually the focal point of a club's support. It is often the scene of dramatic choreographed displays of support and occasionally, disapproval for a team or club.[3] These displays often take on an importance of their own, particularly in games involving rivals where both sets of supporters aim to outdo each other.[4] In certain countries, particularly those where sports clubs and supporters are extremely reflective of the local culture, the curva can become quite politicized in nature.[4] Therefore, it's not uncommon for a curva to be split into individual factions or groups, either solely or partially, based on politics, and for one group to hold significant control of the curva and its inhabitants on match days. Ultrà groups within a curva often benefit from this degree of relative uniformity, when there are issues regarding supporters' rights and the commercialization of sports and football in particular.