HRS antennas were invented during the 1920s and 1930s when there was a lot of experimentation with long distance shortwave broadcasting. Before HRS antennas became the default design for high power broadcasting in the 1950s, there were Sterba curtains.

There are multiple feed arrangements for the Sterba curtain arrays, as with HRS type antennas. However, Sterba arrays provide a very limited gain-bandwidth system for the demands of modern shortwave broadcasting systems.

Distributed or Branch Feed curtain arrays are called HR type curtain arrays. The H and R standing for Height and Rows. When they are steerable, they are sometimes called HRS arrays, the S representing "steerable".

An HR 4/3 would be an antenna 4 elements high and 3 elements wide. If it was an HRS 4/3, it would be a steerable array of the same element configuration.

The HR is arbitrary, but may have originated from Horizontal Radiator. The S just means "Slewable", which means that the antenna beam can be directed up to (-/+) 25 degrees horizontally. S can also refer to this antenna type's limited vertical slewability as well. The complete name for this antenna type should be HRRS type antennas, but the extra R for Reversible is seldom used. RCI Sackville may have 2 HRRS type antennas—perhaps the only ones in North America. 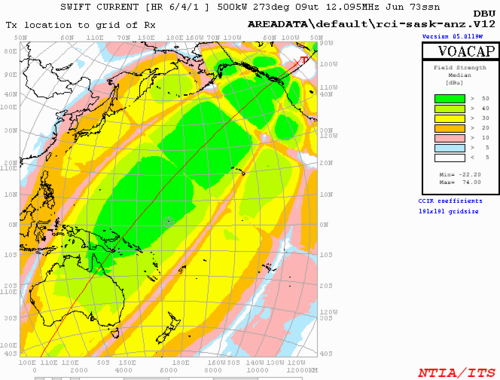 What are HRS type antennas?

The curtain antenna is a dipole array, consisting of rows and columns of dipoles.

How to interpret HRS notation

An HR 4/4/1 antenna has the following characteristics

HRS transmission systems can be "double sided", but in this case HRRS notation is used. The extra R meaning "Reversible". Very few HRRS antenna systems are in use worldwide.

The number of dipole rows and the height of the lowest element above ground determine the elevation angle and consequently the distance to the service area.

Note that it is possible for details of the antenna site to wreak havoc with the designers plans such that takeoff angle and matching may be adversely affected. One amusing incident had the designers struggling to match a new antenna for six weeks. As an identical antenna had worked perfectly at another site they were stumped. Skelton's Aerials SME had to show the designers how to match it and the problem was quickly solved. Sloping ground was to blame.

In the good old days Skelton Transmitting Station had "Ionospheric Sounding Equipment". This comprised a small WW2 radar transmitter (retuned) that could fire 16KW pulses into an HRRS 8 array. There was a transmit-receive switch using thermionic valves. This fed the received signal into a Racal RA17 receiver. The output of the Racal drove a cathode ray tube with a graticule calibrated in distance. One would see "grass" from ground returns out to about 50 miles then it would flatline until the first and second hops were seen. If one was getting a return echo from the correct distance it was a certainty that the signal was reaching its desired location. The equipment blurb described the apparatus as being "Highly useful for assessing reception conditions in a country where it is not convenient to be". Unfortunately the equipment was commandeered by Tatsfield Receiving Station in the 1960s, however without the proper HRRS8 aerial arrays the results would have probably been very poor indeed. (if the antenna gain is halved the return signal reduces to a quarter - this a fundamental truth with radar) 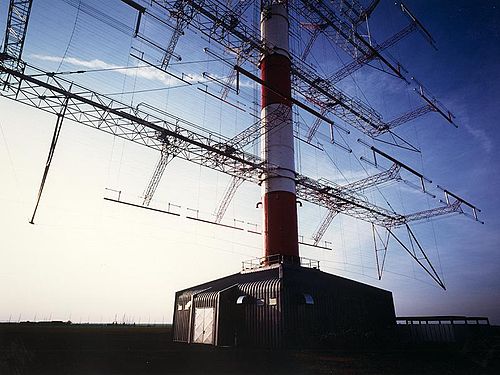 ALLISS antenna as viewed underneath

This is an example of theoretical HRS design shortwave relay stations. This may help one better understand HRS antenna directivity.

A proposal for a Radio Canada International relay station to be constructed in Tofino-Ucluelet found at http://cbc.am/rci-bc.htm

The International broadcasting center of TDF (Télédiffusion de France) is at Issoudun/Ste Aoustrille. Issoudun is currently utilized by TDF for shortwave transmissions. The site uses 12 rotary ALLISS antennas fed by 12 transmitters of 500 kW each to transmit shortwave broadcasts by Radio France International (RFI), along with other broadcast services.

This is an incomplete list of stations using only HRS antennas, sorted by country name.