The San Diego sports curse is a superstition cited for the city of San Diego's inability to claim a modern North American major league professional sports championship (Super Bowl, World Series, Stanley Cup, and NBA Finals). With a population of over one million, San Diego is the largest city in the United States with this distinction.[1] San Diego also has the distinction of having the longest major league championship drought for any city that has at least two major sports franchises, the last title dating back to 1963.[2] The San Diego teams with losing records during their tenure in the city are the Padres (2,886 wins-3,330 losses), the Clippers (186 wins-306 losses), and Rockets (119 wins-209 losses). Only the Chargers, at 375-370-11 through January 3, 2010, have a winning record during their tenure in the city.

The last major league sports championship for San Diego was the AFL Championship in 1963, when the San Diego Chargers emerged as AFL champions before the AFL merged with the NFL to form the current National Football League. In comparison, in Cleveland, another cursed city, the Browns last won an NFL Championship in 1964. Since then, no other team from that city has won a major professional sports championship. The city of Buffalo is also similarly affected by an alleged curse, having last won an AFL Championship in 1965 (incidentally, the Bills defeated the Chargers for both of their AFL titles). In both San Diego's and Buffalo's cases, there is considerable debate as to how Buffalo or San Diego would have fared had the Super Bowl existed by 1963.[3]

The cause of the curse has been debated. One is thought to be the trade of Chargers wide receiver Lance Alworth to the Dallas Cowboys in 1970[4], which is similar to Boston's Curse of the Bambino in that the flip side of the curse was the Cowboys' success after the transaction. Dallas went from being a perennial loser in championship games over the previous five seasons (the Ice Bowl, Super Bowl V) to a team that won the Super Bowl during Alworth's first season there (and has won five Super Bowls overall), gaining the distinction of "America's Team." In contrast, the Chargers never made an appearance in the Super Bowl until the 1994 NFL season, where they were decimated by the San Francisco 49ers in Super Bowl XXIX.

Another explanation for the curse would involve the 1963 AFL champion Chargers. Following the Chargers' 1963 championship, head coach Sid Gillman approached then-NFL Commissioner Pete Rozelle with the idea of having the champions of the AFL and NFL play a single final game (the 1963 NFL champions were the Chicago Bears) but Gillman's idea would not bear fruit until the 1966 season, which today is known as the Super Bowl.[5] In consequence, the Chargers to date have not won the Super Bowl and have only reached it once, in 1994. On the flip side, their AFC West divisional rivals (the Oakland/Los Angeles Raiders, Denver Broncos, and Kansas City Chiefs), once envious of the Chargers' early success, have each won at least one Super Bowl since then (ironically, longtime Raiders owner Al Davis served on the coaching staff of the Chargers from 1960–62). Furthermore, every time San Diego has hosted the Super Bowl, an AFC West rival has represented the AFC (the Broncos in Super Bowl XXII and XXXII – the Broncos winning the latter – and the Raiders in XXXVII).

Other explanations include the uniforms worn by San Diego teams, such as the Chargers' powder blue jerseys (despite being well acclaimed) and the Padres' mustard yellow jerseys,[6] and Qualcomm Stadium (the home stadium of the Chargers and, until 2004, the Padres).

Results of the "curse"

Some of the instances of a curse are listed below, including but not limited to playoff and championship games ending in defeat, controversial calls by officials, and players spurning San Diego teams and going on to win championships. 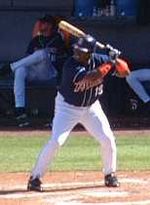 Many famous athletes, such as Major League Baseball Hall of Famer Tony Gwynn (pictured), were unable to win a major league championship during their tenures in San Diego.

Prior to the 2011 World Series, the Padres were the only team in Major League Baseball to win at least two league championships and never win the World Series. They now share that distinction with the Texas Rangers.

The Chargers' overall playoff record, as of 2010[update], stands at ten wins and sixteen losses, a .384 winning percentage. 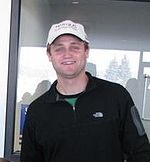 Current Chargers kicker Nate Kaeding (pictured) is considered to be one of the most accurate kickers in the NFL. In the postseason, however, he is 3-for-9 on field goal attempts, which includes game-losing misses, and is often compared to Scott Norwood.[9] 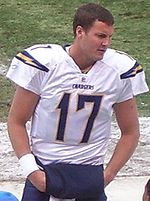 Many San Diego players such as Philip Rivers (pictured) have been labeled "Chokers" for their inability to win a championship, despite their career performances.

Several players on San Diego teams have had untimely deaths.