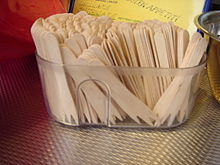 A currywurst fork is a cheap little piece of wood or plastic given away by fast food suppliers with portions of french fries, currywurst, and similar, and used when eating. Currywurst forks are specially designed to keep eaters fingers clean of grease, sauces, mayonaise, and other, while at the same time being cheap enough to be thrown away after use. Thus they spare suppliers the cost and labour of collecting and cleaning traditional forks. This fits well with the image of fast food as kinds of products to be taken away and being consumed elsewhere.

The usual design of currywurst forks has either two or three tips at one end. These are poked into the food, which is later stripped off with the eaters lips. The other end is usually rounded or slim. It is held by the eater. Their length is somewhwere between 7½ and 9 cm, their width between 1 and 1½ cm at the widest place.

They today completely replace an earlier version of currywurst forks from the BeNeLux area which had been cleaned and reused. Whether the throw-away version has been used first in Berlin, Germany, or in the Netherlands is disputed.

In Germany, the local name Pommesgabel of the currywurst fork is a popular alternative denomination for the mano cornuta.