Gonimbrasia belina is a species of moth found in much of Southern Africa, whose large edible caterpillar, the mopani or mopane worm, is an important source of protein for millions of indigenous Southern Africans.

The mopane worm is so called in English because it is usually found on the mopane tree, Colophospermum mopane. Other vernacular names for the caterpillars include:

Moths are large (wingspan 120mm) Wings fawn through shades of green and brown to red, with 2 black and white bands isolating eye spots. Orange eyespot on each hind wing. Larvae are black, peppered with round scales in indistinct alternating whitish green and yellow bands, and armed with short black or reddish spines covered in fine white hairs. Males have feathery antennae. They use them to find a mate. 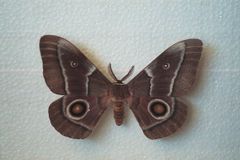 Like most caterpillars, the mopane worm's life cycle starts when it hatches in the summer, after which it proceeds to eat the foliage in its immediate vicinity. As the larva grows, it moults 4 times in its 5 larval stages, after which the mopane worm is considered most desirable for harvesting. Provided that the larva has not been harvested after its fourth moult, it burrows underground to pupate, the stage at which it undergoes complete transformation to become the adult moth. This stage happens over winter, for a duration of 6 to 7 months, whereafter it emerges at the beginning of summer (November or December).

The adult moths live only for three to four days, during which time they seek to mate and lay their eggs.

Like many animals lower down on the food chain, the mopane worms and their eggs often fall prey to various predators as well as disease. Often, more than 40% of a mopane worm's eggs will be attacked by various parasites, and the caterpillars themselves are susceptible to infection from a virus that has a high mortality rate. The worms' main predators are various birds and humans, who rely on the caterpillars for sustenance.

Diet of the mopane worm

Although the mopane worm feeds chiefly on the mopane tree, it is not limited to this diet, and can feed on many other trees indigenous to the same regions, including the leaves of the mango tree. This allows the mopane worm to be scattered over a fairly large area, as it is not restricted to areas with mopane trees. As the larval stage of the mopane worm is fairly short in contrast to other browsing caterpillars, the extensive damage to foliage is easily survived by the tree, in time to be replenished for the next generation of mopane worms. Like most caterpillars, the mopane worm is a voracious eater, and will continue to eat - almost non-stop - until it reaches the next stage of its life cycle, when it burrows underground to undergo metamorphosis.

The mopane worm as food

Mopane worms are hand-picked in the wild, often by women and children. In the bush, the caterpillars are not considered to belong to the landowner (if any), but around a house permission should be sought from the resident. Chavanduka describes women in Zimbabwe tying a piece of bark to particular trees to establish ownership, or moving the young caterpillars to trees nearer home. 4 When the caterpillar has been picked, it is pinched at the tail end to rupture the innards. The picker then squeezes it like a tube of toothpaste or lengthwise like a concertina, and whips it to expel the slimy, green contents of the gut.

The traditional method of preserving mopane worms is to dry them in the sun or smoke them, giving additional flavour. The industrial method is to can the caterpillars (usually in brine), and tins of mopane worms can be found in rural supermarkets and markets around southern Africa.

Dried mopane worms can be eaten raw as a crisp snack, although in Botswana people tend not to eat the head. Alternatively, mopane worms can be soaked to rehydrate, before frying until crunchy or cooking with onion, tomatoes and spices and serving with sadza.5 The flesh is yellow, and the gut may still contain fragments of dried leaf, which is not harmful to humans. The taste is somewhat reminiscent of tea leaves.

As the dried mopane worm has very little flavor and is sometimes compared to eating dried wood, mopane worms are frequently canned/packaged in tomato sauce or chili sauce to enhance the flavor.

Food Network ran a promotional spot in which an American husband and wife visit a remote African tribe which fed them mopane worms, which the husband described as tasting like "honey barbecued chicken." Later, the headman of the village is a guest of the American couple, who serves him honey barbecued chicken; the headman describes it (in his native language, subtitled in English) as tasting "just like mapani [sic] worms."

In the TV show The No. 1 Ladies' Detective Agency, one of the characters is going on surveillance, and is brought bush tea and mopane worms as an alternative to coffee and donuts.

The harvesting and sale of mopane worms is a multi-million rand industry in southern Africa.6 The principal producers are Botswana, Namibia, South Africa (Limpopo Province and Mpumalanga) and Zimbabwe. Typically, the caterpillars are not domesticated, and are picked wherever they occur naturally. It is one of the region's most economically important insects. In the 1990s, hundreds of tons were exported from Botswana and South Africa each year. 7 It is estimated that South Africa alone trades 1.6 million kilogrammes of mopane worm annually, 8 and that Botswana's involvement in this industry nets it roughly $8 million annually. 11 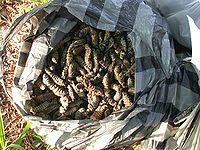 Traditionally, mopane worms were harvested for subsistence. The seasonal nature of the edible caterpillars meant that this was not a year-round food source. However, traditional mopane worm harvesting is evolving to be more commercially-driven.

Since the 1950s, methods used in commercial farming have been applied to the mopane worm harvests, particularly in South Africa. Collectors may organise teams of hundreds of people to hand-pick the caterpillars from the trees, after which they are bagged en masse, weighed and sent off to be processed. Owners of land where mopane worms are found may charge harvesters large fees to enter. Whilst this relationship profits both the commercial harvester and the farmer, it is often to the detriment of the local community for whom the caterpillars may previously have been an important source of food and seasonal income.

As mopane worms represent an important sector in the local rural economy, it attracts large numbers of people who seek to cash in on the profits of selling the insects as food. This leads to overharvesting, and fewer mopane worms the following year. In some areas, farmers and communities have taken steps to reach a balance, so that each year may yield maximum returns without compromising the following year's harvest. 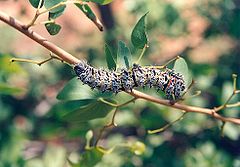 Mopane worm on mopane tree, Botswana. The head of the caterpillar is to the right.

A sure sign of the presence of mopane worms is defoliation of mopane woodland - sometimes around 90 percent of leaves.8 Fenced-in browsing animals may rely on the mopane, and other trees favoured by the caterpillars, as an important part of their diet. Some farmers therefore view the mopane worm as competition for their livestock, and attempt to eradicate the "pest" with insecticides and the like. However, the caterpillar season is short, and the trees sprout the new, tender foliage which browsers prefer, so this problem can be managed in other ways: in particular, by working to mutual benefit with the local caterpillar harvesters.9

Some areas once rich in mopane worms are now barren due to over-harvesting and lack of a proper sustainable approach to commercial mopane worm farming. Suggestions of how to reintroduce the worms to these areas include recolonisation. As the adult moth lives only three to four days, during which it must mate and lay eggs, there is only a small window of opportunity to relocate them. If this stage were successfully completed, collaboration with local farmers and communities would be required to ensure the caterpillars were not harvested for a set number of years. This would allow it to adequately repopulate the area, to create a sustainable harvest in the future.

Those in the business have considered domesticating the mopane worms in a manner similar to silkworms. This would allow the industry to be less susceptible to the pitfalls associated with it, such as climatic change, drought and other factors that could compromise a harvest. For a domesticated industry to succeed on a small scale and be accessible to the poorest of the poor, the cost of production would have to be comparable with the cost of wild worms or dried worms at the market.