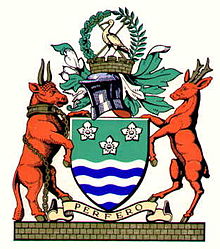 Cumberland County Council was the county council of Cumberland in the North West of England, an elected local government body responsible for most local services in the county. It was established in 1889 as a result of the Local Government Act 1888. Carlisle was initially within its area but became a separate county borough in 1914. In 1974, both authorities were merged into the new Cumbria County Council for the county of Cumbria.

County Councils were first introduced in England and Wales with full powers from 22 September 1889 as a result of the Local Government Act 1888, taking over administrative functions until then carried out by the unelected Quarter Sessions.[1] The areas they covered were termed administrative counties and were not in all cases identical to the ancient counties, but in Cumberland the whole county initially came under the authority of the council.

The first elections to the new county council were held in January 1889. Following them, James Lowther asked a question in the House of Commons about the alleged refusal of the county council to make regulations for the inspection of marked registers.[2] 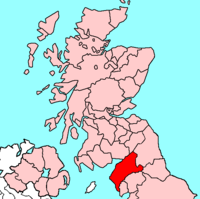 Area covered by the council (1889—1914) before Carlisle was excluded

The new system of local democracy was a significant development and reflected the increasing range of functions carried out by local government in late Victorian Britain. Schools (both primary and secondary) were added to the County Council's responsibilities in 1902.

Throughout its existence, Cumberland County Council was responsible for the more strategic local services of Cumberland. By the time it was merged into Cumbria, it provided a wide range of services, including education (schools, libraries and youth services), social services, highway maintenance, waste disposal, emergency planning, consumer protection and town and country planning for matters to do with minerals, waste, highways and education. This made it a substantial employer.

There was a changing pattern of lower-tier authorities existing alongside the county and responsible for other more local services. The Local Government Act 1894 reconstituted the existing sanitary districts as urban districts and rural districts, each with an elected council. The Local Government Act 1929 forced county councils to review the districts within their areas to form more efficient units of local government. In Cumberland, where a review was carried out in 1934, this meant merging the districts.

The 1888 Local Government Act allowed any municipal borough with a population of 50,000 to become a county borough, taking over all functions of the county council. In 1914, Carlisle gained this status and left the administrative county, while remaining within the geographic county of Cumberland for the purposes of the Lieutenancy and the shrievalty.[3]

In 1974, under the Local Government Act 1972, both the administrative county of Cumberland and the county borough of Carlisle were abolished. The areas they covered were combined with Westmorland, parts of Lancashire and parts of the West Riding of Yorkshire to form a new county called Cumbria. The area which had been Cumberland was divided at the next district tier into the City of Carlisle, Allerdale, Copeland and part of Eden.[4]

The council's final major road scheme, an A66 bypass for Keswick, was prepared by Scott Wilson Kirkpatrick, consulting engineers, in 1972,[5] and construction began in the summer of 1974, with the new Cumbria authority completing the scheme.[6]

From 1889 to 1969, members were elected for a three-year term of office, later a four-year term, with elections held all together on the "first past the post" system. All of the county's electoral divisions elected a single member, and the elected members chose aldermen, whose term of office was for six years, who were additional voting members of the authority.