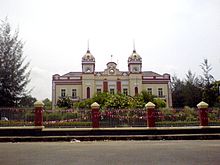 The colonial building, which houses Trichur Public Library and also Thrissur Town Hall, is one of the oldest buildings in Thrissur, which was built in 1873

pronunciation (help·info) (Malayalam: തൃശൂര്‍) formerly known as Trichur, is a city in the Kerala state of India. It is the headquarters of the Thrissur District. It is known as the 'Cultural Capital of Kerala'. The culture of the city can be termed as predominantly South Indian. Residents of Thrissur are known as Thrissurian; they are an important part of the South Indian weltanschauung. Thrissur, the cradle of culture of Kerala is decorated with Vadakkunnathan Temple, from where the name derived. The old name was 'Thrishivaperur' means the place with Three Siva's or Siva Temples. The Thrissur Pooram, celebrated during April-May is top on the list of cultural attraction of South India.

Thrissur is referred to as the cultural nerve center of the state of Kerala. Representing the rich cultural heritage and traditional legacy of the state of Kerala, Thrissur houses several literary and cultural societies that impart training in performing arts of the region. Thrissur celebrates numerous religious and social festivals with much pomp and glory. Onam, Pooram and Pulikkali are some of the prominent festivals of the local population of Thrissur. The unique culture of the beautiful place of Thrissur is reflected through the various festivities of the place. During the Onam festival, the artists of Thrissur perform the traditional dance of Kathakali. The cultural hub of Kerala, Thrissur maintains a harmonious balance between traditional arts and modern values.[1]Thrissur is widely acclaimed as the land of elephant lovers. 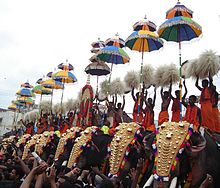 A formation of gold-caparisoned elephants at the Thrissur Pooram. Poorams are Hindu Temple-centered festivals popular among both Keralites and tourists.

The world-renowned Thrissur Pooram, arguably called the 'pooram of all poorams' is celebrated in Thrissur city of Kerala. Celebrated in the Malayalam calendar of Medom (April-May) in every year, it consists of processions of richly caparisoned elephants from various neigbouring temples to the Vadakkunnathan Temple, Thrissur. The most impressions are those from the Thiruvambadi Sri Krishna Temple and the Devi temple at Paramekkavu. Pooram is an assemblage of suburban deities before the presiding deity at the Siva temple in down town Thrissur. The Pooram celebration is held at the Thekkinkadu Maidan.

Since the word pooram literally means a group or a meeting, it was believed that every year the dynastic gods and goddesses of neighbouring province met together for a day of celebration. This usually happened on the pooram asterism of one of the spring months. The gods and their entourage arrived for the meeting on colourfully decorated tuskers. Even today, the converging of these divine processions at the festival venue is an awe inspiring sight. The pooram draws to a close with mind-blowing fireworks displays in the evening and in the wee hours of the next morning.

The Pooram festival is also well-known for the magnificent display of fireworks. It is celebrated by two rival groups representing the two divisions of Paramekkavu and Thiruvambadi Sri Krishna Temple vying with each other in making the display of fireworks grander and more colourful. Each group is allowed to display a maximum of fifteen elephants and all efforts are made by each party to secure the best elephants in South India and the most artistic parasols, several kind which are raised on the elephants during the display. The commissioning of elephants and parasols is done in the utmost secrecy by each party to excel the other. Commencing in the early hours of the morning, the celebrations last till the break of dawn, the next day.

Of the rival groups participating in the Pooram, the most important ones are those from Pramekkavu and Thiruvambadi. At the close of the Pooram both these groups enter the temple through the western gate and come out through the southern gate to array themselves, face to face, one from the round and other form the Municipal Office road. This spectacle is highly enchanting. Although this grand festival is known as Thrissur Pooram, it is in fact the conclusion of the eight -day Utsavam of nine temples. The procession of the Thiruvambadi to the grounds of Vadakkunnathan Temple and back is not only important, but also quite enlivening. The marvelous as well as magical effect of the Panchavadyam, a combination of five percussion and wind instruments, is to be felt and enjoyed.

Thousands of people from all walks of life gather at the Thekinkadu Maidanam at Thrissur to celebrate the pooram or festival. The festival highlights include among other things a spectacular pageant of 30 caparisoned elephants and Kudamattom, a competition in the swift rhythmic changing of brightly coloured and sequined parasols. Dazzling fireworks, and a variety of musical performances including the Chendamelam and the indispensable Panchavadyam are also conducted. The Thrissur Pooram, arguably the most famous festival of Kerala, is a heady mixture of pomp and pageantry. 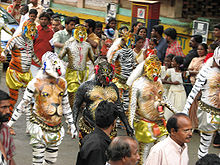 Swaraj Round, Thrissur is the place to watch Puli Kali in Kerala

Puli Kali also known as Kaduvakali is a colorful recreational folk art from Thrissur. It is performed by trained artists to entertain people on the occasion of Onam, an annual harvest festival, celebrated mainly in Kerala. On the fourth day of Onam celebrations (Nalaam Onam), performers painted like tigers and hunters in bright yellow, red, and black dance to the beats of instruments like Udukku and Thakil. Literal meaning of Pulikali is the 'play of the tigers' hence the performance revolve around the theme of tiger hunting.

On the fourth day of Onam, the Pulikkali groups or 'sangams' as they are called, from all four corners of Thrissur move in a procession, dancing, pouncing and shaking their bellies to the beat of the drums through the streets to the Swaraj Round, Thrissur situated in the heart of the city. Scenes such as the tiger preying on an animal, and a tiger being hunted by a game-hunter are enacted beautifully in between. Thousands of spectators line the streets enjoying the dance, cheering the dancers some of them even trying to join in.

The groups assemble at Naduvilal in the Swaraj Round, Thrissur in front of the Vadakkunnathan Temple and offer a coconut each to the deity of the Ganapati shrine (Naduvilal Ganapati Kovil) here, before going on a procession around the ground. The procession also include floats from each village. The different troupes vie with each other to make the best floats as well as the best dressed tigers.

A striking feature of this folk art is the colorful appearance of the performers. A particular combination of tempera powder and varnish or enamel is used to make the paint. First of all, the dancers remove the hair from the body, and then, the base coat of paint is applied on them. It takes two to three hours for the coating to dry. After that, the second coat of paint is applied with enhanced design. This entire procedure takes at least five to seven hours. A large number of artists gather to apply paint on the tigers. It is a meticulous process and often starts from the wee hours in the morning.

Vellayappams from Thrissur is world famous

The cuisine of Thrissur is linked to its history, geography, demography and culture of the land. Mainly Rice is the staple food of the people in Thrissur. Typically, Thrissur Hindus are not vegetarians, though some individual members may avoid non-vegetarians. Muslims and Christians, that are predominantly non-vegetarians use fish, poultry and meat. The routine dietary in a family consists of breakfast, lunch, tiffin and supper. Kanji or Rice gruel with some vegetable curry and pickles formed the main breakfast until very recently in almost all families, but it has now been replaced by tea, coffee or other beverages taken along with dishes like Dosai, Iddali, Poori, Chappathi and Uppuma. Fish is an important item in the diet of about 90% of the population. Tapioca is another vegetable used by poor and the middle class. The reason for the large scale consumption of tapioca is attribute to its high calorific value. Grated coconut and coconut milk are widely used in dishes and curries as a thickener and flavouring ingredient in Thrissur. Black pepper, cardamom, cloves, ginger, and cinnamon play a large part in Thrissur's food habits. 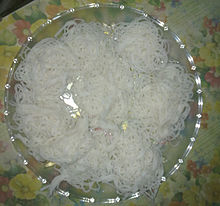 Idiyappams is one of the breakfast dishes in Thrissur

Achappam and Kuzhalappam are the most popular snack that you come across in Thrissur Christian families. These snacks are mostly served in the time of Christmas or church festivals in Thrissur. Achu means 'mould' and appam means something made with rice flour which is deep fried or steam cooked. Achappam are made using intricately designed irons. The iron is heated to a very high temperature in oil, dipped into the batter, then re-immersed in the hot oil to create a crisp shell around the metal. The iron is immediately removed and the achappam is separated from the iron. Usually, the edges of the achappam are dipped into frosting or sugar. Vellayappams are the other dish which Thrissur is adored for. Many small houses near Basilica of Our Lady of Dolours specilizes in selling fresh Vellayappams.

Witness world-renowned Thrissur Pooram, arguably the most famous festival of Kerala and is called the 'Pooram of all Poorams'. The festival is held in the premises of the Vadakkumnatha temple, a classic example of the Kerala style of architecture. The festival highlights include, among other things, a spectacular pageant of 30 caparisoned elephants and Kudamattom, a competition in the swift rhythmic changing of brightly coloured and sequined parasols.

Dress like Big Cat to attend Puli Kali, on the fourth day of Onam, where Puli Kali troupes from all over the district assemble to display their skills.

Take a stroll in Thekkinkadu Maidan, which seats the Vadakkumnathan temple and host the spectacular cultural festival Thrissur Pooram, which is considered the 'Mother of all Poorams in Kerala. 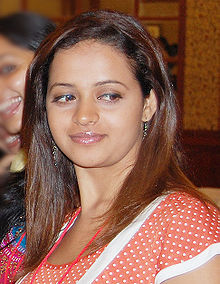 Bhavana Menon, one of the most recognised faces in South Indian film industry is a native of Thrissur

The Bible Tower, is the tallest church tower in Asia. It can be seen from anywhere in the Thrissur city.

Considered as the Gold Capital of India, gold ornament are widely sold.

Ride an elephant in Thekkinkadu Maidan, widely acclaimed as the land of elephant lovers.

Sip a cup of coffe at Indian Coffee House in Thrissur Round, one of culture mascots of Kerala.

One of the contributions of Thrissur to the world of economics. Recognised by RBI as 'Banking town, Thrissur houses the headquarters of three banks.

Thrissur has many century old tradition in drug manufacturing and treatment.

Thrissur is a treasure of temples and churches