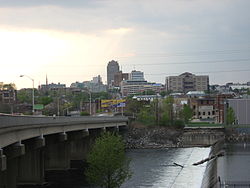 The culture of Allentown dates back to its settlement in the 18th century. Religious groups, such as the Moravians, wanted to escape persecution in Europe and settle in the newly-discovered land. Lenape Native Americans occupied the Lehigh Valley area. 19th and 20th century immigrants include Germans, Italians, Asians, and more recently, Hispanics, and African Americans. The city's culture is based on the diverse population that lives there.

Main articles: Demographics of Allentown, Pennsylvania and List of people from the Lehigh Valley

Before the first European settlers arrived, the region that would become Philadelphia was inhabited by the Lenape, a Native American people. Mennonites, Amish, Moravians and Pietists moved to the state during the 17th century, because of Pennsylvania's freedom of religion. A century later, in the 19th century, many Catholics moved to the area from Germany and Ireland. The Roman Catholic Diocese of Allentown is the head of all the Catholic churches in Allentown and the surrounding area.

In the 20th and 21st centuries, Hispanic and African American groups moved from the South into Northeast cities. In the last 10 years, many of these people have moved from New York City and Philadelphia to Allentown and Reading. 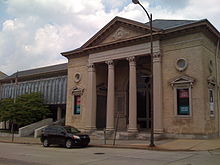 The Allentown Art Museum in Allentown

Allentown has some public art scattered around the city. A monument honoring war veterans is located in the middle of Hamilton and 7th Streets in Center City. Graffiti once commonplace throughout the city, has been virtually eliminated through an anti-graffiti program administered through the city. In an effort to eliminate graffiti, the city has painted murals in some of its city parks and high graffiti locations, given out rewards for turning in people who deface buildings with graffiti and arrested graffiti artists.

Allentown has a large radio market boasting many genres of music.

Allentown's reputation as a rugged blue collar city has led to many references to the city in popular culture:

Allentown does not have much influence on film and television, but neighboring Bethlehem holds an annual film festival, The SouthSide Film Festival. Allentown receives most of its television from Philadelphia and New York City, but Channel 69, WFMZ-TV, covers local and regional news.

Allentown is influenced by cuisine from the Pennsylvania Dutch, Hispanic and Latinos, and Philadelphia. Allentown has a local variant of the Philly cheesesteak, and local pizza parlors. Pennsylvania Dutch foods like head cheese, liver pudding, sous, chow-chow, apple butter, and others are available at some diners across the region. Ethnic food types represented include Dominican, Puerto Rican, West Indian, Japanese, Italian, Lebanese and Syrian. Fast food and restaurant chains have established a presence in the Lehigh Valley due to the growing population. A regionally-famous hot dog chain, Yocco's Hot Dogs, maintains several restaurants in the city.

Philadelphia Eagles' training camp[3] is held annually in Bethlehem. The Lehigh Valley Spring Home Show and the Lehigh Valley Auto Show[4] are held at Stabler Arena in Center Valley. The AAA minor league affiliate of the Philadelphia Phillies, the Lehigh Valley IronPigs, plays its home games from the beginning of April through the end of September each year at Coca-Cola Park in Allentown.

Allentown is home to these museums:

Main article: List of shopping malls in the Lehigh Valley

The Allentown area is home to many shopping areas and a few indoor malls. Many national stores can be found here as well as regional chains.