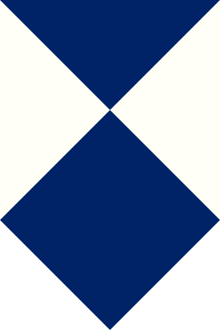 Emblem of the Hague Convention of 1954, used for the Swiss "A listed" buildings.

Cultural heritage protection in Switzerland, or Kulturgüterschutz, or Protection des biens culturels, or Protezione dei beni culturali, refers to all measures for the protection of cultural heritage in Switzerland from damage, destruction, theft and loss. This protection at the national level is for National Heritage Sites that are designated as monumental importance and is based on a set of laws that were adopted by reason of international agreements.

In the Cantons of Switzerland, points of contact are responsible for cultural heritage protection. These are usually the cantonal culture department which is mostly for historic preservation. The conservation agencies bring the know-how in dealing with the objects in cooperation with the civil defense personnel, whose resources are used at the local and regional level. In addition to these, with the protection of cultural property authorities responsible for it are numerous other institutions and partners, which contribute to the preservation of cultural heritage: the cultural institutions (archives, museums, libraries) themselves, the partner organizations in population protection (fire, police, etc.) or private organizations such as the Swiss Society for Protection of Cultural Property.

Threats to cultural property can be divided into three categories: constant threats, events in peacetime as well as events in the event of armed conflict. Permanent hazards include, among other things, theft , vandalism , pollution , parasites or fungi, decay of old age, ignorance or indifference. An example of this category is the danger of fire to the Kapellbrücke in Lucerne since the fire in August 1993. It is believed that the fire was caused by a discarded cigarette. You can meet these threats primarily with conservation measures and by raising public awareness for the correct handling of cultural heritage. As an example of natural hazards, the flood events of summer 2005 affected the collection of objects in the Swiss Transport Museum in Lucerne or the Benedictine monastery "Kloster St. Andreas in Sarnen. Since Switzerland has largely been spared from armed conflict, the protection of cultural property currently focuses mainly on technical measures against hazards and natural disasters.

The current "Swiss Inventory of Cultural Property of National and Regional Significance" was approved in 2009. The objects included were individual buildings, and archaeological collections (collections from museums, archives and libraries), which were reviewed and evaluated according to uniform criteria. The inventory can be viewed both as a printed publication as well as geographic information system (GIS) on the Internet. In addition, various inventories exist under Article 5 of the Federal Law on the Natural and Cultural Heritage (NHG), which should be listed here as cross-references to the Protection of Cultural Property: The Inventory of Heritage Sites in Switzerland (ISOS), the inventory of historic routes in Switzerland (IVS ) and the Federal Inventory of Landscapes and Natural Monuments of National Importance (BLN).