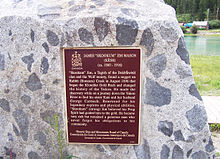 Amongst the many to take part in the gold rush was writer Jack London, whose books White Fang, The Call of the Wild, and To Build a Fire, a collection of short stories, were influenced by his northern experiences. London was inspired to write stories by various adventurers he met. The Thousand Dozen for instance was inspired by a brief market corner on eggs created by "Swiftwater" Bill Gates. Part I of Jack London's 1910 novel Burning Daylight is centered on the Klondike Gold Rush. Another literary luminary connected with the rush, and whose cabin still stands in Dawson City, was folk-lyricist Robert W. Service, whose short epics The Shooting of Dan McGrew and other works describe the fierce grandeur of the north and the survival ethic and gold fever of men and women in the frozen, gold-strewn north. Service's best-known line is the opening of The Cremation of Sam McGee, which goes;

There are strange things done in the midnight sun
By the men who moil for gold;

One of the last books of Jules Verne, Le Volcan d'Or (The Volcano of Gold), deals with the terrible hardships endured by the gold-seekers in the Klondike. The book was written circa 1899 but was not published until 1989.[1] 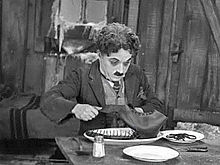 Charlie Chaplin carving up a boot in The Gold Rush

The 1997 book "Jason's Gold" by Will Hobbs (not published until 1999) was about a boy who went to Klondike in search for gold and his experience there.[2] also jasons gold is a very good book and you should atempt to read it.

Charlie Chaplin's silent film The Gold Rush (1925), the highest grossing silent comedy, was set in the Klondike, as was the silent epic The Trail of '98 (1928) and Mae West's Klondike Annie (1936). A silent-era film by Russian director Lev Kuleshov By the Law (1926), based on Jack London's story "The Unexpected" also dramatizes the life of the gold-seekers.

Life in Dawson City during the gold rush was also the subject of the award-winning 1957 National Film Board of Canada (NFB) documentary City of Gold, narrated by Pierre Berton.

James Stewart's 1955 movie The Far Country is a Western set in Skagway and Dawson City during the gold rush era. It was directed by Anthony Mann and written by Borden Chase. The 1978 TV special What a Nightmare, Charlie Brown! is also set during the Gold Rush but is disputed to be the 1925 serum run to Nome.

The Klondyke march and two step with music by Oscar Telgmann was published in Kingston, Ontario by the Music Emporium, c. 1897.[3] Dawson City was also the starting place of impresario Alexander Pantages. He opened a small theater to entertain the miners. He also became the partner and lover of "Klondike Kate" Rockwell. Soon, however, his activities expanded and he became one of America's greatest theater and movie tycoons.

Carl Barks' 1950s Scrooge McDuck comics established the character as a successful participant in the Klondike rush when he was young, around the turn of the century. While Barks was content with leaving Scrooge's backstory of his Klondike days at the level of short flashbacks, his successor Don Rosa has gone to extend Barks's legacy of short glimpses into Scrooge's gold rush exploits into a number of adventure stories, particularly Last Sled to Dawson and individual chapters of his opus magnum The Life and Times of Scrooge McDuck, which are chapter 8a: King of the Klondike, chapter 8b: The Prisoner of White Agony Creek, and chapter 8c: Hearts of the Yukon.

Lefty Frizzell's 1964 song "Saginaw, Michigan" tells the tale of a poor fisherman who feigns the discovery of Klondike gold in a plot to remove the hostile father of the woman he loves.

A game called The Yukon Trail was created by MECC in 1994. There is also a populaire solitaire called Klondike.

In addition, the Klondike gold rush proved to be one of most famous eras of the Royal Canadian Mounted Police's history. Not only did the exemplary conduct of the force ensure its continuation at a time when its dissolution was being debated in the Parliament of Canada, but the Force's depiction in popular western culture is often set at this time. The most popular examples include dramatic depictions such as the radio series Challenge of the Yukon and comedic ones like Dudley Do-Right.

A certain amount of slang came out of the gold rush. Experienced miners were often known as Sourdoughs.[4] Potential miners new to the Klondike were known as Cheechakos, from Chinook Jargon.[5] These two names live on in Dawson City, in tourist literature, and enjoy occasional usage by miners still working the tributaries of the Yukon River and Klondike River as well as in literature relating to the Klondike gold rush era.

The gold rush was celebrated in the city of Edmonton, Alberta, with Klondike Days (now Edmonton's Capital EX), an annual summer fair with a Klondike gold rush theme. Although far away from Dawson City and the Klondike River, Edmonton became known as a "Gateway to the North" for gold prospectors en route to Canada's North. It was in the city that many would collect the necessary goods for trekking up north in search of wealth. Individuals and teams of explorers arrived in Edmonton and prepared for travel by foot, York boat, dog team, or horses. Travel to the Yukon over land via what was sometimes called the "all Canada" route—and the prospectors that took this route—were often referred to as "overlanders". Few overlanders made it to the Klondike (160 out of about 1,600 that started[6]).

Alberta's Northlands Association, which is based in Edmonton, honoured the memory and spirit of the overlanders with Klondike Days. For many years, Klondike Days was a fun summer exhibition with themed events such as the Sunday Promenade, the Sourdough raft race, free pancake breakfasts, saloons, gold panning and era costume parties. Despite the many sad realities of the gold rush, Edmonton appreciated the Klondike spirit, which was characterised by a tenacious hope for success in the face of hardship, and an energetic zest for life. As a fair theme it was meant to provide the impetus for fun fantasy characters (e.g., Klondike Mike (Bobby Breen), Klondike Kate, The Klondike Kid (Ken Armstrong), Klondike Kitty (Debra Cook), Klondike Kattie to mention but a few) and fun events celebrating an interesting time. Many in the Yukon resented Edmonton's Klondike celebrations because of their historical inaccuracy and the perceived competition with the Yukon's tourism. The sentimental aspect of the gold rush lost its popular appeal in the 1980s and 90s and in 2003 the theme was dropped.

In addition, every other summer, on odd numbered years, the sleep away camp Camp Shohola for Boys has what it calls Klondike Day. In the morning an area of camp, including the creek that runs through the camp, are staged as Dawson City and campers run into the creek to search for "gold." In the afternoon they receive "money" for their prospecting and attend a camp wide carnival.