German nationalism (German: Deutschnationalismus) is a political ideology and a current in Austrian politics. It has its origins in the German National Movement of the 19th century, a nationalist movement of the German-speaking population in the Austro-Hungarian Empire and had strived for a closer connection of the German-speaking Austrians to Germany, or even the link-up ("Anschluss") to a Greater Germany. During the Habsburg monarchy, the First and the Second Austrian Republic, several political parties and clubs have adhered to German nationalism. The national liberal and German national parties have been termed as the Third Camp ("Drittes Lager"), as it has traditionally been the third force in Austrian politics, next to Catholic conservatives and socialists.[1][2] Nowadays, German nationalism is represented in the Freedom Party of Austria.[3]

In the Habsburg Monarchy

In the conflict of nationalities in nineteenth century's Austro-Hungarian monarchy, the German National Movement (Deutschnationale Bewegung) advocated Greater German, anti-semitic, and anti-clerical tendencies. Since the Revolutions of 1848/49, the different ethnic groups in the Habsburg Monarchy, namely the Czechs in Bohemia, demanded political, economic, and cultural equality with the German-speaking population that benefitted from privileges dating back to the times of Empress Maria Theresa, and Emperor Joseph II. Therefore, the Austro-Hungarian Empire was characterized by the nationalities' conflicts from the 1870s until the demise of the Empire in 1918. After the Prussian victory in the battle of Königgrätz (1866), the German-speaking Austrians felt squeezed out of Germany, and feared to be demoted to just one of the several ethnic groups in the multinational Danube Monarchy.[4] The conflicts between German and Czech populations intensed, when in 1879 minister-president Eduard Taaffe formed a government of Cisleithania (Austrian half of the Austro-Hungarian Empire) without the participation of the German-Liberal Party (Deutschliberale Partei). This national liberal party had been the main representative of the German-speaking bourgeoisie. Thereupon, the more radical German National Movement accused the German-Liberal Party of not representing the German's rights sufficiently. 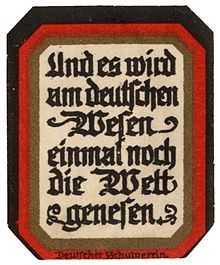 "And the German spirit once will heal the world.", propagandistic stamp of the Deutscher Schulverein.

In 1880, the "German Schools Society" (Deutscher Schulverein) was formed as a protection association in regions with a German-speaking minority. Reacting to an Austro-Hungarian languages act, the society promoted the establishment of German schools in communities where public means would not fund a school for the children of the German-speaking population. 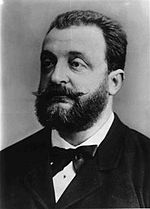 In 1882, different German national groups and intellectuals published the Linz Program which demanded a fixation of the German predominance and the complete Germanization of the Habsburg Empire. The manifesto was signed by the radical German nationalist and anti-semite Georg von Schönerer, as well as Vienna's populist mayor Karl Lueger, who also was a staunch anti-semite, but loyal to the Catholic Church and the Habsburg dynasty, and the Jewish social democrat Victor Adler.[5] The heterogenous group of signatories of the Linz program quickly drifted apart, when Schönerer revised the program and added an "Aryan paragraph" in 1885.[6]

Schönerer founded the German National Society, and later, in 1891 the Pan-German Society, demanding the accession of all German-speaking territories of the Danube Monarchy to the German Empire, and decidedly rejecting Austrian patriotism. His radical and racist German nationalism was especially popular among well-educated, acedemic circles: professors, grammar school teachers, and students. School administrations reacted with, unsuccessfully, imposing Austrian patriotism and emperor cult. Vienna's mayor Karl Lueger even tried to dismiss all "Schönerians" from the teaching service – without success.[7] The German Club, on the other hand, accepted the Habsburg dynasty and the sovereignty of Austria. The majority of German nationalists and national liberals adhered to this more moderate current.

From the 1880s on, the German national camp was fragmented into several splinter parties and factions. The most radical among them was the German Workers' Party, formed in 1903, that later transformed into the Austrian wing of the German National Socialist Workers' Party. After the 1911 elections for the Austrian Imperial Council, the German National Association formed the largest parliamentarian group. At the end of First World War, it disintegrated again into its seventeen components.

In the First Austrian Republic (1919-1934), the German nationalists were represented in the Greater German People's Party and the agrarian Landbund.[8][9] Initially relatively influential, the two groupings rapidly lost their shares of the votes to the Christian Socials and the Socialists, that both accepted the interdiction of linking up with Germany by the Treaty of Saint Germain. The German national idea of the "Anschluss" to a Greater Germany was incorporated by the Austrian National Socialists that decended from the German national camp.[10] In 1933, Nazis and Greater Germanists formed an action group.

The Nazis firmly fought the austrofascist regime of chancellors Engelbert Dollfuss, who was assassinated by the Nazis, and Kurt Schuschnigg. Their Fatherland Front defended the independence of Austria with protection of Mussolini's Italy, while the Nazis strived for a quick link-up with Hitler's Germany. With Hitler's annexing of Austria in 1938, and its unification (Anschluss) to the Greater German Empire, the historical aim of the German national movement was achieved.[5] The German national camp was practically absorbed into the Nazi Party (NSDAP).[11]

During the Second Republic and Recent Development

After the end of the Second World War, the German national current was initially discredited for its links to the Nazi regime.[11] The dominant parties of the new republic were the Christian conservative Austrian People's Party, and the Socialist Party, both promoted Austrian independence and considered the Greater German idea to be ultimately of the past. Moreover, all former members of the Nazi party were banned from any political activity, they were even disenfranchised.[12] However, the German national and national liberal camp was revived, in form of the Federation of Independents (Verband der Unabhängigen), which also fought the De-nazification laws and represented the interests of former Nazis, Wehrmacht, and SS soldiers. In 1956, it was transformed into the Freedom Party of Austria. In the 1950s and 1960s, the German national camp, represented by the affiliated organisations of the Freedom Party, were very active at the universities, where the Burschenschaften (duelling fraternities) spread their German national and liberal ideology. Inside the Freedom Party, the liberal wing grew stronger and gradually Austrian patriotism was incorparated in the party's ideology.[11][13] During Norbert Steger's party leadership from 1980-1986 and the Freedom Party's participation in a coalition government with the Social Democrats, the German national faction was weakened.[14]

By contrast, Jörg Haider's takeover of the party leadership in 1986, was considered a triumph of the German national factions.[13][14] However, Haider's right-wing populism did not stress the German national origins, as the connection to Germany is not an issue with which elections can be won. No more than 17 percent of the Freedom Party's voters question the existence of an Austrian nation[15] and only 6 percent of all Austrians identify themselves as "Germans".[16] The German nationalistic influence could still be seen in the hostile position towards Austria's Slavic minorities, as the Carinthian Slovenes in the conflict over bilingual town signs, rejection of immigration and European integration.[11] Nowadays, the German national wing is only a minor faction inside the Freedom Party. German nationalists, including Andreas Mölzer,[17] and Martin Graf,[18] now refer to themselves as "cultural Germans" (Kulturdeutsche), and stress the identity of Austrians as ethnical Germans in contrast to a distinct Austrian identity.