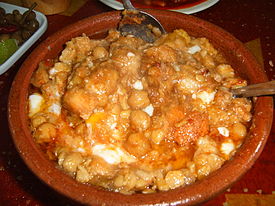 Lablabi is a thick soup made with chickpeas and garlic

Tunisian cuisine, the cuisine of Tunisia, is a blend of Mediterranean and desert dwellers' culinary traditions. Its distinctive spicy fieriness comes from neighbouring Mediterranean countries and the many civilizations which have ruled the land now known as Tunisia: Phoenicians, Romans, Arabs, Turkish, French, and the native Berber people. Many of the cooking styles and utensils began to take shape when the ancient tribes were nomads. Nomadic people were limited in their cooking implements by what pots and pans they could carry with them. A tagine, for example, is actually the name for a pot with a conical lid, although today the same word is applied to what is cooked in it.

Like all countries in the Mediterranean basin, Tunisia offers a "sun cuisine," based mainly on olive oil, spices, tomatoes, seafood and meat (primarily lamb). 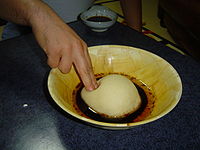 Asida is an Arab dish made up of a cooked wheat flour lump of dough, sometimes with added butter or honey 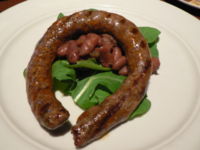 Merguez is a red, spicy mutton or beef-based fresh sausage 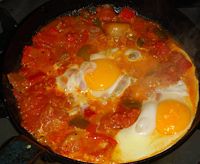 Egg shakshouka made in Tunisia

Unlike other North African cuisine, Tunisian food is quite spicy. A popular condiment and ingredient which is used extensively in Tunisian cooking, harissa, is a hot red pepper sauce made of red chili peppers and garlic, flavoured with coriander, cumin, olive oil and often tomatoes. There is an old wives' tale that says a husband can judge his wife's affections by the amount of hot peppers she uses when preparing his food. If the food becomes bland then a man may believe that his wife no longer loves him. However when the food is prepared for guests the hot peppers are often toned down to suit the possibly more delicate palate of the visitor. Like harissa or chili peppers, the tomato is also an ingredient integral to the cuisine of Tunisia. Tuna, eggs, olives and various varieties of pasta, cereals, herbs and spices are also ingredients which feature prominently in Tunisian cooking.

Tabil, pronounced "table" is a word in Tunisian Arabic meaning "seasoning " (similar to 'adobo' in Spanish) and now refers to a particular Tunisian spice mix, although earlier it only meant ground coriander. Paula Wolfert makes the plausible claim that tabil is one of the spice mixes brought to Tunisia by Muslims coming from Andalusia in 1492 after the fall of Granada. Today, tabil, closely associated with the cooking of Tunisia, features garlic, cayenne pepper, caraway seeds and coriander pounded in a mortar, then dried in the sun. It is often used in cooking beef, veal and game.

Thanks to its long coastline and numerous fishing ports, Tunisia offers an abundant and varied selection of fish. Most diners in Tunisia are also content to have their fish fillet simply fire-grilled and seasoned with olive oil, a lemon squeeze and salt and pepper to taste. Fish can also be baked, fried in olive oil, stuffed, seasoned with cumin (kamoun). Squid, cuttle fish, and octopus are served in hot crispy batter with slices of lemon, in a cooked salad, or stuffed and served with couscous.

Although Tunisians do consume dairy products such as milk (hlib), buttermilk (lban), yoghurt (yaghurt) and soft cheeses (jban), these dairy products are never used as ingredients in national dishes.

Tunisia has different regional aspects. Tunisian cuisine varies from north to south, from the coast to the Atlas Mountains, from urban areas to the countryside, and along religious affiliations.

For instance, the original inhabitants of Tunis (the Beldiya), do not use harissa much; they prefer milder food, and have also developed their own breads and desserts. Their dominant culinary influences are French and Italian and their diet evolves around beef, turkey and chicken.[citation needed]

Closer to the Atlas mountain range, game is favoured. A diet may be composed of quail, pigeons, squads, partridge, rabbits and hare. In the Cap Bon, people enjoy tuna, anchovies, sardines, sea bass and mackerels. On the island of Djerba, where there is a dense Sephardic population, only Kosher foodstuffs are consumed. In Hammammet, snails are enjoyed. Organs are traditionally staples of Tunisian cooking, such as tripe, lamb brains, beef liver and fish heads. 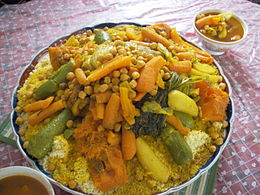 Couscous with vegetables and chickpeas

Couscous, the national dish of Tunisia, can be prepared in many ways, and is considered by Tunisian people to be the best couscous of North Africa. It is cooked in a special kind of double boiler called a kiska:s in Arabic or couscoussière in French, resembling a Chinese steamer atop a Mongolian pot.

Meats, vegetables and spices are cooked in the lower pot. Cooking steam rises through vents into the container above. It is layered with whole herbs such as bay leaves and covered with a fine-grain couscous. The couscous pasta is therefore cooked with aromatic steam. During the cooking process, the couscous needs to be regularly stirred with a fork to prevent lumping, as risotto is cooked.

Although there are many ways to prepare and compose the dish, a classic recipe would call for the following ingredients: salted butter, bell peppers, shallots, Spanish onions, garlic, potatoes, tomatoes, chickpeas, chili pepper, harissa, celery, cinnamon, black peppercorn, carrots, turnips and squash. The idea is for the dish to contain many vegetables and a variety of Mediterranean ingredients.

The first layer consists of a mound of couscous, then a layer of vegetables follows, and finally the meat is positioned on top. The presentation is finished with a drizzle of sauce and a sprinkle of fresh parsley, basil or mint (for lamb and mutton couscous).

Unlike Moroccan tajines, a tajine in Tunisia usually refers to a kind of "quiche", without a crust, made with beaten eggs, grated cheese, meat and various vegetable fillings, and baked like a large cake.

A popular seafood speciality is the 'poisson complet' or the whole fish. The entire fish, excluding internal organs, is prepared and fire-grilled, but it can also be fried, grilled or sautéed. It is accompanied with potato chips and either mild or spicy tastira. The peppers are grilled with a little tomato, a lot of onion and a little garlic, all of which is finely chopped and served with an egg poached or sunny side up. Finely chopped fresh parsley is sprinkled on top; a drizzle of lemon juice and a pinch of sea salt complete the recipe. 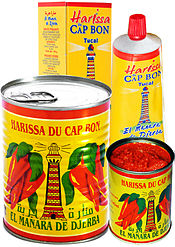 In Tunisian cuisine, there are no sauces as in classic French cuisine, such as sauce béarnaise, sauce anglaise, sauce allemande or sauce hollandaise. Tunisian sauces, which are closer to spicy broths, are an integral part of the dish. Otherwise olive oils are often used as sauces, such as with the Tuna Fricassee.

This said, harissa or hrissa is often said to be a Tunisian sauce, but it is better described as an ingredient of Tunisian cooking or a seasoning. Harissa is made of red chili, garlic, salt, cumin, coriander, olive oil, and sometimes also caraway or mint.

Two Tunisian sauces deserve mentioning: the Kerkennaise sauce and the Mloukhia. The first is made of capers, olive oil, tomato, scallions, coriander, caraway, cumin, parsley, garlic, white vinegar and paprika. The later is a dark green sauce served with shredded lamb or beef.

Other popular food and recipes

Brik is a Tunisian derivative of the börek consisting of thin warka pastry around a filling commonly deep fried. Pictured here from Harissa restaurant in Astoria, NY 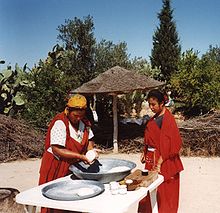 Traditional Tunisian bread being made 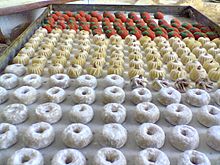