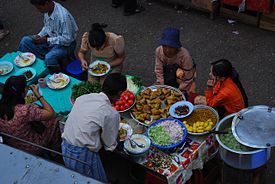 An outdoor cafe in Yangon

Burmese cuisine includes a rich collection of dishes and meals found in various regions of the country, which is also known as Myanmar. Owing to the geographic location of Myanmar, Burmese cuisine has been influenced greatly by China, India and Thailand. However, Burmese cuisine has retained unique preparation techniques and distinct flavours, and there are many regional variations of "standard" dishes.

The diversity of Myanmar's cuisine has been contributed by the Burmese alongside the myriad of local ethnic minorities, neighbouring countries and immigrants from India and China. It is characterized by extensive use of fish products like fish sauce and ngapi. Seafood is a common ingredient in coastal cities such as Sittwe, Kyaukpyu, Mawlamyaing (formerly Moulmein), Mergui (Myeik) and Dawei, while meat and poultry are more commonly used in landlocked cities like Mandalay. Freshwater fish and shrimp have been incorporated into inland cooking as a primary source of protein and are used in a variety of ways, fresh, salted whole or filleted, salted and dried, made into a salty paste, or fermented sour and pressed.

A popular Burmese rhyme sums up the traditional favourites: "A thee ma, thayet; a thar ma, wet; a ywet ma, lahpet" (အသီးမှသရက်၊ အသားမှဝက်၊ အရွက်မှလက်ဖက်။), translated as "Of all the fruit, the mango's the best; of all the meat, the pork's the best; and of all the leaves, lahpet's the best". 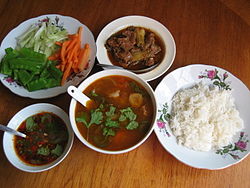 Traditionally, Burmese eat their meals from dishes on a low table, while sitting on a bamboo mat. Dishes are served more or less at the same time. A typical meal includes steamed rice as the main dish and accompanying dishes called hin, including a curried freshwater fish or dried/salted fish dish, a curried meat or poultry dish instead, a light soup called hin gyo (ဟင်းချို), called chinyay hin (ချဉ်ရည်ဟင်း) if sour, and fresh or boiled vegetables to go with a salty dish, almost invariably a curried sauce of pickled fish (ngapi yayjo) in Lower Burma. Fritters such as gourd or onions in batter as well as fish or dried tofu crackers are extra.

Out of respect, the eldest diners are always served first before the rest join in; even when the elders are absent, the first morsel of rice from the pot is scooped and put aside as an act of respect to one's parents, a custom known as u cha (ဦးချ, lit. first serve).

The Burmese eat with their right hand, forming the rice into a small ball with only the fingertips and mixing this with various morsels before popping it into their mouths. Chopsticks and a Chinese style spoon are used for noodle dishes, although noodle salads are more likely to be eaten with just a spoon. Knives and forks are used rarely in homes but will always be provided for guests and are available in restaurants and hotels. Drinks are not often served with the meal and, instead, the usual liquid accompaniment is in the form of a light broth or consomme served from a communal bowl. Outside of the meal, the Burmese beverage of choice is light green tea, yay nway gyan (ရေနွေးကြမ်း). 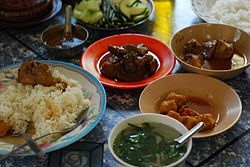 The country's diverse religious makeup influences its cuisine, as Buddhists avoid beef and Muslims pork. Beef is considered taboo by devout Buddhists because the cow is highly regarded as a beast of burden, although it is increasingly eaten by Buddhists.[1] Pork is avoided by nat worshippers, as nats are believed to be averse to pork.[2] Vegetarian dishes are also common, especially during the Buddhist Lent (Wa-dwin), a three-month Rains Retreat, as well as Uposatha sabbath days. During this time, only two meals (i.e. breakfast and lunch) are consumed before midday to observe the fasting rules (u bohk saunk) and abstainance from meat (thek that lut, literally 'free of killing') is observed by devout Buddhists.

The countries that border Myanmar, especially India, China and Thailand, have influenced Burmese cuisine.[3] Indian influences are found in Burmese versions of dishes such as samosas and biryani, and Indian curries, spices and breads such as naan and paratha. Chitti kala (ချစ်တီးကုလား) or Chettiar (Southern Indian) cuisine is also popular in cities. Chinese influence in Burmese cuisine is shown in the use of ingredients like bean curd and soya sauce, various noodles as well as in stir frying techniques. As in neighbouring Thailand and Laos, fried insects are eaten as snacks.

Ingredients used in Burmese dishes are often fresh. Many fruits are used in conjunction with vegetables in many dishes. The Burmese eat a great variety of vegetables and fruits, and all kinds of meat. A very popular vegetable is the danyin thi, which is usually boiled or roasted and dipped in salt, oil and sometimes, cooked coconut fat. 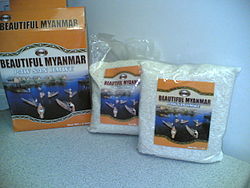 The most common starch (staple food) in Myanmar is white rice or htamin (ထမင်း), which is served with accompanying meat dishes called hin (ဟင်း). Paw hsan hmwe (ပေါ်ဆန်မွှေး), fragrant aroma rice is the most popular rice used in Burma and is rated as high as the Thai fragrant rice or Basmati rice. Today, Myanmar is the world's number six producer of rice, though in recent times less is exported and even domestic supplies cannot be guaranteed.[4]

Ngapi (ငပိ) is considered the cornerstone of any Burmese meal. It is used in a versatile manner in that it is used in soup base, in salads, in main dishes and also in condiments. Popular varieties depend on the region.

The ngapi of Rakhine State contains no or little salt, and uses marine fish. It is used as a soup base for the Rakhine 'national' cuisine, mont di (မုန့်တီ). It is also used widely in cooking vegetables, fish and even meat.

In the coastal Ayeyarwady and Tanintharyi divisions, the majority of ngapi is instead based on freshwater fish, with a lot of salt. Ngapi is also used as a condiment such as ngapi yay (ငပိရည်), an essential part of Karen cuisine, which includes runny ngapi, spices and boiled fresh vegetables. In Shan State, ngapi is made instead from fermented beans, and is used as both a flavoring and also condiment in Shan cuisine.

Burmese cuisine is full of condiments, from sweet, sour to savory. The most popular are pickled mango, balachaung (shrimp and ngapi floss) and ngapi gyaw (fried ngapi) and preserved vegetables in rice wine (from Shan State). Ngapi plays a major part in condiments, as a dip for fresh vegetables.

Another bean based condiment popular amongst the Bamar and the central dry region is Pone Yay Gyi - a thick salty black paste made from fermented soy beans. It is used in cooking, especially pork, and as a salad, with ground nut oil, chopped onions and red chili. Bagan is an important producer of Pone Yay Gyi.

Myanmar has a wide range of fruits, and most are of tropical origin. However, some notable Western fruits such as strawberries are also popular. Durian, guava and others are commonly served as desserts. Other fruits include mango, banana, jackfruit, plum, lychee, papaya, pomelo, water melon, pomegranate, mangosteen, sugar-apple and rambutan. 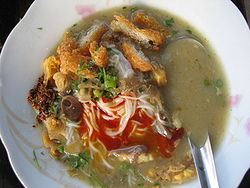 Mohinga, the national dish of Burma 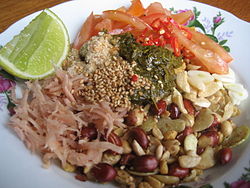 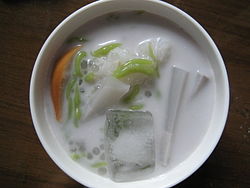 Shwe yin aye is a popular and refreshing dessert

Because a standardised system of romanisation for spoken Burmese does not exist, pronunciations of the following dishes in modern standard Burmese approximated using IPA are provided (see IPA for Burmese for details). 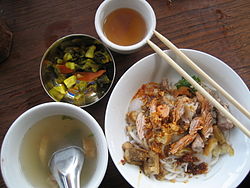 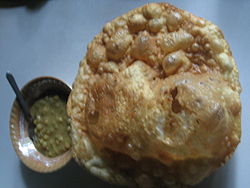 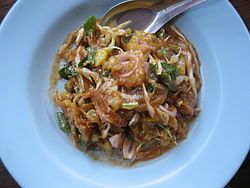 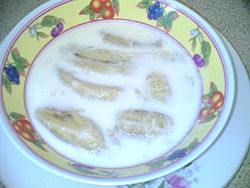