The cuisine of Algeria is a distinct fusion of Middle Eastern and Mediterranean cuisines. 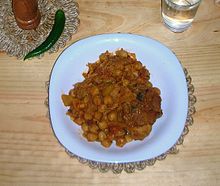 Algerian cuisine differs slightly from region to region. Algerian cuisine has strong Berber but also Ottoman Turkish influence due to the Ottoman occupation. The main varieties are Algiers, Oran , Constantine (largely , Kabylie and Sahara. Dairy products come mainly from Kabylie. Breakfasts, which exist since the French colonization, is generally light. Tea or Turkish coffee are served with some pastries. At noon, street stalls which sell often shawarma, are very common in the cities. The dinner, which is very copious, is often eaten late in the night, especially during the month of Ramadan. every region has its own cuisine like kabilie (tikourbabine,ftir oukessoul,berkoukes,felfel, aghrum aquran abazine, tahabboult s elmerqua) algier (mtewwew,chtitha djej,sfiria,khdiwej,chorba bida,momo fi hjer mmo,tagine khokh ,tagine mechmach....) constantine (rechta ,rrfiss ,chebah el soffra ,trida,tlitli,......)

Algeria, like other Maghreb countries, produces a large range of Mediterranean fruits and vegetables and even some tropical ones.[1] Lamb is commonly consumed. Mediterranean seafood and fish is also eaten and produced by the little inshore fishing.

The khabz, traditional Arabic flatbread, is the base of Algerian cuisine and eaten at all meals. The main Algerian dish is merguez, a spicy lamb sausage, that originate from the Atlas mountains. Other common dishes include berber couscous, chakchouka, Karantita, pastilla that is a speciality from Tlemcen and the Chaoui dish chakhchoukha. Spices used in Algerian cuisine are dried red chillies of different kinds, caraway, ras el hanout, black pepper and cumin, among others.

There are also dishes of Spanish origin in Algeria, like the Gaspacho Oranais, an Algerian version of a Manchego dish.[2]

Sweets like seasonal fruits are typically served at the end of meals. Common pastries include makroudh, nougat and asida. Halwa are cookies eaten during the month of Ramadan. Algerians are the second greatest consumers of honey per capita in the world. Mint tea is generally drunk in the morning and for ceremonies with pastries. Algerians are heavy coffee consumers and Turkish coffee is very popular. Fruit juice and soft drinks are very common and are often drunk daily. Algeria previously produced a large quantity of wine during the French colonization but production has decreased since its independence.