Nouvelle cuisine (French, "new cuisine") is an approach to cooking and food presentation used in French cuisine. By contrast with cuisine classique, an older form of French haute cuisine, nouvelle cuisine is characterized by lighter, more delicate dishes and an increased emphasis on presentation. 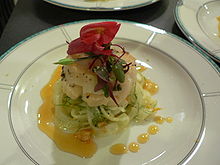 The term nouvelle cuisine has been used many times in the history of French cuisine. In the 1740s for example, the work of Vincent La Chapelle, François Marin and Menon was described as nouvelle cuisine, and in the 1880s and 1890s even the cooking of Georges Auguste Escoffier was described with the term. The modern usage can be attributed to authors André Gayot,[1] Henri Gault and Christian Millau, who used nouvelle cuisine to describe the cooking of Paul Bocuse, Alain Chapel, Jean and Pierre Troisgros, Michel Guérard, Roger Vergé and Raymond Oliver, many of whom were once students of Fernand Point.[2] Paul Bocuse claimed that Gault first used the term to describe food prepared by Bocuse and other top chefs for the maiden flight of the Concorde airliner in 1969.[3]

The style Gault and Millau wrote about was a reaction to the French cuisine classique placed into "orthodoxy" by Escoffier. Calling for greater simplicity and elegance in creating dishes, nouvelle cuisine is not cuisine minceur ("thin cooking"), which was created by Michel Guérard as spa food. It has been speculated that the outbreak of World War II was a significant contributor to nouvelle cuisine's creation—the short supply of animal protein during the German occupation made it a natural development.[4]

There is a standing debate as to whether nouvelle cuisine has been abandoned. Much of what it stood for—particularly its preference for lightly presented, fresh flavors—has been assimilated into mainstream restaurant cooking. By the mid-1980s some food writers stated that the style of cuisine had reached exhaustion and many chefs began returning to the cuisine classique style of cooking, although much of the lighter presentations and new techniques remained.[2]