Cuatro Torres Business Area (CTBA) (Spanish for Four Towers Business Area) is a business district located in the Paseo de la Castellana in Madrid (Spain), on the former Ciudad Deportiva of Real Madrid. The area contains the tallest skyscrapers in Madrid and Spain (Torre Espacio, Torre de Cristal, Torre Sacyr Vallehermoso and Torre Caja Madrid). The construction of the buildings finished in 2008. The complex was formerly known as Madrid Arena. 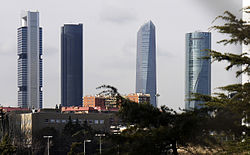 Torre Espacio (Spanish for Space Tower) is 224.5 metres (736 feet) tall and has 57 floors. In November 2006, its height surpassed that of the Gran Hotel Bali, thus making it the tallest building in Spain, although it retained that title only for a short time (see below). The structure was topped out on March 19, 2007. On the night of that day, Alberto Ruiz Gallardón, mayor of Madrid, attended a ceremony with fireworks to commemorate the event. It was designed by Henry N. Cobb and built by Obrascón Huarte Lain. 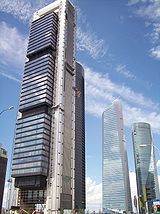 Torre Caja Madrid (Spanish for Madrid Box Tower), with a height of 250 m and 45 floors, is the tallest of the four buildings in the complex, just 89 cm higher than Torre de Cristal.

Designed by Lord Foster, it was first known as Torre Repsol and would have served as headquarters for Repsol YPF, oil and gas company. During the construction of the tower, Repsol decided to change the location of its future headquarters and the financial institution Caja Madrid purchased the building for €815 million in August 2007 [1].

It was built by a joint venture of Dragados and Fomento de Construcciones y Contratas[2].

Torre de Cristal (Spanish for Crystal Tower). With a height of 249.5 meters, it ranks as the second tallest building in the country after Torre Caja Madrid. In April 2007, its structure surpassed the height of Torre Espacio, for a while becoming the tallest building and structure in Spain.

It has been designed by Cesar Pelli and it was built by Dragados[3].

Torre Sacyr Vallehermoso is a 52-floor and 236 meters (774 feet) tall skyscraper, completed in 2008. It has been designed by Carlos Rubio Carvajal and Enrique Álvarez-Sala Walter and was built by Sacyr Sau [4].

The towers under construction were depicted several times in the Spanish remakes of the Hermanos y Detectives and Sin tetas no hay paraíso TV series.

Spanish pop singer David Bustamante released one of his albums in the Torre de Cristal attic.

The Torre Espacio building project was featured on the Discovery Channel's Build It Bigger series due to the skyscraper's unique form and shape.