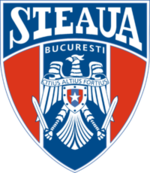 CSA Steaua Bucureşti (Clubul Sportiv al Armatei Steaua – English: Army Sports Club Steaua) is a Romanian sports society from Bucharest, Romania run by the Ministry of National Defence of Romania. It is the most successful club in Romania in terms of international and overall trophies. Founded on 7 June 1947 as ASA Bucureşti (Asociaţia Sportivă a Armatei – English Army Sports Association), the club changed its name several times before settling on Steaua (English: The Star) in 1961.

The club is historically known as the Romanian Army sports club. The only department to have separated from the sports society is that of football in 1998, taking the name FC Steaua Bucureşti and whose only links to the Army remain the historical tradition and their home ground, Stadionul Ghencea, which still belongs to the Ministry of National Defence but has been leased on a 49 year-long period to the football club.

On 7 June 1947, at the initiative of several officers of the Romanian Red Army House, the first Romanian sports club of the Army was born through a decree signed by General Mihail Lascăr, High Commander of the Romanian Royal Army. The club was to be called ASA Bucureşti (Asociaţia Sportivă a Armatei Bucureşti – English: Army Sports Association), with seven different sections (football, fencing, volleyball, boxing, shooting, athletics, tennis), and its leadership was entrusted to General-Major Oreste Alexandrescu. The decision had been adopted on the ground that several officers were already competing for different clubs, premise to a good nucleus for forming future competitive teams. This was also the year of the club's first national title, achieved by Gheorghe Viziru in tennis. 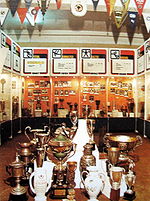 As the Romanian Royal Army turned into the People's Army following the coup d'état at the end of 1947, which saw Romania transformed from a monarchy to a Communist inspired people's republic, several name changes carried on. On June 5, 1948, by Order 289 of the Ministry of National Defence, ASA became CSCA (Clubul Sportiv Central al Armatei – English: Central Sports Club of the Army), together with the society's first crest (an A-labeled red star, symbol of the Red Army, on a blue disc). In March 1950, CSCA changed its name to CCA (Casa Centrală a Armatei, English: "Central House of the Army"). In 1961, CCA changed its names for the final time to CSA Steaua Bucureşti (Clubul Sportiv al Armatei Steaua – English: Army Sports Club Steaua). The name Steaua is Romanian for The Star and was adopted because of the presence, just like in any other Eastern-European Army team, of a red star (turned yellow now, to symbolize Romania's tri-colour red, yellow and blue flag) on their badge.

9 April 1974 witnessed the inauguration of the country's most modern sports complex at that time, Complexul Sportiv Steaua (Steaua Sports Complex), comprising a central football-use arena (30,000 capacity Stadionul Ghencea), six other training pitches also used by the rugby team and mini-hotel for the athletes. Today, Complexul Sportiv Steaua has been leased on a 49 year period to the football club, planning for renovation.

The football section was one of the seven sections formed at CSA Steaua's foundation, on 7 June 1947. The team's big breakthrough came in 1986, when they managed to become the first ever European champions coming from an Eastern country by winning the European Champions Cup. Ever since, they became the most successful football team in the country, with an impressive roll of 23 National Championships, 21 Romanian Cups, 5 Romanian Super Cups, 1 European Champions Cup and 1 European Supercup.

Currently the football section is the only one to have separated from CSA Steaua (in 1998), taking the name of Fotbal Club Steaua Bucureşti. They are usually called Oile (the Sheeps), Măscăricii (the Laughing Stocks / the Clowns) or Muflonii (the Mufloons).

They play their home matches at Lucian Grigorescu Sports Hall. The current coach is Radu Voina. The handball and ice-hockey teams are the fans' second favourite teams after the football one, and derby matches against HCM Constanţa and especially Dinamo are highly attended.

Former players include such big names in the history of handball, as Ştefan Birtalan, Vasile Stângă, Cornel Oţelea and Cristian Gaţu.

Steaua Bucureşti Hockey founded an Ice Hockey section in 1951. Hochei Club Steaua Suki Bucureşti has been an autonomous club since 2004, but still belongs to CSA Steaua. It is the most successful club in Romania, having won the domestic league 41 times, a standing world record for ice hockey national championships. They compete inside a national competition of only 6 teams and in which, besides them, only SC Miercurea Ciuc are especially relevant. Steaua plays SC Miercurea Ciuc in the final every year over a "best of 7" encounter. The derby match between Steaua and SC Miercurea Ciuc is the biggest ice hockey match in the country and one of an immense rivalry, as Steaua fans are mainly of Romanian nationality while Miercurea Ciuc's are mainly Hungarian.

The ice-hockey team, along with the handball one, are the fans' second favourite teams after the football one. They play their home matches at the Mihail Flamaropol Ice Rink. The current coach is Cam Severson.

The Steaua Bucureşti rugby team has won the domestic league 24 times since 1947. Romanian rugby club teams do not participate in major European competitions because of the obvious value difference between them and the ones from the leading continental countries. Instead, a Romanian national rugby union team, consisting mainly of Steaua players, participates every year in the European Challenge Cup as Bucureşti Rugby.

The team plays its home matches at Ghencea II Field, inside the Steaua Sports Complex, right next to the football Ghencea Stadium. The current coach is Costică Florea.

Nationally, Steaua has been performing rather poorly lately being a mid-table team in the national first league. It had even been on the verge of extinction a few years ago when it moved to the town of Slatina.

Even though the Romanian national team has had some outstanding performances lately, club water polo has only a minor word to say in international competitions. Steaua are one of the leading teams inside a national league with only four professional clubs, the rest being amateur. The team's official name is CSA Steaua Stirom Bucureşti (after their sponsors).