Crystallographic image processing (CIP) is a set of methods for determining the atomic structure of crystalline matter from high-resolution electron microscopy (HREM) images obtained in a transmission electron microscope (TEM). The term was created in the research group of Sven Hovmöller at Stockholm University during the early 1980s and became rapidly a label for this approach.

Many beam HREM images are only directly interpretable in terms of a projected crystal structure if they have been recorded under special conditions, i.e. the so called Scherzer defocus. In that case the positions of the atom columns appear as black blobs in the image. Difficulties for interpretation of HREM images arise for other defocus values because the transfer properties of the objective lens alter the image contrast as function of the defocus. Hence atom columns which appear at one defocus value as dark blobs can turn into white blobs at a different defocus and vice versa. In addition to the objective lens defocus (which can easily be changed by the TEM operator), the thickness of the crystal under investigation has also a significant influence on the image contrast. These two factors often mix and yield HREM images which cannot be straightforwardly interpreted as a projected structure. If the structure is unknown, so that image simulation techniques cannot be applied beforehand, image interpretation is even more complicated. Nowadays two approaches are available to overcome this problem: one method is the exit-wave function reconstruction method, which requires several HREM images from the same area at different defocus and the other method is crystallographic image processing (CIP) which processes only a single HREM image. Exit-wave function reconstruction [1] [2] provides an amplitude and phase image of the (effective) projected crystal potential over the whole field of view. The thereby reconstructed crystal potential is corrected for aberration and delocalisation and also not affected by possible transfer gaps since several images with different defocus are processed. CIP on the other side considers only one image and applies corrections on the averaged image amplitudes and phases. The result of the latter is a pseudo-potential map of one projected unit cell. The result can be further improved by crystal tilt compensation and search for the most likely projected symmetry. In conclusion one can say that the exit-wave function reconstruction method has most advantages for determining the (aperiodic) atomic structure of defects and small clusters and CIP is the method of choice if the periodic structure is in focus of the investigation or when defocus series of HREM images cannot be obtained, e.g. due to beam damage of the sample. However, a recent study on the catalyst related material Cs0.5[Nb2.5W2.5O14] shows the advantages when both methods are linked in one study [3].

Aaron Klug suggested in 1979 that a technique that was originally developed for structure determination of membrane protein structures can also be used for structure determination of inorganic crystals [4] [5]. This idea was picked up by the research group of Sven Hovmöller which proved that the metal framework partial structure of the heavy-metal oxide K8-xNb16-xW12+xO80 could be determined from single HREM images recorded at Scherzer defocus [6]. In later years the methods became more sophisticated so that also non-Scherzer images could be processed [7]. One of the most impressive applications at that time was the determination of the complete structure of the complex compound Ti11Se4, which has been inaccessible by X-ray crystallography [8]. Since CIP on single HREM images works only smoothly for layer-structures with at least one short (3 to 5 Å) crystal axis, the method was extended to work also with data from different crystal orientations (= atomic resolution electron tomography). This approach was used in 1990 to reconstruct the 3D structure of the mineral staurolite HFe2Al9Si4O4 [9] [10] and more recently to determine the structures of the huge quasicrystal approximant phase ν-AlCrFe [11] and the structures of the complex zeolites TNU-9 [12] and IM-5 [13].

The principal steps for solving a structure of an inorganic crystal from HREM images by CIP are as follows (for a detailed discussion see [14]). 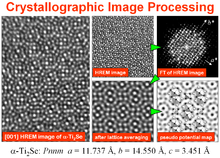 Crystallographic Image Processing (CIP) of a high-resolution electron microscopy (HREM) image of α-Ti2Se recorded with a 300 kV TEM (JEOL 3010UHR, point resolution 1.7 Å) along the [001] zone axis. In the first step the Fourier transform of the HREM image is calculated (only the amplitudes are shown). The position of the white ring marks the first crossover of the contrast transfer function (CTF) which is used to determine the defocus value (Δf = -650 Å). The reciprocal lattice is then indexed and amplitudes and phases are extracted. The amplitudes and phases can be used to calculate the averaged image for one unit cell via Fourier synthesis. The pseudo-potential map (p2gg symmetry) for determining 2D atomic co-ordinates was obtained after correction of the phase-shifts imposed by the CTF. The average agreement of atomic co-ordinates determined from the pseudo-potential map and the superimposed model from X-ray diffraction is about 0.2 Å[15].