A thin-film solar cell (TFSC), also called a thin-film photovoltaic cell (TFPV), is a solar cell that is made by depositing one or more thin layers (thin film) of photovoltaic material on a substrate. The thickness range of such a layer is wide and varies from a few nanometers to tens of micrometers.

The silicon is mainly deposited by chemical vapor deposition, typically plasma-enhanced (PE-CVD), from silane gas and hydrogen gas. Other deposition techniques being investigated include sputtering and hot wire techniques.

The silicon is deposited on glass, plastic or metal which has been coated with a layer of transparent conducting oxide (TCO).

A p-i-n structure is usually used, as opposed to an n-i-p structure. This is because the mobility of electrons in a-Si:H is roughly 1 or 2 orders of magnitude larger than that of holes, and thus the collection rate of electrons moving from the p- to n-type contact is better than holes moving from p- to n-type contact. Therefore, the p-type layer should be placed at the top where the light intensity is stronger, so that the majority of the charge carriers crossing the junction would be electrons.[3]

Micromorphous silicon module technology combines two different types of silicon, amorphous and microcrystalline, in a top and a bottom photovoltaic cell. These two materials are chosen because their different absorption spectrums and easily combined process. Because the two different materials are both Si, they can be manufactured in the same technology, which now is PECVD. The band gap of a-Si is 1.7 eV and that of c-Si is 1.1 eV, which eventually broaden the spectral acceptance of the micromorph tandem solar cell. The c-Si layer can help to absorb the energy of red and infrared spectrum and increase the overall efficiency. The best efficiency can be achieved at transition between a-Si and c-Si. Use of protocrystalline silicon for the intrinsic layer has shown to optimize the open-circuit voltage of an a-Si photovoltaic cell.[4] 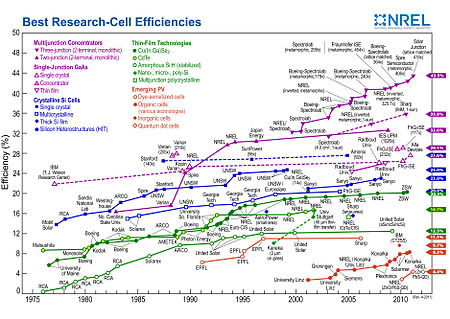 These types of silicon present dangling and twisted bonds, which results in deep defects (energy levels in the bandgap) as well as deformation of the valence and conduction bands (band tails). The solar cells made from these materials tend to have lower energy conversion efficiency than bulk silicon (also called crystalline or wafer silicon), but are also less expensive to produce. The quantum efficiency of thin-film solar cells is also lower due to reduced number of collected charge carriers per incident photon.

Amorphous silicon has a higher bandgap (1.7 eV) than crystalline silicon (c-Si, 1.1 eV), which means it absorbs the visible part of the solar spectrum more strongly than the infrared portion of the spectrum. As nc-Si has about the same bandgap as c-Si, the nc-Si and a-Si can advantageously be combined in thin layers, creating a layered cell called a tandem cell. The top cell in a-Si absorbs the visible light and leaves the infrared part of the spectrum for the bottom cell in nc-Si.

Recently, solutions to overcome the limitations of thin-film silicon have been developed. Light trapping schemes where the incoming light is obliquely coupled into the silicon and the light traverses the film several times enhance the absorption of sunlight in the films. Thermal processing techniques enhance the crystallinity of the silicon and pacify electronic defects.[citation needed]

Thin film photovoltaic panels being installed onto a roof

Thin film solar panels are commercially available for installation onto the roofs of buildings, either applied onto the finished roof, or integrated into the roof covering. The advantage over traditional PV panels is that they are very low in weight, are not subject to wind lifting, and can be walked on (with care). The comparable disadvantages are increased cost and reduced efficiency.

A silicon thin film technology is being developed for building integrated photovoltaics (BIPV) in the form of semitransparent solar cells which can be applied as window glazing. These cells function as window tinting while generating electricity.

Since the invention of the first modern silicon solar cell in 1954, incremental improvements have resulted in modules capable of converting 12 to 18 percent of solar radiation into electricity.[5] The performance and potential of thin-film materials are high, reaching cell efficiencies of 12–20%; prototype module efficiencies of 7–13%; and production modules in the range of 9%. Future module efficiencies are expected to climb close to the state-of-the-art of today's best cells, or to about 10–16%.[6]

Annual manufacturing volume in the United States has grown from about 12 megawatts (MW) per year in 2003 to more than 20 MW/yr in 2004; 40–50 MW/yr production levels were expected in 2005 with continued rapid growth in the years after that.

Costs are expected to drop to below $100/m2 in volume production, and could reach even lower levels—well under $50/m2, the DOE/NREL goal for thin films—when fully optimized. At these levels, thin-film modules will cost less than fifty cents per watt to manufacture, opening new markets such as cost-effective distributed power and utility production to thin-film electricity generation.[7]

In recent years, the manufacturers of thin-film solar modules are bringing costs down and gaining in competitive strength through advanced thin film technology. However, the traditional crystalline silicon technologies will not give up their market positions for a few years because they still hold considerable development potential in terms of the cost. Efficiency of thin film solar is considerably lower and thin film solar manufacturing equipment suppliers intend to score costs of below USD 1/W, and Anwell Technologies Limited claimed that they intend to bring it down further to USD 0.5/W.[9] Those equipment suppliers have been doing R&D for micro-morphous silicon modules since 2008. This technology represents a development based on the thin-film panels made of ordinary amorphous silicon marketed at present that brings higher cell efficiency by depositing an additional absorber layer made of micro crystalline silicon on the amorphous layer. Some equipment suppliers even claim that there will be machinery in market to manufacture these new modules at $0.70.[10] With such potential of further development of thin film solar technology, the European Photovoltaic Industry Association (EPIA) expects that manufacturing capacities for these technologies will double to over 4GW by 2010 representing a market share of around 20%.[11]
GE announced plans to spend $600 million on a new CdTe solar cell plant and enter this market [12]

First Solar, the CdTe thin-film manufacturer stated that "at the end of 2007, over 300 MW of First Solar PV modules had been installed worldwide." Below is a list of several recent installations:[6]

Thin-film photovoltaic cells are included in the TIME's Best Inventions of 2008.[22]