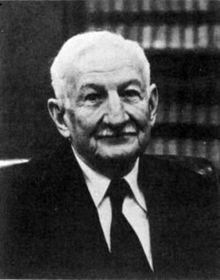 Born in Rome, Georgia, Fahy was the son of Thomas and Sarah (Jonas) Fahy. Charles attended the University of Notre Dame and then went to Georgetown University Law School. There he received his LL.B. in 1914 and was admitted to the D.C. bar in the same year. He served the United States in World War I as a naval aviator attached to the British and American forces. Fahy was awarded the Navy Cross. After the war he returned to Washington, D.C. and practiced law until 1924, before moving his practice to Santa Fe, New Mexico, where he resided until 1933. While in Sante Fe, Fahy served as the city attorney in 1932.

J. Warren Madden (left), Chair of the National Labor Relations Board (NLRB), is shown going over testimony with Charles Fahy (right), General Counsel of the NLRB, and Nathan Witt, NLRB Executive Secretary, prior to testifying before Congress on December 13, 1937.

In 1933, Fahy returned to Washington when he was appointed first assistant solicitor to the Department of the Interior. That same year he was appointed as a member of the Petroleum Administrative Board, and then served as its president from 1934-1935. As general counsel of the National Labor Relations Board from 1935-1940, Fahy began his career in Supreme Court litigation on behalf of labor rights. Upon the enactment of the Wagner Act in 1935, Fahy, on behalf of the NLRB, often appeared in front of both Houses of Congress to offer testimony and litigated cases in the Supreme Court brought against the government. By the time he was appointed assistant solicitor general in 1940, Fahy had already appeared eighteen times in front of the Supreme Court, where his arguments were wholly sustained sixteen times and partially upheld twice.

Fahy was appointed Solicitor General by President Franklin D. Roosevelt on November 1, 1941. While Solicitor General, Fahy continued to advocate for worker's labor rights, and was involved in cases regarding the constitutionality of wiretapping and the citizenship of American Communists.

As Solicitor General, Fahy is best known for his defense before the Supreme Court of the internment during World War II of over 100,000 persons of Japanese descent, most of whom were American citizens. However, his defense has been criticized in 2011 by Acting Solicitor General Neal Katyal because of falsities and factual omissions made by Fahy to the Court:

By the time the cases of Gordon Hirabayashi and Fred Korematsu reached the Supreme Court, the Solicitor General had learned of a key intelligence report that undermined the rationale behind the internment. The Ringle Report, from the Office of Naval Intelligence, found that only a small percentage of Japanese Americans posed a potential security threat, and that the most dangerous were already known or in custody. But the Solicitor General did not inform the Court of the report, despite warnings from Department of Justice attorneys that failing to alert the Court “might approximate the suppression of evidence.” Instead, he argued that it was impossible to segregate loyal Japanese Americans from disloyal ones. Nor did he inform the Court that a key set of allegations used to justify the internment, that Japanese Americans were using radio transmitters to communicate with enemy submarines off the West Coast, had been discredited by the FBI and FCC. And to make matters worse, he relied on gross generalizations about Japanese Americans, such as that they were disloyal and motivated by “racial solidarity.”[1]

Fahy served as Solicitor General until 1945, after having argued more than 70 cases in front of the Supreme Court, before being called upon by General Dwight D. Eisenhower to serve as director of the legal division of the U.S. Group Control Council in Germany in the aftermath of World War II. After returning from his tour of duty in Germany, Fahy became the Legal Adviser of the Department of State. He was also a member of the U.S. Legal Committee of the General Assembly of the United Nations, held in New York City in 1946.

Fahy returned to private practice in 1947, but was again called to serve the federal government as chairman of the President's Committee on Equality of Treatment and Opportunities in Armed Forces, from 1948-1950. On October 21, 1949, Fahy received a recess appointment from Harry S Truman to a new seat on the United States Court of Appeals for the D.C. Circuit created by 63 Stat. 493. Formally nominated on January 5, 1950, Fahy was confirmed by the United States Senate on April 4, 1950, and received his commission on April 7, 1950. He assumed senior status on April 17, 1967, and served in that capacity until his death.

Fahy was the recipient of a number of awards, including the Navy Cross (1917), a medal for military merit (1946), the Robert S. Abbott Memorial Award (1951), John Carroll Award from the Georgetown University Member Alumni (1953), and the D.C. Distinguished Service Award (1969). Charles Fahy died on September 17, 1979, at the age of 87 in Washington, D.C. He was survived by his wife Mary Agnes Lane, and children Charles (Dom Thomas Fahy O.S.B.), Anne Marie (Sheehan), Sarah Agnes (Sister Sarah Fahy S.N.D.), and Mary Agnes (Johnson).

This article incorporates public domain material from websites or documents of the Office of the Solicitor General.