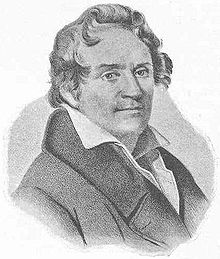 Bernhard Henrik Crusell (15 October 1775 – 28 July 1838)[1] was a Swedish-Finnish clarinetist, composer and translator, "the most significant and internationally best-known Finnish-born classical composer and indeed, — the outstanding Finnish composer before Sibelius".[2]

Crusell was born in Uusikaupunki (Swedish: Nystad), Finland, into a poor family of bookbinders. His grandfather, Bernhard Kruselius had learned the trade of bookbinding in Turku and Stockholm, then settled in Pori where he fathered nine children, including Crusell's father Jakob, who also became a bookbinder. In 1765, after Jakob completed his apprenticeship, he moved to Uusikaupunki and married Helena Ylander, but she died about one year later. In 1769 he married Margaretha Messman. The couple had four children, but Bernhard was the only one who lived to become an adult.[3] Later in life Crusell described this period of his life, writing in the third person:

In his little town of birth there was only one person who had an active interest in music: a shop assistant who could be heard in the evenings playing the flute for his own amusement. One night, the four-year old Berndt was sitting in the street, leaning against a wall, on top of the world with admiration for the sweet melodies. His parents, who had been looking for their son for a long time, scolded him severely, but this could not stop the boy from returning to his favourite spot the next evening. This time he got a beating for his disobedience, but as it was to no avail, they left him to his "craze", confident that he would come back home as soon as the flute went silent...[4]

When Crusell was eight, the family moved to Nurmijärvi about 23 miles north of Helsinki.[3] His innate interest in music continued, and he learned to play a friend's clarinet by ear.[5] He soon began to receive training from a member of the Nyland regimental band.[6]

In 1788, when he was thirteen, another family friend, aware of the young man's natural ability, took him to see Major O. Wallenstjerna at Sveaborg (Finnish: Suomenlinna). Sveaborg was a Swedish fortress built on six islands just off the coast of Helsinki. The educated officers of the fort had significant influence on the culture and politics of the city. Wallenstjerna, impressed with Crusell's playing, recruited him as a volunteer member of the Sveaborg military band and gave him a place to live with his own family. Crusell received an education at Sveaborg and excelled in music and languages. In 1791 Wallenstjerna transferred to Stockholm and Crusell went with him. Although Crusell spent most of the rest of his life in Sweden, he always considered himself a Finn. In his final years in a letter to Runeberg he called himself a "finsk landsman" (a Finn).[5] He also maintained his travel diaries in Finnish.[citation needed]

Career as a clarinetist

In Stockholm Crusell continued his studies and established himself as a clarinet soloist. In 1792, at age sixteen, he received an appointment as the director of the regimental band, and in 1793 became principal clarinet with the Hovkapellet (Royal Court Orchestra), which was directed by his composition teacher, the German composer Abbé Vogler. In 1798 he received financial assistance which enabled him to live in Berlin for a few months and study with the well-known German clarinetist Franz Tausch (1762–1817).[5] Tausch had founded the German school of clarinet playing which emphasized beauty of tone over technique.[7] Crusell's progress was swift, and he performed at concerts in Berlin and Hamburg before returning to Sweden. The review of the Hamburg concert in Allgemeine musikalische Zeitung was positive.[8]

Crusell lived in Sweden for the rest of his life, going back to Finland only once. After a trip to St. Petersburg, on his return trip to Sweden, he performed in Helsinki on 7 July 1801, with the pianist Fredrik Lithander as his accompanist, and in Turku on 30 July, in a concert organized by the orchestra of the Turku Society of Music.[5][9]

In Stockholm Crusell had become acquainted with the French ambassador to Sweden. This friendship encouraged and enabled him to undertake a trip to Paris in 1803. There he performed and also studied clarinet with Jean-Xavier Lefèvre at the newly formed Conservatoire.[5] On 2 June, with the encouragement of Lefèvre, he purchased a new mouthpiece made by Michel Amlingue (1741–1816) and on 14 September a six-key C clarinet made by Jean Jacques Baumann.[10] Before about 1800 Crusell had been playing with the reed turned up, but later turned it down, the modern practice and a position more compatible with cantabile playing.[6] Exactly when he did this is not well established, but he may have favored the reed-above position because of a lack of evenness in his teeth.[11]

Around this time the Théâtre-Italien de Paris offered Crusell a position as first clarinetist. Gustav IV Adolf of Sweden, anxious to keep Crusell in the royal orchestra, denied a petition for an extension of leave and as a positive inducement made him chief conductor of the bodyguard regiment bands. After Crusell returned to Stockholm he remained with the Royal Court Orchestra until 1833.[5]

In June 1811 Crusell made another trip to see Tausch in Berlin, and the two men discussed clarinets. Later that month he visited a benefactor in Leipzig, and in July he purchased a new instrument from Heinrich Grenser in Dresden. His Grenser clarinet was an advanced design for the time, with eleven keys. (A picture of Crusell's Grenser clarinet can be found here.) Later, in 1822, he again went to Dresden and purchased additional clarinets from the Grenser shop's successor, Grenser & Wiesner, and from another maker by the name of Bormann. The Stockholm Music Museum possesses five clarinets made by Grenser & Wiesner in 1822 or later, four with eleven, and one with ten keys.[12]

During his career Crusell became increasingly well known as a clarinet soloist, not only in Sweden but also in Germany, and even in England.[5] He played compositions by Beethoven, Jadin, Krommer, Lebrun, Mozart, and Peter Winter, among others.[6] Of more than 50 known concert reviews (most of which appeared in the German Allgemeine musikalische Zeitung), not even one had any negative comment.[13] Carl Abraham Mankell (1802–1868), music critic of Svenska Tidningen (Swedish News), admired Crusell's playing for the roundness of his tone and its evenness in quality throughout the range of the instrument.[5] Crusell was also greatly admired for his pianissimo playing.[6] "It is indicative of his reputation that he was for many years the best-paid musician in the court orchestra."[2]

Career as a composer

Between 1791 and 1799 Crusell studied music theory and composition with Abbé Vogler and another German teacher, Daniel Böritz, when Böritz was resident in Stockholm. In 1803 while in Paris Crusell studied composition at the Conservatoire with Gossec and Berton. He composed pieces, including concertos and chamber works, not only for his own use, but also for other wind players in the court orchestra. In 1811 he travelled to Leipzig where he established a relationship with the music publisher Bureau de Musique, which became part of C. F. Peters in 1814.[2][6]

From 1818 to 1837 during the summers he conducted military bands in Linköping, providing them with arrangements of marches and overtures by Rossini, Spohr, and Weber and composing pieces for male choir. In 1822 he published three volumes of songs to texts by the Swedish poet Tegnér and others, and in 1826 another volume, Frithiofs saga, with ten songs to texts by Tegnér. An opera, Lilla slavinnan (The Little Slave Girl), was first performed in Stockholm in 1824 and was repeated 34 times in the following 14 years.[6]

Other accomplishments and awards

Crusell was a skillful linguist, translating the important Italian, French, and German operas for performances in Sweden. His translation of Mozart's Le nozze di Figaro, first performed in 1821, resulted in his induction into the Geatish Society, an association of literary academics in Sweden. In 1837 he was awarded a Gold Medal by the Swedish Academy and was inducted into the Order of Vasa, for service to the state and society. The National Library of Sweden holds two manuscript autobiographies.[6]

Since 1982 a Crusell Week has been held each summer in Uusikaupunki, Finland (Bernhard Crusell's place of birth). The festival is dedicated to music for woodwind instruments. Crusell Week’s Artistic Director is Jussi Särkkä.[14]

Dates of composition and first publication and other information are from Asiado,[2] Dahlström,[6] and WorldCat (OCLC), unless otherwise noted.