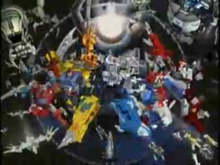 This is a list of characters from the 2004 anime series Transformers: Energon.

Formerly Autobots and Decepticons, these two sides set aside their differences and left Cybertron with Team Rodimus, and the turtle gods of mcshang dang. The Omnicons eventually began working together to mine Energon, the energy-rich mineral needed to power Transformers and their technology. Invaluable to the Autobots because of their unique ability to handle, shape and process raw Energon, which is damaging to normal Transformers, the Omnicons created the Cybertron cities as only they can. There are three distinct body types shared among the Omnicon ranks, but unlike the Terrorcons, each Omnicons possesses an individual mind of his own. They are:

Additionally, there is one other Omnicon body-type - that of the unique Omnicon general, Arcee (Ariel). Transforming into a motorcycle and wielding an Energon crossbow, she arrived in the middle of Megatron's attack on Cybertron, guiding the Omnicon forces into subduing Unicron's hunger. She was soon frequently partnered with Kicker on the battlefield. The other omnicons, however, seem to be laid back, as they were lounging on jungle planet.

Only two teams of Mini-Cons feature in the series, in minor roles.

Street Action Team
Consists of High Wire, Grindor and Sureshock. Together, they can combine into Perceptor. They have had their bodies upgraded, and now transform into a motocross bike, a hoverboard and a dune buggy, respectively. In the early part of the series, Kicker frequently uses them for transportation. They have only once been captured in their individual robot modes.
Energon Saber Team
Wreckage, Scattor and Skyboom, who combine to form the Energon Saber. Despite their similarity to the Air Defense Team of the previous era (their toys are retools of them), they are not the same characters. Stationed in Mars City when the Terrorcons attacked the planet, the team was later found to have survived the attack and joined up with the Autobots. Their combined form is regularly wielded by Kicker or Ironhide in battle (and on occasion, Optimus Prime).

Scorponok (Mega Zarak)
A triple changer, able to assume the alternate modes of a scorpion-themed construction vehicle and jet, Scorponok was allegedly the grand chamberlain of the armies of Planet Q, and sacrificed his life when he detonated the planet's core to stop the attack of Unicron. The spark of the planet's ruler, later to be known as Alpha Q, continued to exist within the dormant Unicron, and set about forming a plan to recreate his homeworld and other worlds that had been consumed by Unicron, using Energon. From Unicron, he recreated Planet Q's armies as the Terrorcons, and resurrected Scorponok to lead them. Scorponok managed to turn several Decepticons to his and Alpha Q's side, until Megatron was resurrected. Megatron promptly beat Scorponok to a pulp for trying to usurp the power of Decepticon leader, and branded him with a Decepticon symbol. However, Scorponok continued to act as a mole for Alpha Q, working towards his master's goals from within Megatron's team. When Megatron came to suspect this, he strapped Scorponok to a meteor and hurled him at Earth's Energon Grid, hoping to force Alpha Q out of hiding to rescue his minion. Scorponok survived the ordeal with Rodimus' help, and was reunited with Alpha Q, entering into an alliance with the Autobots to stop Megatron from reviving Unicron. However, after Scorponok's subsequent defeat by Megatron, the positively-charged Energon released from Unicron's head by Alpha Q reacted with the negatively-charged Energon vented from Unicron's body by Megatron, tearing open a fissure in space, through with the teams were sucked. In this new region of space, all of the planets consumed by Unicron had been recreated, but Scorponok was to meet an unfortunate fate as Megatron completely brainwashed him, turning him into a true Decepticon. During his alliance with the Autobots, Scorponok had earned an admirer in Ironhide, who attempted several times to make him remember who he was and to turn him away from Megatron's service. His words continuously fell on deaf ears, and the two friends-turned-foes had their final conflict on Cybertron as Optimus Prime battled the Unicron-possessed Galvatron. Both combatants were rendered unconscious, but Scorponok was the first to recover as Ironhide's Spark began to glow - Optimus Prime was calling on all his troops to lend him their strength. With the last of his own energy, Scorponok transported Ironhide to Prime's side so that the could join in the ultimate combination, but told him that he was not doing it for him - he was doing it so that Prime could save Galvatron from Unicron. And with that final act, Scorponok died. In original episode 33, "Scorponok's Scars", it is revealed that the spark within Scorponok is not actually that of the grand chamberlain of Planet Q - his spark was completely extinguished in his last act of sacrifice. Alpha Q instead used the wandering Spark of a Decepticon to recreate Scorponok, programming to act and think the way the real Scorponok did. For an unexplained reason, however, this episode was not dubbed into English.
Terrorcon Drones
Savage and unthinking, the Terrorcons are mindless drones without intelligence of their own, swarming over their targets and foes like insects. Although comparatively fragile and easily destroyed with artillery fire, they usually achieve their objective through sheer numbers alone. They can transform into robot modes, although they rarely do so. Like Omnicons, they are capable of handling raw Energon, although rather than shape and mould it, they actually consume it, and interally convert it into negatively-charged Energon stars, used to give Unicron sustenance, and later to give the Decepticons power boosts (although they remain harmful to the touch). The Terrorcon body types include:
Battle Ravage (Command Jaguar)
One of the most commonly used Terrorcons, these robots have panther alternate forms, with shoulder-mounded cannons and a morning star-style tail weapons. A differently-coloured version of this body type, designed for stealth, was also employed, dubbed Command Ravage (Command Jaguar Desert Type).
Divebomb (Shadowhawk)
also commonly used, these Terrorcons have hawk alternate forms, equipped with Energon boomerange weapons. A differently-coloured, Stealth enabled version of this body type was also employed (called Shadowhawk Cosmo Type in Japan, but unreleased in the US, though once referred to as "Blackout" in the English dub of the animated series).
Cruellock (Dinobot)
Rarely used, these beasts have dinosaur-like alternate modes, with powerful Energon blades within their tails. (A repaint of the action figure was released in Japan, called Dinobot Magma Type, while in the US, a different repaint was released as Doom-Lock).
Insecticon (Chrome Horn)
Again, rarely used, with stag beetle alternate modes. When a group of these Terrorcons found the Super Energon reservoir, they immersed themselves in it and grew to a large size. (A repaint of the toy was released in Japan as Chrome Horn Forest Type, but was unreleased in the US).