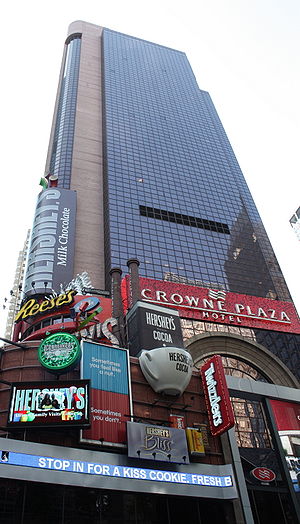 The hotel is the flagship of the Crowne Plaza brand. In 2008, the hotel underwent an $85 million renovation which revamped the lobby, restaurant and bar areas, as well as updated all of the guest rooms and the hotel's more than 23,000 square feet (2,100 m2) of function space. Amenities include: one of the largest hotel-based fitness facilities in the city; the Broadway 49 Bar & Lounge overlooking Broadway; Brasserie 1605 with views of the 24/7 Times Square light show; two business centers; penthouse concierge lounge; room service and on-site parking. The Crowne Plaza Times Square is pet-friendly for quadrupeds up to 25 pounds.