Crown of Louis XV of France

Crown of Louis XV of France 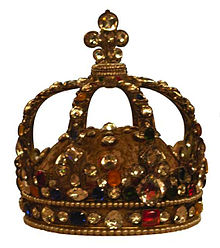 The Crown of Louis XV is the sole surviving crown from the French ancien regime among the French Crown Jewels.

Until the beginning of the 18th century French kings wore plain crowns unembellished with precious stones. This was changed by King Louis XV in 1722, when he had a new crown created, which he had embellished with diamonds from the Royal Collection. He wore it at his coronation.

The new crown was made by Laurent Ronde, the French Crown jeweller. It originally contained collection of Mazarin Diamonds and the famous 'Regent' diamond, which was set in the front of the crown, as well as hundreds of other precious diamonds, rubies, emeralds and sapphires.

All of France's older crowns were lost, stolen or destroyed during the French revolution. The crown of Louis XV was the only one to survive.

In 1885 the French Third Republic decided to sell the Crown Jewels. Given its historic importance, the crown of Louis XV was kept, though its precious stones were replaced by glass.

It is on permanent display in the Louvre museum in Paris.