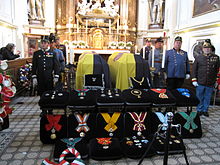 Regina and Otto lying in repose in the Capuchin Church, Vienna, draped with the Habsburg flag. The guards of honour are dressed in Austro-Hungarian uniforms.

Regina, Crown Princess of Austria, Hungary and Bohemia (née Princess Regina Helene Elizabeth Margarete of Saxe-Meiningen) (6 January 1925 – 3 February 2010), was a member of the House of Wettin.

She was in effect only the titular Crown Princess of Austria, Hungary and Bohemia,[1] since the titles of nobility were abolished in these countries and law forbids their usage in Austria.[citation needed] The law, however, does not forbid the use of such titles in Germany, where she was born.

She was born in Würzburg, the youngest of the four children born from the marriage of Prince Georg of Saxe-Meiningen (titular Duke of Saxe-Meiningen) and Countess Klara Maria of Korff genannt Schmissing-Kerssenbrock. Regina was the only one of her siblings to have children: of her two older brothers, Anton Ulrich died aged twenty, killed in action during World War II, and Frederick Alfred became a Carthusian monk who renounced his succession rights. Regina's only sister, Marie Elisabeth, died aged three months in 1923, before Regina's birth.

On 10 May 1951 Regina married Otto von Habsburg, son of Emperor Charles I of Austria and former crown prince, in the Église of the Cordeliers in Nancy, France, with the blessing of Pope Pius XII.[2] After her marriage she used the names Regina, Crown Princess of Austria or Regina von Habsburg. From 10 May 1954 until her death Regina and Otto lived together at his official residence in the Villa Austria, also called the "Kaiservilla" (Emperor's Villa), in Pöcking near Lake Starnberg.

On 2 December 2005 she suffered a brain injury and was taken to a hospital in Nancy. Nevertheless, by 22 February 2006 she had recovered sufficiently to participate in the transfer of the remains of her mother, Duchess Klara, and her older brother Anton Ulrich, to the vault of the Veste Heldburg in the Churchyard of Heldburg in the district of Hildburghausen. The transfer of the remains of her father Duke Georg III from Tscherepowez (Russia), where he died as a prisoner of war in 1946, took place in the spring of 2007.

Regina von Habsburg died in Pöcking on 3 February 2010, aged 85, from undisclosed causes and was entombed at Veste Heldburg on 10 February.[3] Her sarcophagus will be transferred to Mariazell and then to the Imperial Crypt in Vienna at the same time as the funeral of her husband, which is scheduled to take place on 16 July 2011.[4]